Relegated to the opposition benches and about to lose both budgets and political influence, the ultra-Orthodox parties are angrily attacking Prime Minister-designate Naftali Bennett. 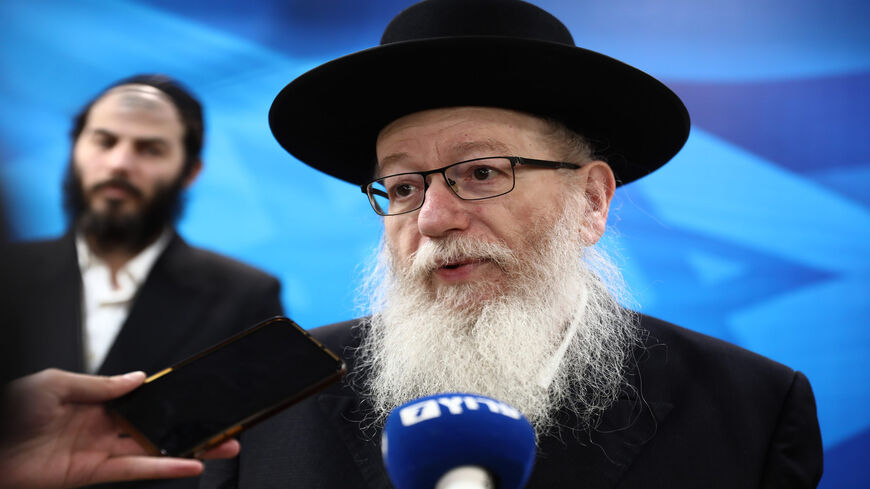 Leaders of Israel’s ultra-Orthodox parties mounted a furious, unrestrained attack on Naftali Bennett on June 8, with Minister Yaakov Litzman of the United Torah Judaism party accusing the prime minister-designate of “disgracing” the yarmulke he wears and demanding he remove it.

Litzman accused Bennett of forming a radical left-wing government lacking moral values. He warned that the so-called government of change would annihilate Israel’s Jewish identity by allowing liberal conversions to Judaism, imposing the military draft on ultra-Orthodox men instead of allowing them to dedicate themselves to Torah study, allowing civil marriage and public transportation on the Jewish Sabbath and recognizing the Reform stream of progressive Judaism.

Litzman’s harsh lament was delivered at the Knesset, during a dramatic press conference convened by ultra-Orthodox lawmakers, hours after Knesset Speaker Yariv Levin announced that the new Bennett-led government would be sworn in June 13. By scheduling the vote on the new government, Yariv dashed ultra-Orthodox hopes that their longtime ally, Prime Minister Benjamin Netanyahu, would pull a rabbit out of his hat at the last minute and save them from the opposition benches.

Convening what they termed an “emergency” meeting, the ultra-Orthodox vowed to fight the “wicked” government, calling it a spiritual and material threat to the denizens of the Holy Land. They also warned against a government that will cooperate with the Reform movement, which they regard as a desecration of true Judaism.

Indeed, change is in the air. The two main ultra-Orthodox parties, United Torah Judaism and Shas, have enjoyed a long and fruitful alliance with Netanyahu. They were members of Netanyahu-led coalitions for all but two of their 12 years, only being excluded from Netanyahu’s third government after the 2013 elections by an alliance forged between two rising stars of Israeli politics — Bennett and Yesh Atid leader Yair Lapid.

The ultra-Orthodox returned to government in 2015, their deep allegiance to Netanyahu undeterred by his criminal indictment on corruption charges. They refused to abandon him even after he instigated four consecutive elections in two years, failing each time to obtain sufficient votes to form a new government despite the support of their constituents. Netanyahu enjoyed their guaranteed backing while they basked in his power and the jobs and budgets it provided. Even if they had wanted to break with Netanyahu, their ultra-Orthodox constituents would have objected, reflecting the increasingly right-wing, pro-Netanyahu identity of their flock. Had direct elections been held for the premiership — rather than for political parties — as Netanyahu wanted in order to maintain his hold on power, he would have won big time among the ultra-Orthodox.

The ultra-Orthodox are now experiencing a rerun of the Bennett-Lapid alliance of 2013, this time with the participation of Yisrael Beitenu Chairman Avigdor Liberman, the finance minister-designate in the new government whose party will also control the Knesset’s Finance Committee, a position Netanyahu traditionally reserved for the ultra-Orthodox. This constellation — of two crucial budget sources in the hands of a blatantly anti-clerical party — is nothing short of a disaster for the ultra-Orthodox.

Not only will they be cut off almost overnight from a generous font of funding and influence and left to warm the opposition benches, they will face proposed legislation anchored in the guidelines of the new government that mandates the military draft of young ultra-Orthodox men. They could also be forced to teach math, science and English in their school systems, in addition to Bible studies, as a condition for government funding.

Another impending nightmare scenario is the expected formation of a commission of inquiry, as per the demand of Defense Minister Benny Gantz, to investigate the April 30 stampede at a religious festival that killed 45 ultra-Orthodox Jews. Many observers view the tragedy — billed as Israel’s biggest civilian disaster — as a reflection of the corruption endemic in the top ranks of the ultra-Orthodox parties and their varied offshoot organizations, in violation of the laws of the state and a preference for religious ritual over the sanctity of human life. Ultra-Orthodox parties have thus far prevented formation of an inquiry commission, fearing its findings would point the finger of blame at senior leaders of their communities.

But perhaps their biggest frustration and anger stems from seeing Ra’am, a religious Islamist Arab party, joining the new government and being rewarded with much of the benefits of which they themselves are being deprived — mammoth budgets and jobs.

Although it was Liberman who ruled out any participation by the ultra-Orthodox in the new government, Bennett is also being cast as the bad guy, a heartless and immoral politician defrauding them out of their rights. They insist this is particularly egregious given the fact that he is a religious, right-wing ideologue who had assured them he would do everything it takes to forge a right-wing government with Netanyahu. Instead, they are at the mercy of a government with what they regard as distinctly left-wing, secular overtones, and Netanyahu cannot save them.

The extent of the ultra-Orthodox rage at Bennett was illustrated clearly in the ugly personal assault its leadership mounted against him. Knesset member Moshe Gafni, the longtime chair of the Knesset Finance Committee, sounded particularly bitter, calling Bennett a “wicked” man. “Such a thing has never happened,” he shouted, waving his fist as he faced lawmakers and journalists in the Knesset. “There will be a war over God’s desecration.”

Gafni called the coalition agreements reached between the parties of the new government “despicable sacrilege,” adding, “I have been in the Knesset for many years. I cannot recall such a paper. … What sacrilege! I do not remember anything like this! … There was never a government that dared do such a thing.”

Calling Bennett “that wicked man who supposedly wears a kippah [yarmulke],” he accused him of forming an anti-religious government, and pledged “to erase this wicked government from the face of the land. Do not talk to us, get out of our face.”

Bennett’s response only served to inflame the ultra-Orthodox fury further. “As prime minister, I will take care of the ultra-Orthodox public and of the Torah world,” he said in a statement. “To the ultra-Orthodox citizens of the country I say, again, 'You have nothing to worry about. On the contrary, the past year has shown that you are the ones who pay, with your very lives, for a political culture of neglect, nepotism and the perpetuation of problems.’”

Not to be outdone, the ultra-Orthodox ramped up their assault, saying that Bennett should hold the title of the biggest liar in Israeli politics. In addition, they ordered a boycott of Bennett. The ultra-Orthodox radio station Kol Hai announced that it would not broadcast the vote on the new “left-wing” government and its swearing in next week [June 13], and would instead air a live prayer session to strengthen its “hundreds of thousands” of listeners.

The ultra-Orthodox parties have been banished to the opposition in the past, but this time the move is likely to have significant repercussions for Israel’s political system and for the ultra-Orthodox leadership, the nature of which cannot be assessed at this time.