The defeat of the trained Iraqi army in Mosul has made many Israelis worry about worst-case scenarios on its own borders. 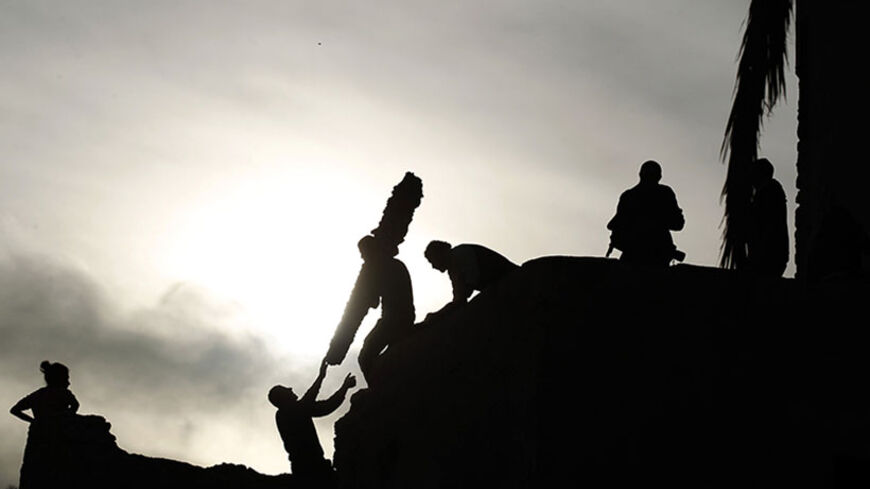 Palestinian and foreign activists remove debris from a structure in an old village known as Ein Hajla, in the Jordan Valley, Jan. 31, 2014. - REUTERS/Ammar Awad

While kidnappers abducted three young Israelis in the Hebron region as they were on their way home, Umm Mazen, the wife of Palestinian President Mahmoud Abbas, was undergoing surgery in a Tel Aviv hospital on June 13. The fate of the boys remains unknown. Right now, Syrians wounded in the bloody civil war are receiving treatment in Israeli hospitals.

While the Israeli public is consumed with worry and anguish, it can barely hear the call by call by President Abbas for the abductors to release the Israelis, but can clearly see the Internet campaign in which ordinary Palestinians are shown waving three fingers, each representing one of the kidnapped boys. There is nothing surprising about this campaign, but there has been some progress since the last visual of a hand gesture glorifying an act by a Palestinian that traumatized the Israeli psyche. In that searing image, from Oct. 12, 2000, Aziz Salha waved his bloodied hands from the window of the Ramallah police station after participating in the lynching of two Israeli soldiers. The Palestinians taking part in the current campaign will still have to contend in the future with the hatred in their hearts. No one appointed me their psychologist, but I am suggesting to them that they turn away for a moment from their obvious bitterness — I do not contest their rights to national sovereignty — and invite them to look at what is happening to the north and the east, because there is a clear connection between the relatively good conditions that the Palestinians enjoy and Israeli security control.

In Mosul, a city of two million people, 800 jihadists were able to defeat 30,000 soldiers and 25,000 police without a battle on June 10. The United States invested $15 billion in the Iraqi army, and it was $15 billion too much. The defense forces were funded and trained by the United States, but they did not fight. They even left their shoes behind when they fled. The most common image from events in Mosul was of policemen and soldiers hastily removing their uniforms while fleeing and ditching their weapons. Fear was one of the reasons why the Iraqi defense forces collapsed in such an astonishing manner this week. It is easy to understand why.

When fighters from the Islamic State of Iraq and al-Sham (ISIS) took the cities of Mosul and Tikrit this week, their enemies faced a terrible fate. While Tel Aviv’s gay, lesbian, bisexual and transgender community was taking part in the annual Gay Pride Parade along with thousands of tourists from around the world, it was hell on earth in Mosul. Videos and photos of the shooting of thousands of captives reminded many of the photos of the actions of the Einsatzgruppen, the German death squads that murdered the Soviet Jews during Operation Barbarossa. In Mosul, however, it was not Germans killing Jews in the name of some insane racial theory, it was Muslims killing other Muslims in the name of religious zealotry.

The news coming from Mosul created a new context for recent events in the Palestinian territories. There is no debate over the Palestinians’ right to self-determination and national sovereignty, but what happens when values collide? What happens when the demand to establish an independent state clashes with the basic goal of living, or as the German philosopher Arthur Schopenhauer called it, the will to live? As long as the Israeli army maintains its position on the eastern boundary and controls the Jordan Valley, it is not only protecting the lives of my children. The Israel Defense Forces are also protecting the lives of the Palestinians. That, and the way the Americans’ huge investment in the Iraqi army failed, is why the Barack Obama administration’s idea that Israel withdraw from the Jordan Valley in exchange for security guarantees from the United States has sunk.

With the Middle East seething, and convulsing as it is today, there is no way that the Palestinians should be granted total sovereignty, or in other words, security responsibility for their fate. Most of all, it would be suicide for Israel, and the Palestinian Authority as well, if they were to open the floodgates on the east to the many millions of Palestinian refugees journeying to their new state. One could imagine that the entry of millions of refugees might also introduce the death tourism of al-Qaeda and representatives of ISIS.

That is why, when the national aspirations of the Palestinians clash with the basic desire of my children and me to live, when full Palestinian sovereignty, at least in the minds of many Israelis who entertain this worst-case scenario, means that ISIS and al-Qaeda would not only be on our borders, but possibly living among us, I prefer to prevent full sovereignty in favor of an autonomous framework for the Palestinians with an Israeli security control.

The solution is not morally perfect. It can also be assumed that this would exacerbate the boycott of Israel and lead to condemnation in a veritable babel of languages. On the other hand, if I had to choose between that and the possibility of an psychopath eating my bleeding heart, as a soldier from a rebel Syrian faction is seen doing with the heart of an enemy in a horrific video, I would choose the boycott.

The ability of the Palestinians to contend with ISIS gangs would likely be minimal at best. If the well-equipped Iraqi army fled from them, can we expect the Palestinians to withstand the jihadists? Would they seek a kind of government that would make Hamas look like a bunch of hippies from San Francisco? I assume that the gospel according to ISIS would leave Palestinian women unhappy. I assume that the vibrant nightlife in Ramallah would suffer a blow under such a repressive regime. Even the Hamas government that controlled Gaza based on religious law was not that popular with the Palestinians.

There is a reason why polls show that a majority of Israeli Arabs reject the idea of an exchange of territory between the Palestinians and Israel and becoming part of a Palestinian nation-state: Because despite all the difficulties they face in Israel, despite the discrimination and alienation, their lives in Israel are a hundred times better than the lives of their compatriots across the border. Their lives in Israel are not dominated by chaos. What do the Palestinians have to look forward to? The day that gay Palestinians can parade safely through the streets of Ramallah will be the day that an independent Palestinian state can live securely.