ISIS seen as liberators by some Sunnis in Mosul

Many Sunni residents of Mosul resented the Iraqi army as an occupying force. 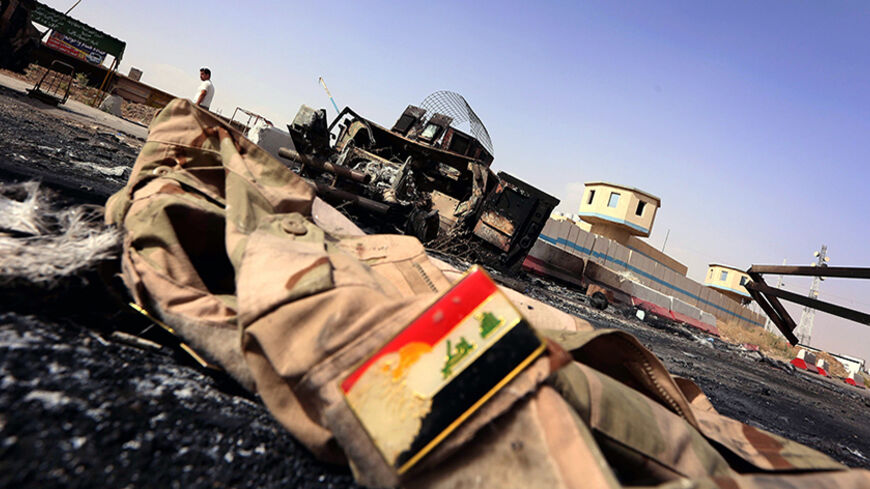 The jacket belonging to an Iraqi army uniform lies on the ground in front of the remains of a burned Iraqi army vehicle, close to the Kukjali Iraqi army checkpoint, some 10 kilometers (6 miles) east of Mosul, June 11, 2014. - AFP/Getty Images/Safin Hamed

DAHUK, Iraq — The Kurdistan Region of Iraq is dealing with an influx of Iraqi refugees following the takeover of Mosul and Tikrit by the Islamic State of Iraq and al-Sham (ISIS).

Dindar Zebari, the Kurdistan Regional Government (KRG) assistant head of the Department of Foreign Relations, announced in a press conference that approximately 500,000 refugees arrived in Iraqi Kurdistan, with about 180,000 refugees in Dahuk and 100,000 in Erbil. The KRG will build three camps near the entry checkpoints of Erbil and Dahuk.

On June 11, the Kurdish security forces took over the Rabia border crossing, replacing Iraqi soldiers who fled, and have mobilized along Kirkuk and disputed areas.

Tiswa Mahmud, an Iraqi citizen from the countryside of Mosul, told Al-Monitor how she fled.

"I slept with my son in the hospital, which was bombed. The Iraqi army surrounded the hospital. We did not have food or water for days. I do not know who shot us. After this, we fled to Dahuk," she said.

Omar Abdulsami, a member of the Iraqi army and a Kurd, told Al-Monitor they fought ISIS close to a hospital. "But when a car bomb exploded, we fled, and left our positions," he said.

According to Abdulsami, the Iraqi army could have defended Mosul, if they stood their ground.

"If just 300 soldiers defended Mosul, we could defend all of Mosul. But in the Iraqi army, only the Kurds fought. Even off-duty Kurdish soldiers helped us. The police even helped Daash [ISIS] against the Iraqi army and gave their cars. I blame this on [Iraqi Prime Minister Nouri] al-Maliki and his friends."

Yunis Ibrahim, a member of the Kurdish Zerevani forces, said that at one point there was an accidental skirmish between ISIS, Kurdish forces and the Iraqi army, which wanted to open the road to flee Mosul.

Some civilians who fled Mosul suggest that the Iraqi army — with soldiers mostly from provinces in southern Iraq — is weak because they are not well-liked in Mosul.

Al-Monitor witnessed Iraqi soldiers on June 1 randomly firing shots in the air in the streets of Mosul, and stopping and harassing the local population.

The inhabitants of Mosul see the Iraqi army as a Shiite occupation army from Baghdad, and some civilians welcomed ISIS when they entered Mosul and removed all Iraqi army checkpoints.

Atheel al-Nujaifi, governor of Ninevah province, has reportedly lobbied for local police to replace the Iraqi army in Mosul, but Baghdad maintained its military presence, which is deeply unpopular with many residents.

Sunni Arabs and Kurds from Mosul, especially, had no good words for the Iraqi army's deputy chief, Abboud Qanbar, and the head of the Ninevah Operations Command, Mahdi al-Ghrawi, suggesting they had arrested innocent civilians and were involved in corruption.

"The Iraqi army oppressed the people, they stole their money," said Ali Ahmed, a driver, who was shot while fleeing Mosul.

According to Ahmed, the local population in Mosul welcomed ISIS. "The people in Mosul do not like Daash, or Maliki, but they now feel better under Daash, and water and electricity returned."

Ahmed al-Ghadra, 74, a former resident of Mosul, told Al-Monitor the army mistreated him. "The Arab Iraqi people want Maliki to go to prison. He is a traitor. Fourteen Daash members come, and the whole Iraqi army flees. The people of Mosul do not want the Iraqi army in Mosul. I'm an old man, and they stopped me for one hour at a checkpoint, using bad language."

More witnesses confirm that ISIS treated the civilian population well, and told them that they would only punish those who work with Maliki. Basma Mohammed told Al-Monitor that the situation was horrible in Mosul. "We had no water, no food in Mosul, but now everything is back. They [ISIS] told the people to go back to Mosul."

Dr. Omar al-Faris, from Mosul, who works in the Dahuk emergency hospital, told Al-Monitor that the population welcomed ISIS because they removed all the checkpoints. "Before, it took two hours to get somewhere. Now the civilians are free to move. All of them are happy that the Iraqi army left."

Mohammed Saad Ali from Mosul, whose son was hurt in the crossfire, told Al-Monitor he is not hopeful about the future. "I do not think the Iraqi army can get Mosul back again. For 10 years there was no stability. It is in the hands of God."