The fall of Mosul into the hands of the Islamic State of Iraq and al-Sham (ISIS) is an indicator of the breakdown in the Iraqi army, and shows the necessity to unify the ranks in Iraq to fight terrorism. 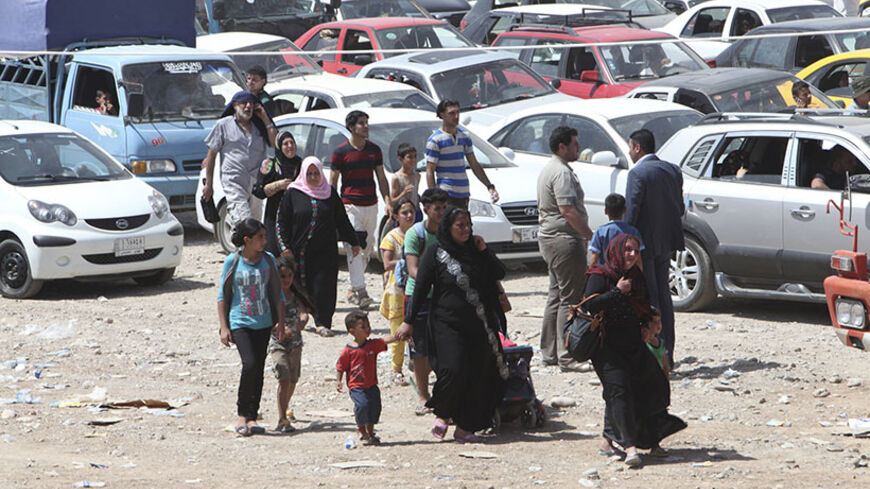 Families fleeing the violence in Mosul arrive at a checkpoint on the outskirts of Erbil, June 10, 2014. - REUTERS/Azad Lashkari

The Islamic State of Iraq and al-Sham’s (ISIS) invasion of Mosul, the second-largest Iraqi city in terms of population, on June 10 did not come as a surprise, especially since the group has carried out similar operations in the past few weeks.

This indicates a change in ISIS strategy and shows its intention to spread the group’s influence through exploiting the official failure to attract the locals in the Sunni regions.

However, the quick fall of the Iraqi army and its confused withdrawal from all parts of Mosul, then from several regions of Kirkuk and Salahuddin, shocked the Iraqi people and politicians, and even the prominent Iraqi army leaders who left Mosul for Erbil, then returned to Baghdad.

The Iraqi government, which admitted to the fall of the army in Mosul, announced that strict punishment will be brought against the soldiers and officers who ran away or backed down, in an attempt to oblige them to stand their ground in the future. The government also called for declaring a state of emergency to control the situation and promised to arm whoever opposes ISIS. In addition, the government is declaring a state of general alert in the country.

Meanwhile, the supreme Shiite cleric Ali al-Sistani called on everyone to unite to face the threat.

Moreover, the Kurdistan Regional Government (KRG) condemned what it considered a security failure that led to the fall of Mosul and confirmed that the Iraqi government did not coordinate with Kurdistan regional authorities.

The incidents attracted regional and international interest, and UN Secretary-General Ban Ki-moon expressed his concern in the wake of ISIS's takeover of Mosul.

Meanwhile, the United States is considering providing "kinetic support," which could include airstrikes, to help Baghdad strike back in a strong and appropriate manner.

The situation, in general, invokes three important questions: Why did the Iraqi army fall? What are ISIS’s future plans? How will the Iraqi authorities behave?

Al-Monitor received many testimonies from soldiers and officers who withdrew from Mosul. They all agreed that confusion in military decisions led to this collapse.

Officers, whose ranks range between captain and major, confirmed that the army had received orders to withdraw early in the morning of June 11 and that the orders included leaving weapons and equipment behind. However, a top military commander in Mosul confirmed to Al-Monitor that what happened amounts to comprehensive disobedience on the part of junior officers and soldiers who refused to obey orders. The commander claimed that insubordination spread like an epidemic to all military units. Facing this psychological breakdown, unit leaders had no choice but to withdraw.

According to witnesses, the government forces in Mosul include two army divisions, numbering up to 25,000 soldiers, along with up to 10,000 units belonging to the federal police, and an estimated 30,000 local police officers.

The “private ballots” reports on the Iraqi elections, which took place in April in the city of Mosul, show that 78,000 security and military personnel in the city took part in the elections. Reports conflict regarding the size of the fighting force mobilized by ISIS to occupy the city, with figures ranging from 2,000 to 3,000 fighters.

The best explanation of the collapse of the Iraqi military — which spilled over on the same day to the cities of Siniya and Beiji in Salahuddin province, as well as Hawija, Sulaiman Bek and Rashad in Kirkuk — is a fundamental flaw in planning, leadership and training. These have been defects in the Iraqi security forces over the past few years, despite their receiving sophisticated equipment and weapons.

Throughout the years, Baghdad has failed to produce a professional army or provide efficient training programs, hence the clear hostility between the population in Sunni areas in general and the army, whose members mostly hail from Shiite areas in central and southern Iraq.

This failure is definitely linked to the inability to represent all demographics within the military, something the Sunnis have complained about for years.

Meanwhile, the pressures to which the army and police forces were subject in the months that followed the outbreak of fighting in Anbar since late 2013 have in turn affected the efficiency of the security establishment.

Regardless of the reasons behind the security collapse, ISIS did not imagine it would be able to control large areas so easily without actual combat. Therefore, it will definitely develop its strategy to play on the collapse of the army, especially since it now possesses weapons and ammunition belonging to the two routed divisions, along with key stores of weapons at the airport in Mosul, where gunmen are believed to have taken helicopters.

Indeed, ISIS progressed toward the cities of Beiji, 170 kilometers (105 miles) southeast of Mosul, home to Iraq’s largest oil refineries, and toward Kirkuk, 160 kilometers (99 miles) southeast of Mosul, where oil wells are located. It was also keen to control the Syrian border, particularly the border crossing of Elierbeh, the Syrian part of which is controlled by the Free Syrian Army.

In fact, ISIS will not need to disperse the troops that entered Mosul outside the city because it has sleeper and active cells, from the southern parts of Mosul to Baghdad’s northern border. It also has similar cells in Baghdad’s western, eastern and southern borders, making the capital the group’s main target. Nevertheless, heading toward a major war at the gates of Baghdad cannot be one of ISIS's immediate plans. The group would need to capture areas to allow them to control Baghdad, win the support of the population and get fighters and logistical support.

The Iraqi government and political forces must respond to the developments in a systematic manner and invest everything to make a move. The government needs to remedy the serious mistakes made in recent stages that undermined social peace and political consensus. The return of the army and lifting its morale should run parallel to structural reforms in the army, starting with some of the key commanders who failed on more than one level. In addition, a comprehensive political consensus to fight terrorism is needed. This should include the support of the local population in areas under ISIS control and Sunni areas in general. Also, an appropriate solution to Sunni forces' demands is needed. It is possible to implement these demands, especially those that guarantee the minimum political and social consensus and do not challenge the core of the political process.

Moreover, the solution to the breakdown of political and military coordination between the central government in Baghdad and the Kurdistan Region of Iraq is now necessary. The strength of the Kurdish peshmerga forces can be an important factor in the war on terrorism. Moreover, it is not beneficial to neglect the great expertise of these forces, which exceeds the expertise of the regular Iraqi army in many fields.

In summary, the fall of Mosul and other cities to terrorist groups was preceded by political, economic, social and military failures. The solution to today’s issues require measures that are equal to the size of the crisis, namely remedies to reunite national ranks and abandon policies that have previously failed and led to a split between the government, the Sunnis and Kurds, in addition to a rupture among the Shiites themselves.