Obama administration gets it wrong on Hamas

The recent call by Palestinian President Mahmoud Abbas to protect Al-Aqsa Mosque might inflame an already volatile situation around the unity government, which the United States should refuse to recognize. 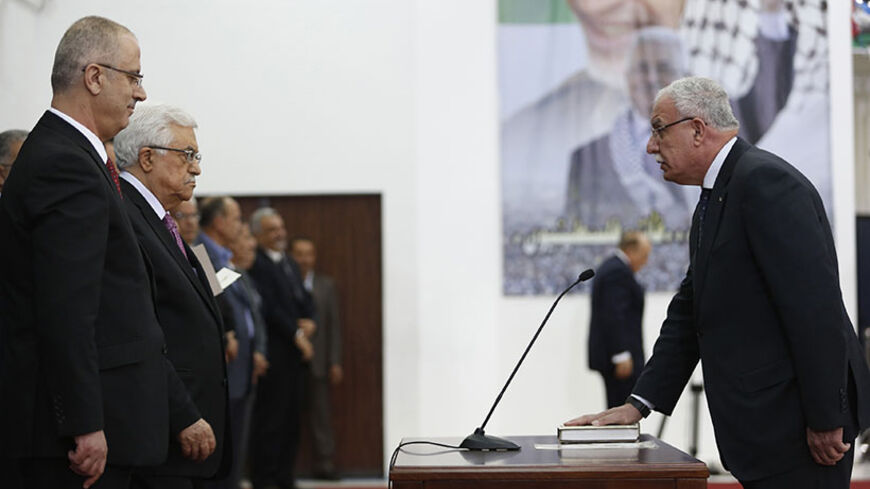 The chairman of the Palestinian Authority, Mahmoud Abbas, is playing with fire. Not two days had passed since the reconciliation government with Hamas was formed, when on June 4, Abbas called on Muslims around the world to take practical steps to defend the Al-Aqsa Mosque in Jerusalem. The two haphazard and hasty steps taken by the Palestinian Authority (PA) can be compared to crossing a deep chasm on a slender, electrified wire. When you are riding on a tiger’s back, you know how to get on the tiger, but it’s not at all certain you'll know how to get off.

Hamas, the PA chair's partner in the new government, is a terrorist organization that calls for the destruction of Israel. On June 14, 2007, this very organization seized power in the Gaza Strip in a violent coup that left many Fatah members running for their lives in terror. They fled to the Erez border crossing and pleaded to be allowed to enter Israel so they wouldn’t be thrown off the roofs of Gaza’s tallest buildings. It should be noted, by the way, that Israel was not indifferent to their pleas and saved many lives.

Furthermore, if rocket fire from the Gaza Strip on Israeli cities could once be traced back to the Hamas government headed by Ismail Haniyeh, the address had changed once the national unity government was formed. The zip code is now Ramallah. From now on the address is no longer Hamas in Gaza. It is no longer Haniyeh. It is Abbas himself. It makes no difference if the missiles from Gaza were fired by Islamic Jihad, groups tied to al-Qaeda or the Armed Resistance Committees. There’s a new boss in town, and his name is Mahmoud Abbas.

No less serious is Abbas’ dangerous call to Muslims to defend the Al-Aqsa Mosque. Abbas is well-aware that the government of Israel takes every possible step to protect the mosque, as if it was the apple of its eye. The right of Jews to worship freely in Israel suffered a dramatic blow because of the Israeli fear that the security situation could deteriorate. Jews visiting the Temple Mount are not even allowed to mutter to themselves, out of fear that they might mumble a prayer and thereby offend Muslims. The State of Israel is fully aware of how volatile the site is and acts accordingly. Its sole purpose in this regard is to maintain and protect the special status that Muslims have on the Temple Mount.

And yet, frustration apparently drove Abbas to release that thoughtless statement just two weeks after a Muslim militant affiliated with the jihadist groups in Syria was suspected of murdering Jews in Brussels solely because they were Jews. Israel sees this statement as incitement, even if there is no direct link between the jihadist who committed this crime and the Palestinian leadership. Still, the government of Israel must make it perfectly clear to Abbas that if his irresponsible and deceitful appeal to Muslims around the world results in any Israelis or Jews being harmed, there will be severe repercussions.

Another no less serious problem relates to the policies of the Barack Obama administration. It has decided to continue cooperating with Abbas, and by this, de facto recognizing the unity government. This includes providing it with economic aid expected to reach $440 million.

There was good reason for Israel’s Minister of Communication Gilad Erdan to express his regret at the "naivete" of the United States and the way it capitulated to Palestinian dictates. Israel’s ambassador to the United States, Ron Dermer, also deviated from the diplomatic protocol, when, in an unusually severe statement, he declared that Israel is “deeply disappointed” with the Obama administration’s decision to continue to maintain a working relationship with the new government in Ramallah. In a Facebook post, the ambassador referred to “the Palestinian unity government with Hamas, a terrorist organization responsible for the murder of many hundreds of Israelis, which has fired thousands of rockets at Israeli cities, and which remains committed to Israel's destruction.”

“Had Hamas changed, it would be one thing,” continued Dermer. “But Hamas hasn't changed. It remains as committed to Israel's destruction today as it was yesterday.”

The Obama administration abandoned ousted Egyptian President Hosni Mubarak, embraced the regime of former President Mohammed Morsi and the Muslim Brotherhood in Egypt, and was quick to express its reservations about the counter-revolution in which Gen. Abdel Fattah al-Sisi seized power in Cairo. Time and again, the Obama administration keeps proving its geopolitical shortsightedness and moral muddle. And it is not just Jerusalem and Cairo that wonder about the absence of any logic in the administration’s policies. The same is true of Riyadh as well. American actions in the Middle East over the past few years have created a vacuum into which the Russians and Chinese will eventually get sucked in.

Egypt has outlawed the Muslim Brotherhood, including Hamas. It has sealed its border with Gaza hermetically and shut down all the smuggling tunnels. Meanwhile, Obama extends a hand to Hamas.

Beyond Washington’s illogical behavior, its policies also suffer from a moral and ethical problem. Would the United States maintain any relations whatsoever with al-Qaeda or grant aid to any government that included members of al-Qaeda, even only as technocrats? Would the US administration extend a hand to any government, which includes anti-Semitic forces, whose ideas can only be described as a Nazi worldview?

How will Obama explain to his voters in general, and his Jewish voters in particular, that he recognized a government in which Hamas is a participant, even though Article 22 of the Hamas charter states: “The [Jews] enemies have taken control of the media. … They used this wealth to stir revolutions. … They stood behind the French Revolution, the Communist Revolution. … They stood behind World War I, so as to wipe out the Islamic Caliphate. … They established the League of Nations so that they could take over the world. … They also stood behind World War II. … They ordered the creation of the United Nations and the Security Council. … There was no war that broke out anywhere without their fingerprints on it.”

How can Obama reconcile his humanistic values with Article 7 of the Hamas charter, which refers to the war between Muslims and Jews on the day of judgment, saying that on that day, the rocks and trees themselves will call out, “O Muslim! O Servant of Allah! There is a Jew hiding behind me. Come and kill him!”

Congress in Washington has an important task ahead of it. It must put a stop to the administration’s intentions while they are still little more than that. It’s not too late to stop the train.