Israel should put Fatah-Hamas government to the test

The establishment of a Palestinian government culminates a decade of changes the Hamas movement is undergoing, offering Prime Minister Benjamin Netanyahu an opportunity to force it into changing its fanatical charter. 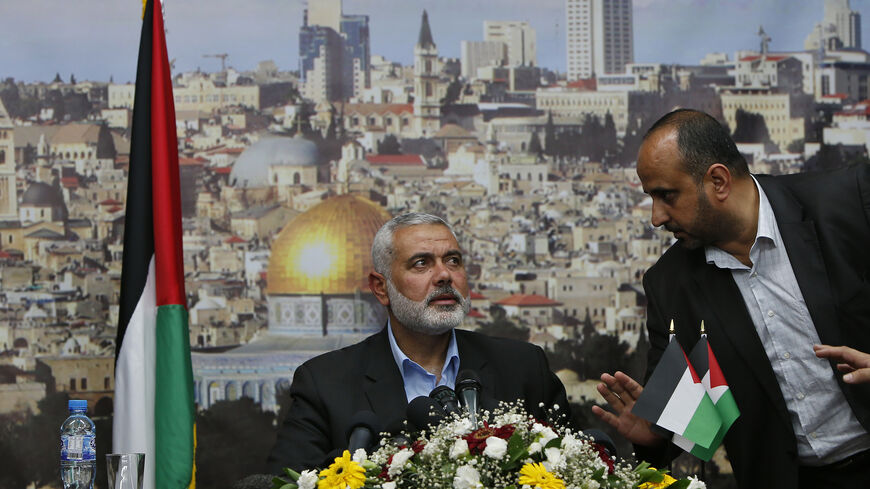 In December 1998, the Central Committee of the Palestinian National Council convened in Gaza to vote to change those articles of the Palestinian National Covenant that conflicted with the Oslo Accord. The committee was convened at the demand of then-Prime Minister Benjamin Netanyahu, who conditioned the continuation of negotiations and the implementation of the agreements on the covenant being amended officially.

The covenant defined the objective of the PLO as bringing about the end of the Zionist entity through military means. One of the articles that Israel demanded be changed was Article 22, in which the Zionist movement was defined as a political movement associated with imperialism, fascist in its methods, aggressive and racist in nature. Article 33, the final article of the covenant, states: "This Charter shall not be amended save by [vote of] a majority of two-thirds of the total membership of the National Congress of the Palestine Liberation Organization [taken] at a special session convened for that purpose."

The session convened in Gaza in the presence of then-US President Bill Clinton. Most members of the Palestinian National Council, including those defined as “master terrorists,” were allowed by Israel to enter the Gaza Strip for the occasion. Attendees included airline hijacker Leila Khaled and Abu Abbas (Muhammad Zaidan), head of the Palestine Liberation Front (PLF), who oversaw the hijacking of the Italian cruise ship Achille Lauro and the murder of an American citizen, Leon Klinghoffer.

Netanyahu, who was elected prime minister in 1996, was not satisfied with the letter that late PLO leader Yasser Arafat had sent to the late Prime Minister Yitzhak Rabin stating that the PLO recognizes the State of Israel and that the articles of the Palestinian Covenant are “inoperative and no longer valid.” He demanded a legal vote by the Palestinian National Council to amend the covenant. Yet even this symbolic vote, which took place in April of that year, was not enough for Netanyahu, who insisted that the amendment be approved by a two-thirds majority. The reason was obvious. Before he could implement the agreements, which he so vehemently opposed as chairman of the opposition, he had to have a significant public achievement that would somewhat allay the concerns of his supporters, who opposed the agreement. It’s worth noting that, even now, some right-wing circles in Israel claim that the aforementioned articles are still in effect. There was no secret ballot, they say, so the entire vote was invalid.

Netanyahu now finds himself in a similar situation. This time, however, the issue is the Hamas charter. Like the charter of the PLO, it calls for the destruction of Israel, but in much more violent terms.

In an Al-Monitor article on June 4, Erel Segal complained about the Obama administration’s quick decision to recognize the Palestinian unity government, composed of both Fatah and Hamas. “How can [President Barack] Obama reconcile his humanistic values with Article 7 of the Hamas charter, which refers to the war between Muslims and Jews on the Day of Judgment, saying that on that day, the rocks and trees themselves will call out, 'O Muslim! O Servant of Allah! There is a Jew hiding behind me. Come and kill him!'”

Indeed, no one disputes the fact that the Hamas charter is militant, religiously fanatical and racist and that it leaves no room for compromise. It declares that the only way to achieve its goals is through jihad. The charter was released in September 1988, after the start of the first intifada. At the time, the movement’s leaders wanted to prove to the Palestinian public that they were not supported by Israel, so that they would not be condemned as traitors and collaborators. On the other hand, it is also worth noting that the Islamic Center, the body upon which Hamas was built, received aid from the Israel Civil Administration and from then-Defense Minister Rabin. At the time they believed that the “religious people,” as they defined Hamas, would serve as a reasonable partner in dialogue and sane counterweight to the Fatah terrorists in the Gaza Strip.

Yet, for the past decade, Hamas has been undergoing a process of change, dictated by evolving circumstances. As a result, it is moving further and further away from the articles of its own charter. Hamas maintained contacts with Israel to obtain various cease-fires and prisoner exchanges, to propose a hudna (truce) based on the 1967 borders and more. Now Hamas is a partner in a unity government that recognizes the existence of Israel, as well as the principles set by the Quartet and all peace agreements signed in the past.

While Netanyahu may find himself in a situation similar to the one he faced in 1996, there is one important and significant difference: After being elected to his first term as prime minister, he was forced to contend with implementing the Oslo Accord, which he had previously opposed. Now he has to contend with a position that he himself formulated, which regards Hamas as an obstacle to peace and which considers its reconciliation with Fatah to be grounds for imposing sanctions.

In the 2006 election campaign for the Palestinian Authority, the leaders of Hamas did not rule out the possibility of changing various articles in the Hamas charter. Their goal was to be as successful as possible in the first elections in which they participated, and all means were acceptable to achieve that end, especially when various articles in the movement’s rigid charter conflicted with the changing circumstances.

In October 2005, just before the elections, in an interview with former Haaretz journalist Arnon Regular, Hamas co-founder Dr. Mahmoud al-Zahar said, “The Hamas charter is a matter for interpretation. It expresses a political and social position based indirectly on the Quran. … If I were to tell you that the charter could be changed, it would immediately be seen as a concession and the collapse of Hamas’ principles. No one is thinking now about changing the charter, but in principle it is not impossible.”

In another interview with Haaretz, professor Muhammad Azal, then leader of Hamas in Nablus, said that Hamas could change its basic charter and engage Israel in negotiations. “The charter is not a Quran book. Historically, we believe that all of Palestine belongs to the Palestinians, but today we are talking about a new reality and the need for political solutions in a reality that has changed.”

Hamas, like Netanyahu, finds itself today again at the same crossroad. Ever since the movement was founded and its charter was released, its leadership has been treading carefully between the raindrops, looking for a path between an extremist ideology and changing circumstances. It compromised again just now, when it joined forces with Palestinian President Mahmoud Abbas and entered a unity government, which was recognized by Washington. Just as Netanyahu once forced Arafat and Clinton to set out on an amendment journey in Gaza, he can now put the Palestinian government to the test. In so doing, he can stop the surge of international recognition for the new government. The prime minister must demand that Abbas take steps to change the position of Hamas, as a necessary prerequisite to democratic elections in the Palestinian Authority. Given the situation of Hamas today, it can be pushed into a corner, and it is well worth doing so before Israel finds itself in the corner instead.