A recent law to revoke the displaced status of Syrian refugees if they return to Syria was meant to prevent Syrians from voting in the June 3 elections. 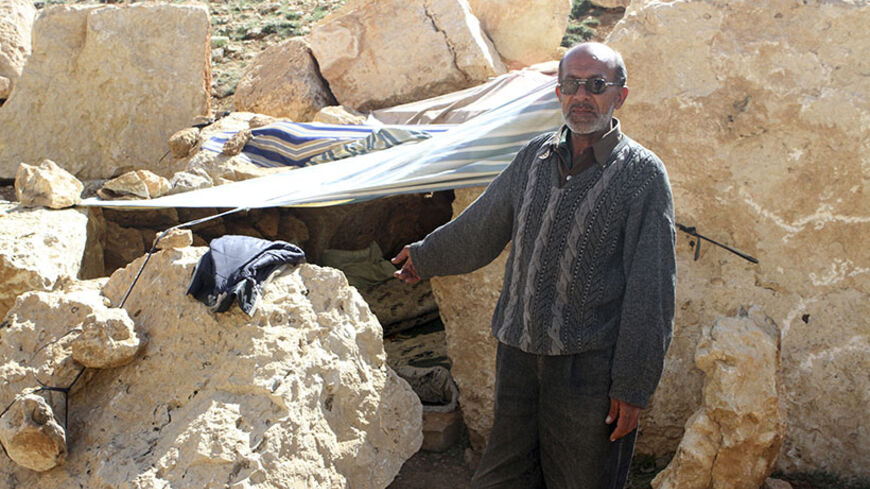 A Syrian refugee points at his makeshift home in Tfail village in the Bekaa Valley, April 22, 2014. - REUTERS/Ahmad Shalha

On May 31, Lebanese Interior Minister Nouhad Machnouk issued a decision to revoke the “displaced” status of all Syrian citizens registered as such in Lebanon if they return to the Syrian territories, effective June 1. This decision seems rational if one ignores the known political alignments of the region. However, in light of the divisions among Lebanese over the war in Syria, it seems that this decision has other, more complicated dimensions, which will likely deteriorate the situation of displaced Syrians in Lebanon.

The decision affects the nearly 1.1 million Syrian citizens registered as refugees on the lists of the United Nations High Commissioner for Refugees (UNHCR) in Beirut. Losing the displaced status will deprive Syrians in Lebanon of UNHCR aid. According to official sources who spoke to Al-Monitor, 600,000 people, more than 80% of them Syrians, have been crossing the border between Syria and Lebanon per month. The same sources estimated that a large part of these Syrians who cross the border regularly are registered as refugees in Lebanon.

Social Affairs Minister Rachid Derbas asserted the purely regulatory nature and background of this latest governmental decision. He told Al-Monitor that the decision had been under consideration since the Ministerial Coordination Meeting of Major Host Countries for Syrian Refugees in early May in the Jordanian capital. On the sidelines of the meeting, the Lebanese officials found that the Jordanian authorities, in cooperation with the UNHCR, are implementing a similar procedure to manage displacement and secure the greatest amount of aid for those who need it.

Derbas stressed that after it was decided to implement this procedure in Lebanon, preparations were carried out to begin implementation with the next session of the meeting of the countries neighboring Syria, which will be held in Beirut in mid-June 2014. There is nothing strange or suspicious about the interior minister’s move, according to Derbas.

They held the photos of President Bashar al-Assad and voiced their support for him. According to Lebanese politicians opposed to Assad, this is a previously plotted scheme by the Syrian regime and Hezbollah to prove that the regime is still present and active on Lebanese soil. Moreover, they believed that there was an underlying media message to the international community and global public that most Syrians, even the displaced, support Assad. When given the opportunity to freely express their opinions, like in Beirut, they are with Assad. This pushed political forces opposing Assad to demand the deportation of the people who voted for Assad and called for the expulsion of those who came out to support him in Lebanon.

As a result, according to the former minister, the Lebanese Interior Ministry’s decision constitutes a disguised threat for those people. They had a choice to make: Either maintain their displaced status in Lebanon, or vote for Assad. The former minister confirmed that this Lebanese governmental measure is part of a list of Western demands that were submitted to the Lebanese government a while ago and specifically demanding that Lebanon not facilitate the Syrian presidential elections designed to re-elect Assad.

But the surprise came after the ministry’s decision and the elections. Sources within the Interior Ministry confirmed to Al-Monitor that the measures the ministry had adopted were effective. According to its figures, fewer than 15,000 Syrians crossed the border on the day of the presidential elections on June 3. On the other hand, Syrian Ambassador to Lebanon Ali Abdel Karim affirmed to Al-Monitor that the Interior Ministry’s decision did not affect at all the flow of voters at the border crossings. He also said that the Syrian Embassy had coordinated with the concerned Lebanese authorities to facilitate the departure of voters and their return to Lebanon, and it has issued an official statement in this regard. Abdel Karim estimated that the number of voters crossing the border on June 3 was no less than the ones who had voted at the embassy in Beirut, and asserted that the number exceeded 130,000 voters. The ambassador's estimate seems more likely, given the chaos at the Lebanese-Syrian border, as well as the fact that preparations were not completed for the Jordanian surveying procedure mentioned by Derbas.

On the sidelines of all this, one thing is certain: the issue of Syrian displacement to Lebanon is growing more complex. It has gone beyond its original humanitarian, security and livelihood aspects to become a political and diplomatic issue. US Secretary of State John Kerry tackled this issue during his visit to Beirut on June 4. It is likely to become more complicated after the Lebanese political and governmental parties have grown more divided over it. This division might warn of different problems between the Lebanese people and the displaced Syrians as well as between the Lebanese authorities and the over 1,250 unregulated Syrian refugee camps in Lebanon, according to statistics from Derbas.