Controversial statements by Lebanese authorities point to growing frustration over the presence of more than 1 million Syrian refugees in their country. 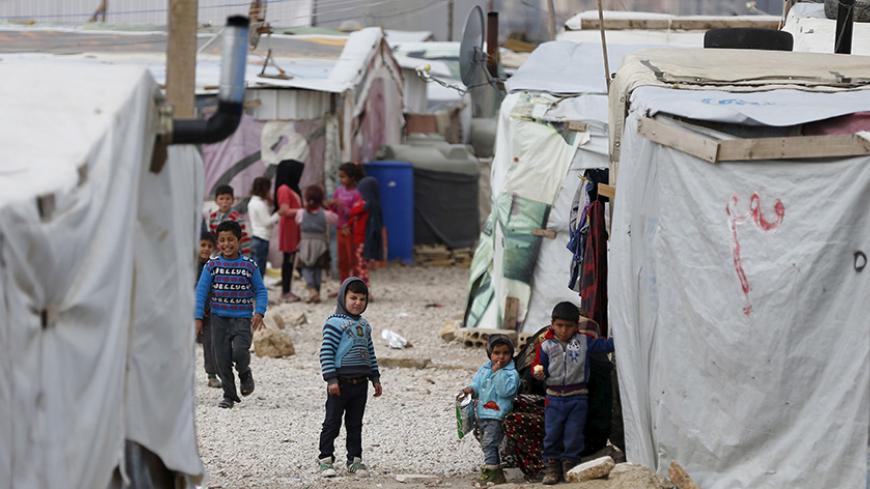 BEIRUT — ​As fierce fighting and bombardments continue across Syria since a fragile pause in hostilities shattered, a resolution has arguably never been further off. And in neighboring Lebanon, the Syrian refugee issue is becoming more and more a source of multiple tensions between communities, politicians and countries.

Clearly, frustrations are growing. Last week, some Lebanese ministers and politicians called for repatriation of Syrian refugees. While the proposal is being heavily criticized and shows little chance of succeeding, it reflects increasing vexation over the presence in Lebanon of an estimated 1.5 million Syrian refugees.

Foreign Minister Gebran Bassil drew early fire for saying Sept. 17 that Syrians and Palestinians who marry Lebanese women should not be conferred Lebanese nationality and adding that Syrians are “threatening our Lebanon." Then-Labor Minister Sejaan Azzi announced a controversial plan to ship refugees back to Syria over a two-year period starting in January.

Speaking at a Sept. 19 press conference, Azzi said his plan would place refugees into one of four groups — pro-President Bashar al-Assad, anti-Assad, neutral and “migrant” — before returning them to a “relatively safe space” back in Syria.

“There are safe zones,” Azzi claimed, “just no political decision or will to maintain the cease-fire.”

Syrians classed as “migrants,” estimated at around 250,000 people, would be the first to go, Azzi said, with a total of 1.2 million Syrians targeted for repatriation under the proposals.

The same day, Lebanese Prime Minister Tammam Salam offered up a similar plan at the United Nations Summit on Refugees and Migrants in New York, saying the “huge and sudden influx of refugees” beginning in 2011 now poses “dangerous risks to our stability, security, economy and public services.”

Salam suggested a system allowing for the “safe return” of Syrians, but later clarified that refugees would not be “forcibly deported.”

According to Azzi’s repatriation plan, Syrians with legal residency in Lebanon would not be targeted for return. But there’s a catch. Based on estimates from Human Rights Watch, some 70% of Syrians do not have residency, often because the $200 per-person renewal fees are beyond reach for a diaspora increasingly defined by poverty.

UN High Commissioner on Refugees (UNHCR) spokesperson Lisa Abu Khaled said the agency closely watches "developments in countries of origin to see when such returns would be possible — as this is the solution refugees dream of." However, "current conditions in Syria are not appropriate," she added.

“Recent events — including a deadly attack on a humanitarian aid convoy in Urum al-Kubra [west of Aleppo] — unfortunately demonstrate on a daily basis that the situation in Syria remains extremely unsafe and volatile at the moment,” Abu Khaled told Al-Monitor, adding that UNHCR will be ready to provide repatriation support “when refugees can return safely.”

“Lebanon has taken on a real burden in hosting more than a million Syrian refugees, but there is currently no area in Syria that would be safe for them to return to,” said Bassam Khawaja, a Lebanon researcher at Human Rights Watch. “Any involuntary returns to Syria would constitute refoulement and would be illegal under international law.”

Nasser Yassin, research director at the Issam Fares Institute at the American University of Beirut, told Al-Monitor the plans are “unrealistic” and reflective of “populist talk … being said to gain more support among the constituency of those politicians.”

Yassin argued that while involuntary returns are illegal and so won’t receive the support of UNHCR, the situation in Syria also requires realistic policy proposals.

“First, from a protection perspective, this cannot happen; second, this isn’t realistic. You’re going to put them on a bus and send them back to the borders?” he asked. “I don’t think anyone in the international community or from human rights organizations would facilitate any of this.”

Some areas of Syria might be safer than others, "but there is a lot of competition now for resources and there’s overcrowding in these areas" caused by the mass movement of more than 6.5 million internally displaced persons within Syria itself, he said.

Official participation in incitement against refugees and migrants in Lebanon appears to be getting worse, some say, which creates a second tier of discrimination on top of scattered outbursts of violence such as those seen on the outskirts of Beirut last week. Several people were wounded after Lebanese residents and Syrian refugees exchanged gunfire in Dohat Aramoun, some 20 kilometers (12 miles) south of Beirut, on the night of Sept. 20. According to the state-run National News Agency, the Lebanese army intervened after “heavy and intense exchange of machine-gun fire.”

While world leaders came together to pledge support for refugees and migration projects at two UN summits last week, the European Union is working with the Lebanese government to assist Syrian refugees.

The EU has already designated Lebanon as one of six “priority countries” for migration management and development projects. An initiative, part of the Partnership Framework endorsed in June, puts curbing migration at the top of the EU's foreign policy priorities and offers “incentives” such as trade deals and development aid for compliant partner countries.

Negotiations on detailed EU-Lebanese projects planned under the Partnership Framework are said to be ongoing, although a framework communication does mention improving infrastructure and services — including waste management, water, education and health — as well as economic opportunities for the “most vulnerable Lebanese communities.”

In return, the Partnership Framework asks that the Lebanese government “make efforts on the social and economic inclusion of Syrian refugees in order to improve their living conditions and legal residence status.”

The presence of well over 1 million Syrian refugees has had an impact on Lebanon's society, economy and national politics that is not hard to divine.

While debate around repatriation is likely to continue in Lebanon, last week’s plans and statements reveal more deep-seated issues with refugee policy — both in Lebanon and Europe.

“The refugee issue [in Lebanon] has become now, like many other places in the world, a subject for political contention, and some politicians use it to gain more votes and show that they are protecting the benefits of their populace. Unfortunately, this is where we are,” Yassin told Al-Monitor.

However, he added, Europe “can’t just ask Lebanon to keep all those [refugees] … and just send in money.”

“Europe needs to show this part of the world, in addition to the money and support and concessions and so on … the goodwill and solid actions to resolve the war in Syria,” he said.