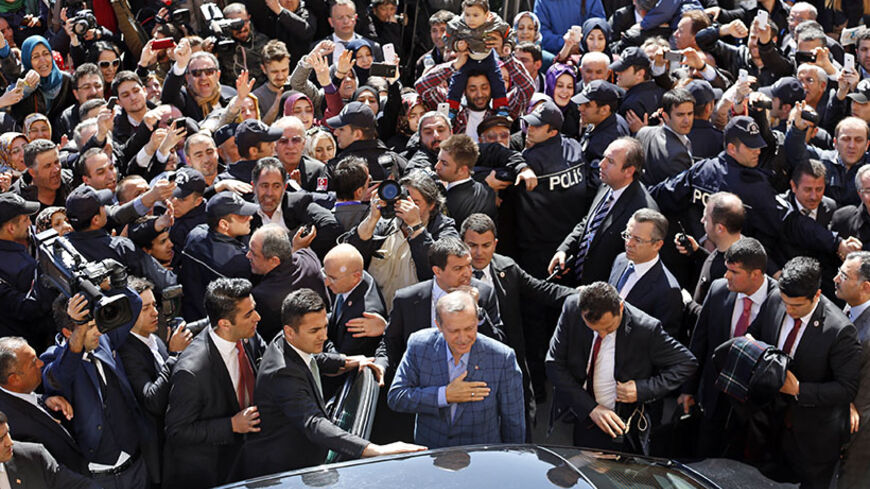 In my June 4 article for Al-Monitor, I reported a Turkish government decision to close down all police academies on the grounds they have come under the full control of the Islamist Gulenist organization. The higher echelons of the state — President Abdullah Gul, Prime Minister Recep Tayyip Erdogan, Chief of General Staff Necdet Ozel, National Intelligence Organization (MIT) chief Hakan Fidan as well as ministers and senior bureaucrats — all agreed on the threat the Gulenists pose. The government said the Gulenists had entrenched themselves within the state in a secret hierarchy of their own.

No objections came to the decision from the opposition parties either, for they had long claimed that a secret Gulenist structure existed within the intelligence services, the military, the judiciary and the police. The opposition had also maintained that some high-profile judicial cases in recent years had been fabricated by Gulenists and harshly criticized the ruling Justice and Development Party (AKP) on the issue.

The main opposition Republican People’s Party (CHP) had argued that a considerable amount of evidence presented in the Ergenekon coup case was fabricated by Gulenists. Similarly, the second-largest opposition force, the Nationalist Action Party (MHP), had argued that the digital evidence used against scores of soldiers in the Sledgehammer coup case was a Gulenist fabrication. (MHP parliament member Engin Alan, a retired three-star general, was convicted in the Sledgehammer case and remains behind bars.) The pro-Kurdish Peace and Democracy Party (BDP), for its part, had maintained that the massive case against the Kurdistan Communities Union (KCK) was also trumped up by Gulenists out of their enmity against Kurds. All three opposition parties were proved right to a large extent. Though the essence of the Ergenekon and Sledgehammer cases was justified, they eventually became devoid of meaningful content. The Turkish public today overwhelmingly believes that trumped-up evidence was planted in both cases.

And in a major development this week, the Constitutional Court ruled that the rights of Sledgehammer defendants were violated, meaning that more than 200 officers convicted in the case will now be retried. The defendants are likely to be released this week, pending a retrial. The court issued a similar judgment in the case of former police chief Hanefi Avci, sentenced to 15 years on highly controversial charges after publishing a scathing book about the Gulenists.

A series of judicial probes are currently under way against Gulenists entrenched in the police and judiciary. Last week, 11 senior police officers were arrested on the demand of Ankara prosecutors investigating the discovery of bugging devices in Erdogan’s office, car and family residence. The 11 suspects — rounded up in simultaneous raids in five cities — are all former bodyguards of Erdogan, including two former chiefs of the prime minister’s security detail. A 12th suspect who figured on the detention warrant turned out to have fled abroad after his recent resignation from the police.

The prosecution is said to have based the probe on charges of illegal organization and espionage. Using technical equipment, anti-terror experts and forensic police conducted extensive searches in the homes of the former bodyguards. A report on the bugging devices by the Prime Ministry Inspection Board was influential in opening the operation.

The suspects, who allegedly belong to the secret Gulenist organization within the state, had served five years as Erdogan’s bodyguards. Some of them are still in office in other positions in the police. Standing out among the suspects is Zeki Bulut, a former chief of Erdogan’s security detail and a fixture in the prime minister’s immediate entourage for five years. Bulut was allegedly the mastermind of all monitoring and wiretapping of Erdogan and his family.

Erdogan first spoke of the discovery of bugging devices in his office in a television program in December 2012. “A bugging device was discovered in my study, downstairs in my home. It was found and removed by competent units as they combed [the building]. But we are not done with it yet. We will now find out who planted it there. Unfortunately, such things happen despite all precautions. The phenomenon called the deep state, you know, they are not sitting with folded arms, they are at work. They have infiltrated the state,” Erdogan said at the time. He added he had instructed the Prime Ministry Inspection Board to look into the issue. Asked about who could have planted the bug, he said, “Only the closest people to you could do it.”

Following the arrest of the 11 suspects, I spoke with someone who was very close to Erdogan. That person said the bodyguards had been treated like family members before it was realized that the same men had orchestrated a ploy to monitor and wiretap all members of the Erdogan family 24 hours a day and archive the records. “We believed that a Muslim would never play tricks on a fellow Muslim. We thought that people who pray five times a day would be trustworthy. We saw those people as brothers, while they conspired to discredit Erdogan and his whole family and lock them up. We were all set up,” the source said.

Subsequently, a series of secretly recorded images and audiotapes of the Erdogan family hit the Internet during the four months ahead of the March 30 local elections. The tapes — both genuine and fake — included details about their private lives, beyond issues related to the Dec. 17 probe into corruption allegations.