Iran's supreme leader says US has given up on military attack

Supreme Leader Ayatollah Ali Khamenei has said that the United States will not take military action against Iran and expressed hope for the eventual success of the Arab Spring. 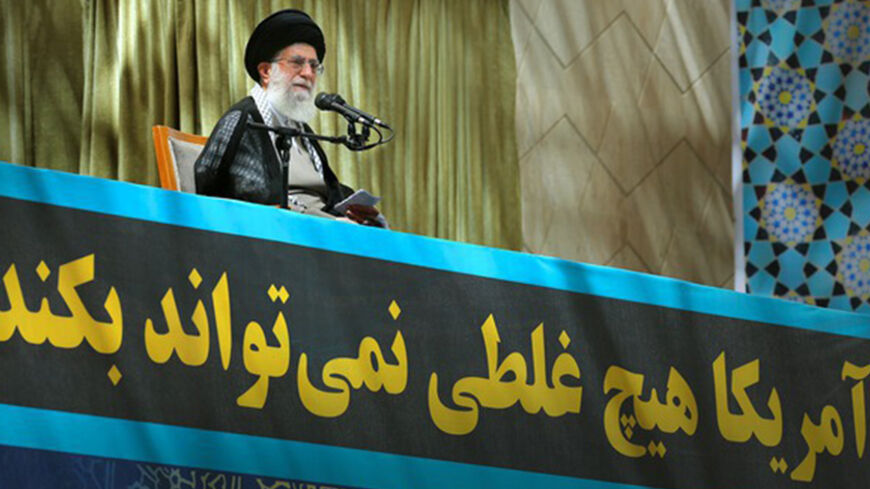 Iran’s Supreme Leader Ayatollah Ali Khamenei said that the United States has given up on making a military strike against Iran and will be pursuing other means to influence the country. He also said that despite the efforts of the West, the "Islamic Awakening" is not defeated. When protests began in the Middle East and North Africa, they were dubbed the Arab Spring. Many Iranian officials however, viewed them as a continuation of the 1979 Iranian revolution, thus giving them the name “Islamic Awakening.”

“A military attack from the viewpoint of the Americans is not a priority,” Ayatollah Khamenei said in a speech June 4, the 25th anniversary of the passing of former Supreme Leader Ayatollah Ruhollah Khomeini. “They have understood that in Afghanistan and Iraq, after a military invasion, they were harmed. Therefore, it can be said that they have given up on the military attack.”

He added the United States has “other ways, one of them is to advance their goals in their intended country by entrusting them to domestic agents in that country.”

Khamenei was also hopeful about the eventual outcome of protests that erupted in some Muslim countries beginning in 2011. “Perhaps Western intelligence organizations give reports that they were able to suppress the Islamic Awakening in our region,” he said. “This will be another one of our enemy’s strategic mistakes and incorrect analysis. It’s possible that in some parts of the world, the Islamic Awakening will be suppressed, but undoubtedly, it will not be uprooted and it will spread.”

Iran has had a mixed response to the various countries that experienced mass protests. It originally supported the Egyptian revolution and later the election of former President Mohammed Morsi. Major differences with Morsi, however, especially with respect to Syria and Palestine, prompted Tehran to adopt a neutral position when he was overthrown in a coup. With respect to Syria, Iran has supported President Bashar al-Assad and did not view the protests in that country as part of the Islamic Awakening.

Iran’s supreme leader also said that the United States has three different types of relationships in its foreign policy. There are countries that “listen to the commands” of the United States and have its full support. Rather than condemning them for breaking international norms, the United States justifies their actions. He said that these “dictatorships or reactionary governments” are usually described by the United States as merely “patriarchal.” While Khamenei did not specify to which countries he was referring to, a number of states in the Middle East fit this criteria.

The second type of relationship the United States forms is that with Europe. Khamenei said, “Europe is making a big strategic mistake by being at the service of America,” adding that while there are “mutual interests” between the United States and Europe, the United States “will stab them in the back when it has the chance.”

The third type of relationship the United States maintains is with those who will not give in to American pressure, according to Khamenei. He said that the United States has “no limit or boundary” in what it does to countries who “disobey.”