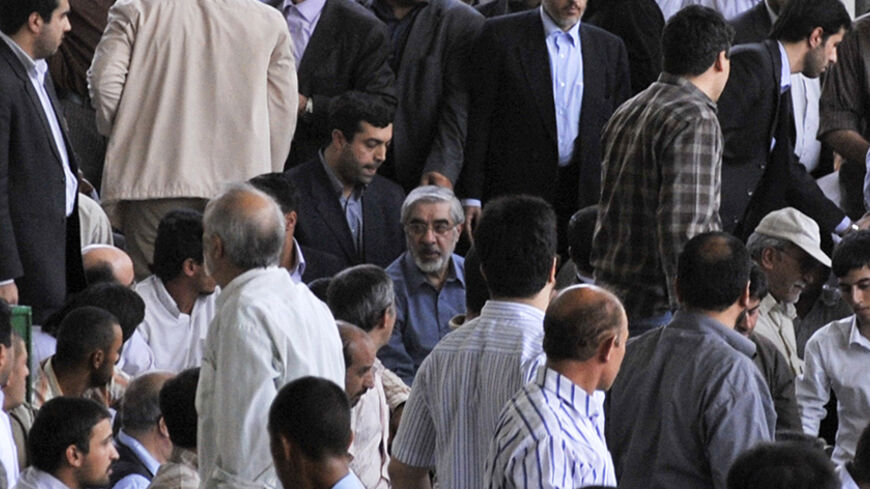 On June 17, the conservative parliamentarian and 11 others met with Ayatollah Khamenei. It was reported that Motahari asked the supreme leader if he would reconsider the ongoing house arrests of the Green Movement leaders, Mehdi Karroubi and Mir Hussein Mousavi and Mousavi's wife Zahra Rahnavard.

The three have been held under house arrest without charge since February 2011. After the contested 2009 elections, Reformist candidates Mousavi and Karroubi led the largest street protests seen in Iran since the 1979 revolution. The protests, which authorities later admitted caught them by surprise, led to a crackdown that resulted in dozens of deaths and hundreds of arrests.

“In my opinion and many other individuals', the continuation of the house arrests of Mousavi and Karroubi is not to the benefit of the country and the revolution, and is not necessary,” Motahari told Ayatollah Khamenei in the meeting. “If one of these two, in this condition, leave this world, the issue will be like a festering tumor for the Islamic Republic.” Both Mousavi and Karroubi have been hospitalized for chronic health conditions since their house arrests.

Motahari continued, “I request of your excellency to give orders to the judiciary to end this issue. If it’s necessary, sentence them along with the other individuals involved in this situation and put an end to this issue.” In previous statements, Karroubi had requested a public trial so that he could defend himself.

According to Motahari, Ayatollah Khamenei said, “I’ve talked about insight before and that we must not lose the path of the martyrs and the revolution. Their crimes are major and if it were up to Imam [former Supreme Leader Ayatollah Ruhollah Khomeini], he would confront them more severely. If they are sentenced, their sentence will be very heavy, and certainly you will not be happy about it. We are currently doing them a favor.”

In previous statements by other officials close to the supreme leader, similar sentiments have been expressed. However, this is possibly the first time that Ayatollah Khamenei has been quoted directly on the issue. Neither his office nor his website has issued a response to Motahari’s comments.

Motahari has been one of the most outspoken Iranian politicians on ending the house arrests. Because his father, Ayatollah Morteza Motahari, played a significant role in shaping the Islamic Republic and because he continues to advocate for conservative cultural policies (he was one of the parliamentarians who summoned the interior minister June 24 to address concerns about women in leggings), Motahari has been afforded more room to be critical of the highly sensitive issue of house arrests.

One of President Hassan Rouhani’s campaign promises was to end the house arrests. Since he came to office, some of his ministers have attempted to resolve the issue behind the scenes. But according to various statements, neither Mousavi nor Karroubi are willing to apologize, which appears to be one of the conditions for their release.