The Lebanese are concerned that their country may be the next target of the Islamic State of Iraq and al-Sham. 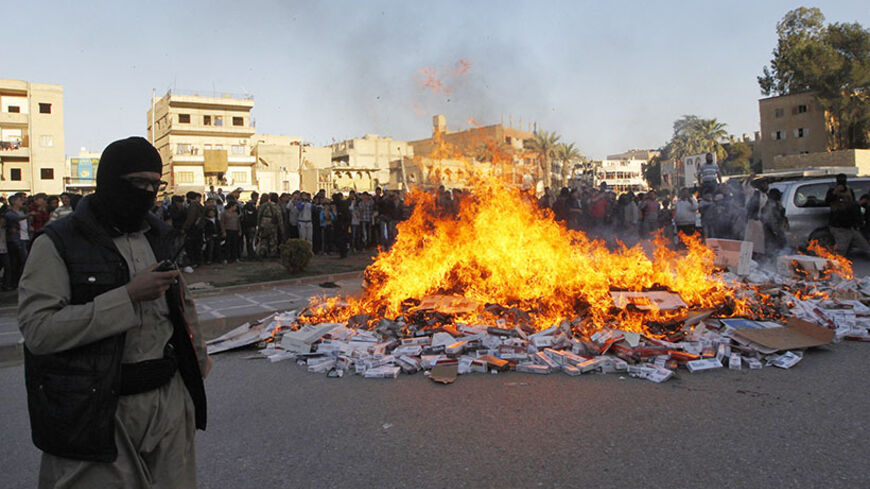 A fighter from the Islamic State in Iraq and al-Sham stands near burning confiscated cigarettes in Raqqa, April 2, 2014. - REUTERS

The Lebanese arena is plagued by concerns stemming from recent events in Iraq and the progress made by Islamic State of Iraq and al-Sham (ISIS) militants there. It is as if this was the event missing — a surprising synchronization between Iraqi events and a series of security incidents in Lebanon's border area — to transform concern into an obsession among state authorities and the various political forces.

Lebanon had been enjoying several weeks of cautious calm in terms of security. Hezbollah had taken control of and closed most of the Lebanese-Syrian border in the face of armed fundamentalists from the conflict in Syria, and the government carried out a series of successful security measures in Tripoli, the north and Arsal, in the Bekaa Valley. The news of ISIS in northwestern Iraq, however, came as a number of isolated security incidents took place in Lebanon.

On June 10, fundamentalist gunmen managed to sneak from Syria to Ras Baalbek, in the northeast, where they kidnapped eight people, including Lebanese and Syrians. Two days later, on June 12, a displaced Syrian was killed in a shooting targeting a refugee camp in Arsal, also in the northeast near the border with Syria. On June 13, violent clashes broke out between the Syrian army and fundamentalists in the barren lands of Syria’s Rankous region, near Lebanon's eastern border in the vicinity of al-Tufail. News agencies subsequently reported that 12 wounded fundamentalists had been taken to Arsal and admitted to the field hospital of a fundamentalist religious sheikh there. These scattered events, along with what is happening in Iraq, have raised questions of security among the Lebanese.

First, Lebanon is a target of the Sunni fundamentalist ISIS for ideological and doctrinal reasons. It should be noted that the “Sham” part of the organization’s name does not refer to the current, official Syria, but to the Arab Mashreq that also includes Lebanon. Added to this is ISIS’s sectarian struggle with Shiite Hezbollah. This was embodied in a series of bombings and suicide attacks specifically targeting Lebanese Shiite areas.

With the progress made by ISIS in Iraq, there are once again Lebanese fears of the possibility of ISIS sleeper cells in Lebanon or at least the possibility that its progress in Iraq will revive hopes and illusions among other fundamentalists on Lebanese territory to join their “brothers” in jihad, even if they do not have an organizational link to ISIS. With more than 1 million displaced Syrians now on Lebanese territory, one cannot be certain that there are no fundamentalists among them.

Lebanese politicians opposed to the Damascus regime refer to a second source of concern. Recognizing the danger of these Sunni fundamentalists, they raise the possibility that Syrian troops might deliberately take advantage of the “erasing” of the international border between Iraq and Syriaby ISIS and resort to doing the same along the Syrian-Lebanese border. They believe that the Syrian army might initially carry out limited incursions, but then expand or legitimize them under the pretext of pursuing ISIS militants on both sides of the border between Lebanon and Syria. They fear that Damascus would dare take such steps in eastern and northern Lebanon because of possible international, in particular Western, indifference in blessing any step that targets Sunni fundamentalist terrorism.

As for the third source of concern, it is more closely related to the so-called conspiracy theory and is exemplified by external or internal forces seeking to fabricate security incidents in specific areas and then blame ISIS, to create pressure at the military, security and political levels. According to them, this would fill the presidential vacancy that began on May 25 by pushing the political forces to agree to elect a new president in light of events and fear of chaos. This is what happened seven years ago in northern Lebanon, when clashes erupted between the Lebanese army and the Sunni fundamentalist organization Fatah al-Islam for unknown reasons, leading to pressures that significantly influenced the course of the presidential elections at the time.

Thus three factors lead us in Beirut to worry about Baghdad’s ISIS. Political and official sources confirmed to Al-Monitor that the ISIS threat is being seriously dealt with. The Lebanese armed forces have beefed up their presence along the border and inside the country, and Hezbollah has done the same at points it controls on the Lebanese-Syrian border.