Who's Behind Attempts to Spread Chaos in Lebanon?

According to a senior former Lebanese security official, jihadists are carrying out a series of attacks in Lebanon to draw the country into a civil war. 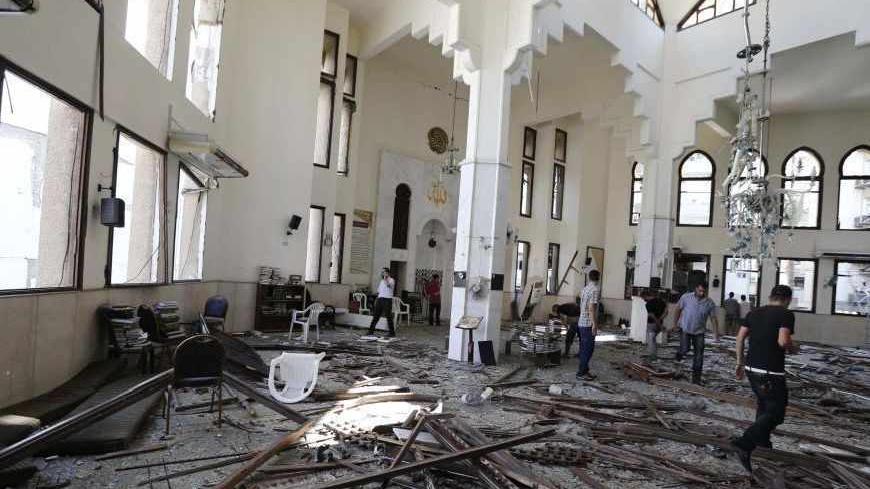 A former senior Lebanese security official had this to say about the accelerating security developments in Beirut: “If you lived in a house in the middle of a forest engulfed in a fire that was dramatically expanding as the result of a severe windstorm, and if your doors and windows were wide open before the fire began and if you were the head of the house and engaged in daily fights with your wife and children, would you surprised if a thief entered your home and stole some or your possessions or destroyed what remained of your furniture?”

This is the exact state Lebanon is in today, the former official told Al-Monitor. The house is Lebanon and the forest is the Middle East, which given its chaos is more like a jungle. Meanwhile, the raging fire is the series of internal wars that have been erupting in neighboring countries for a little more than two years. Our absent doors and windows are none other than the crises fomented by the Lebanese sectarian feudal system. The quarreling family is the skeleton that remains of the Lebanese state, where a vacuum controls almost everything.

In the midst of this scene, are we asking who is carrying out bombings or firing rockets?

The former official who still plays a significant role in the Lebanese political scene goes on to provide a precise reading of what is happening:

Two explosions hit Beirut's southern suburbs on July 9 and Aug. 15, and then two more blasts occurred in the northern Lebanese city of Tripoli on Friday, Aug. 23. The first two were targeting a Shiite area, while the latter targeted a Sunni city. One of the two blasts that hit the Shiite neighborhood was an attempt to target a partisan and Shiite religious site — the Sayyed Martyrs Collective, which is a Hezbollah center located in the Bir al-Abed neighborhood of the southern suburbs.

The blasts that struck Tripoli tried to target Sunni mosques, and occurred close to the home of a Sunni party official, retired Maj. Gen. Ashraf Rifi, who supports the team of former Prime Minister Saad Hariri. Thus, the juxtaposition and parallelism become complete. Whoever committed these acts wanted to give the impression of a reaction and a reaction, or a series of opposing strikes whose beginning is unknown. It was also necessary to emphasize that the end was unknown as well. The important thing was preparing the Lebanese scene for 'Iraqization' as soon as possible and through the harshest means.

Who is behind this series of attacks? The former official, who contributed in the past two weeks to efforts to restore communication between the Syrian authorities and UN Envoy Lakhdar Brahimi, said that answer is virtually obvious to the Lebanese security services. For these crimes all emerge from a single human and ideological environment. This environment is represented by fundamentalist Sunni jihadist movements, which extend between Lebanon and its surroundings, despite some diversity in group names and the banners they raise.

According to the former official, those who fired rockets from inside Lebanon targeting Lebanese sites — as well as those who fired rockets from Lebanon at Israel, as happened on Thursday, Aug. 22 — are members of the Palestinian Hamas Movement. Did they carry out these acts following official orders from the Hamas leadership, or were they carried out on behalf of another fundamentalist party? This is what the Lebanese security services are currently trying to determine. The former official revealed that official contacts were made in the past few days between Hamas leaders and some officials in Beirut. The head of Hamas' Political Bureau, Khaled Meshaal, even invited some Lebanese officials to meet with him to discuss developments regarding accusations that members of his movement were responsible for firing these rockets. However, the Lebanese officials declined to meet with Meshaal, given that he had requested that the meeting be held in the Qatari capital, Doha. The Lebanese had suggested that the meeting be held in Damascus, as had been the case during the years preceding Hamas' exit from Syria.

Regarding the recent explosions, the same former official noted that their source is also almost known. He added that the investigations regarding the Ruwais bombing on Aug. 15 revealed that the car that was used in the bombing had been stolen from a nearby neighborhood only 24 hours before the explosion. This means that the car was outfitted with explosives in a nearby area, to ensure that it could be quickly moved to the location of the explosion in a Shiite neighborhood in south Beirut. In contrast, the car that was loaded with huge quantities of explosives and was seized in the town of Naimeh, just south of Beirut, two days following the Ruwais explosion, allowing us to link the pieces of this puzzle together. According to the former official, Lebanese authorities have determined the identities of those suspected of loading this car with explosives. Some of them come from the area of Arsal, a town located along the Lebanese-Syrian border in the middle of the Bekaa valley in northeast Lebanon. This town became the focus of Syrian opposition militants backed by Sunni Lebanese and Syrian jihadists. Meanwhile, the town of Naimeh, where the explosives laden car was seized, is only 5 kilometers (3 miles) from the southern suburbs of Beirut. This means we can conclude that these same suspects had likely transported explosives from Arsal to the area surrounding the southern suburbs. They then stole a car on the night of Aug. 14, rigged it with explosives in Naimeh, and carried out the explosion in Bir al-Abed, only a few minutes’ drive from Naimeh.

The day following the Ruwais explosion, on Aug. 16, Hezbollah Secretary-General Hassan Nasrallah accused those he called takfiris of carrying out the attacks. This provided the opportunity to transfer the bombings from the Shiite neighborhood to the Sunni city of Tripoli, suggesting that the operation was a form of Shiite revenge, and perhaps launching sectarian strife resembling that of Iraq.

Who plotted such a hellish operation? According to the former official, the answer is combatants in Syria. The latter do not like the recent changes in the balance of power in Syria — neither on the ground, following the results of recent military confrontations, nor politically, following American-Russian progress toward convening the Geneva II conference. Those affected by this situation in Syria are ready to do anything to impede it and blow it up. And Beirut is the easiest channel for affecting any change in Damascus.