Iraqi refugees in despair in Jordan long for Saddam era

While life wasn't perfect under the rule of President Saddam Hussein, it was much better than today, according to Iraqi refugees in Jordan. 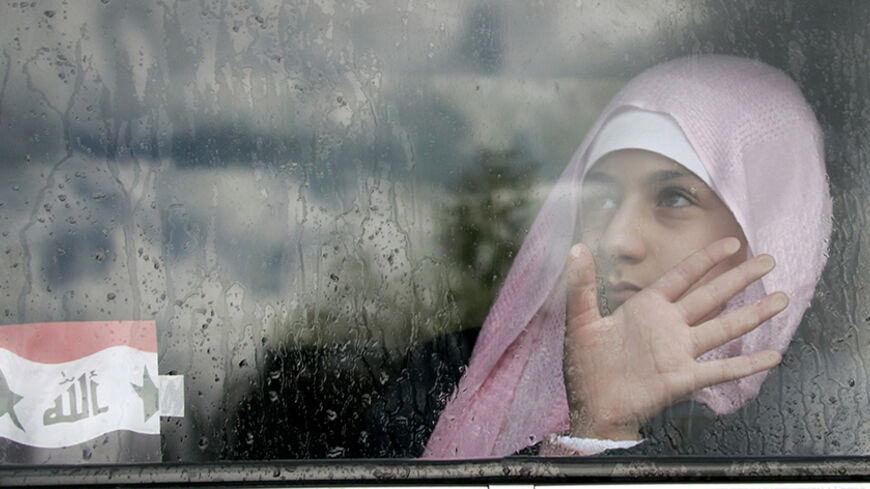 AMMAN, Jordan — In a small cafe in Amman, Syrian, Palestinian and Iraqi customers are smoking the hookah and drinking coffee. They enjoy a quiet evening watching the World Cup on a large TV screen. King Abdullah's portrait hangs on the wall next to the screen.

The Iraqi owner of the cafe, Farouq, moved from Baghdad to Amman in 2004 to escape the war in Iraq. He went back and forth several times in the first few years, until he realized that it was better for him to start a new life in Jordan, as he could not have a normal life in Iraq. Now he lives with his wife and two children in Amman.

"In Iraq, I could not start my own company, because I'm a Sunni. The Shiite government was working against me all the time. A bunch of corrupted people, that’s what they are,” Farouq told Al-Monitor on the condition that his last name not be revealed.

“And of course it was dangerous, too, with all the bombings," he said.

Like most Iraqis living in Jordan, Farouq opposed the US-British invasion in Iraq. When speaking with Iraqis in Amman a recurrent sentiment is that everything was better in the old days, when President Saddam Hussein was still in power. When there appeared to be no evidence for Saddam’s support to terrorists and weapons of mass destruction, Iraqis started to doubt the real intention for the invasion. Now, 11 years later, the conflict between Shiites and Sunnis is raging in Iraq and Syria.

“That the Islamic State of Iraq and al-Sham [ISIS] grew this big is not a surprise to me. Nouri al-Maliki's government has suppressed the Sunni population for years, and the current situation is a direct result of his policies. Before, we didn’t have a Sunni-Shiite conflict," Farouq told Al-Monitor, adding that he remains in contact with his friends and family in Iraq.

“They keep telling me that it’s not only ISIS who took over. Secular Baathists also joined the extremists, you know, as well as tribes. How else could ISIS have gained territory so fast?” he said.

Yet, Farouq admits that he is a little worried about ISIS, as the terrorist group wants to establish an Islamic caliphate stretching across Iraq and Syria and other parts of the Middle East. ISIS fighters do not believe in the colonial borders that were determined by the British and the French after the fall of the Ottoman Empire. People living under ISIS would live according to the strict rules of Sharia, as interpreted by the radical group.

"Who wants to live under those rules? Not me. It’s not a good way of living,'' he said while smoking the hookah.

Jordan continues to provide asylum to a large number of Syrians, Iraqis and other refugees, despite the substantial strain on the national system and infrastructure. In 2013, Jordan hosted nearly 30,000 Iraqi refugees, the majority of whom are from Baghdad. Although their numbers have changed somewhat since then, with some returning home and others moving to other countries, a sizable Iraqi community remains in Amman.

Firas, an Iraqi who also lives in the Jordanian capital, came back from a short holiday in Baghdad a week ago after five years of not visiting his family in Iraq. He said he no longer recognized his own city. Buildings have been destroyed, many people have left and people's mentality has changed.

"You can feel that the people are angry. They see that everything is safe in the Kurdish region [Iraqi Kurdistan], but not for them," he told Al-Monitor.

Firas also fled the war in 2004, and just like Farouq, he thinks that the current situation in Iraq is a logical result of years of suppression where basic human rights such as health care, justice and education were neglected.

“And now that ISIS is there it will become even worse. I don't have any faith in the future of my country, and I don’t think I will ever go back," he said.

He glorifies the days when he lived under Saddam's rule. According to Firas, it was not good, but at least it was better than what is going on now. Firas met Saddam a few times in one of his palaces, when he worked as an engineer for the former president, who was found guilty of crimes against humanity and sentenced to death by hanging in 2006.

“One day, I had to repair a lamp on Saddam’s balcony. I said that it was broken because a bird was living in it, and that it had to be replaced. Saddam said he didn’t want the bird to lose its house, so I was not allowed to hang another lamp."

Firas laughed and said, “Can you imagine that this was the same guy who made sure thousands of Iraqis didn’t have a home anymore?”

The United Nations has observed that the number of Iraqis seeking asylum in Jordan has significantly increased in June compared with previous months. Helene Daubelcour from UNHCR Jordan told Al-Monitor that 841 Iraqi individuals approached UNHCR in June compared to 493 in May and 590 in April.

“We have actually received very few Iraqis seeking asylum in Jordan [recently] because of ISIS-related developments. Most Iraqis actually flee generalized and sectarian violence occurring in Baghdad, as many as 40% or more," Daubelcour said.

ISIS is still gaining territory in western Iraq. On June 22, Jordan sent army units to the border area after the Iraqi army had lost control of a major border crossing to ISIS militants. Abdullah has warned of the growing threat posed by ISIS and called for a new inclusive government in neighboring Iraq.

“The crisis in Syria has shown us that transnational terrorists have no regard for borders. We face challenges when those terrorist organizations or those extremists return back to their host countries,” Abdullah said in Berlin, ahead of his meeting with German Chancellor Angela Merkel.

Farouq also thinks that Jordan sooner or later will be affected by the crisis in Iraq. When he is asked what kind of circumstances would make him return to his homeland, he smiled for the first time.

“I hope someone like Saddam will take over the country. Then we can defeat the extremists and rebuild Iraq again," he said. “And then I would definitely go back."