Is UNHCR in Jordan discriminating against Sudanese refugees?

Sudanese refugees in Jordan have been protesting what they see as the UNHCR discriminating between them and Syrian and Iraqi refugees. 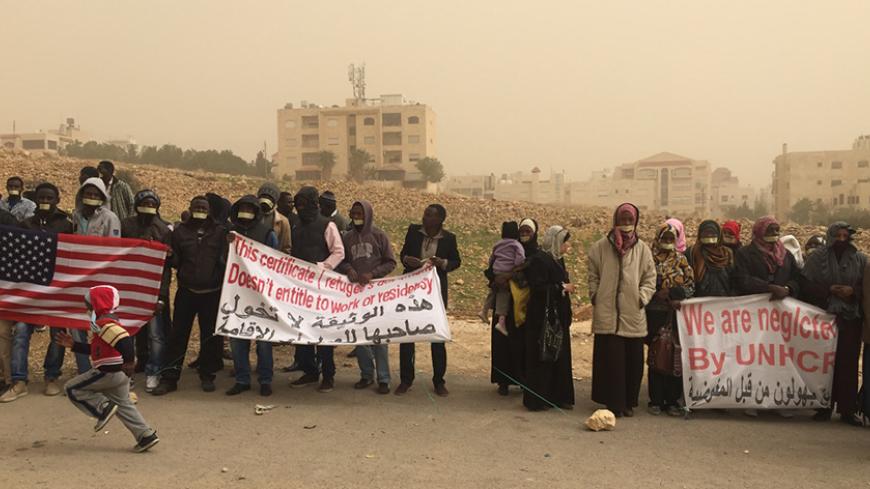 Sudanese refugees tape their mouths and hold signs during a protest outside of UNHCR offices in Amman, Nov. 24, 2015. - Adam Lucente

Since Nov. 4, around 200 Sudanese refugees have been protesting at the United Nations High Commissioner for Refugees (UNHCR) in Amman, Jordan. Having escaped the harrowing conflict in their homeland, these refugees are protesting a lack of employment and education rights, racial violence and perhaps most of all, allegedly less assistance than that provided to Syrian and Iraqi refugees by the UNHCR.

The protests have since become a daily occurrence. Protesters have set up 20 or so tents in the UNHCR’s parking lot, where they intend to stay until a solution is reached or they are forced to leave. On the other hand, the UNHCR's External Relations department believes it is doing all it can to help the Sudanese community.

The protesters make several claims against the UNHCR, including an alleged lack of significant resettlement. “People spend a long time — sometimes four to seven years — without resettlement,” Ali Yahya told Al-Monitor at a protest, removing the brown duct tape covering his mouth.

The demonstrators stood with their mouths taped shut. “At this protest we are silent. We have no voice,” said Nizar Idris, one of the organizers.

“We want to travel and leave. Jordan is dangerous for us,” said Idris, in a reference to recurring violent attacks against Sudanese in Amman. He spoke amid a display of American, British, German, Australian and other flags, hoisted by the protesters to show the countries they hope to travel to.

They further criticize an apparent lack of services from the UNHCR. “Only the disabled get services. The UN says, ‘You’re a strong guy; you need to work,’” Yahya added.

Another protester, Faisal Babaker, claims he went to the UNHCR to request financial help for a surgery. “They told me my situation was not deserving of help. But I’m a refugee; I can’t work. I lose hope,” he said.

Faisal is not sure what he can do aside from asking for assistance. “We can’t work, so how can we survive? We’re in a miserable situation,” he added. Many of Jordan’s refugees work illegally, having failed to obtain work permits as foreigners. Many Sudanese lack the legal refugee status needed to obtain such permits.

According to the protesters, Syrian and Iraqi refugees receive more and faster services from the UNHCR, a discrepancy they say constitutes racism. “Their interviews are processed within a few days. For us it’s sometimes one to two years,” said Yahya.

Banners held up at the protests reveal similar opinions. On Nov. 24, one tent had “No discrimination between refugees” written on it.

The protesters clearly view the UNHCR as their best chance to get help, but many of their grievances stem from their position in Jordanian society. The protesters uniformly complain of racism directed at them in public. “I’ve seen a lot of racism. They call us pigs, dogs and not human,” Saleh Babaker told Al-Monitor at one of the protests. Saleh works illegally, mostly at cleaning jobs in Amman.

Last year, reports by Al Jazeera, Vice News and other organizations emerged about Sudanese refugees being attacked in Amman’s streets. The protesters say this violence is ongoing. “People tried to kidnap me for trafficking,” said Fatma Abdullah outside the UNHCR. She said she managed to escape by running to the main street. “My sisters have decided not to leave the house” over fears of violence, she added.

The protesters further decry their inability to legally work or study in Jordan, results of their lack of refugee status and inability to afford both legal residency and private schooling. “I work at night so the government can’t catch me,” Yahya said. “All of us work illegally.”

Because the process of getting refugee status takes so long and residency can cost up to 180 Jordanian dinars (over $250) per year, many Sudanese children cannot go to public schools, and private schools can cost over 1,000 dinars (around $1,400) a year.

Amel Abdallah, a Sudanese volunteer teacher, said, “I teach them Arabic. They have no other education.”

Daubelcour said that assistance is provided “based on vulnerability, not pressure,” and claimed that Sudanese refugees are in fact receiving assistance when necessary. “The average amount of cash assistance a Sudanese family receives is 214 dinars a month [around $300]. The average Syrian family receives 100-120 dinars [$140-$170],” she said when asked if the UNHCR views the Sudanese as less of a priority.

The UNHCR determines a refugee vulnerable enough for resettlement based on a “combination of factors, such as medical situations that require long-term treatment that is not available [in the host country], protection concerns and lack of integration prospects,” said Daubelcour, adding that whether they are granted asylum after this is up to the host country.

With understandably stringent criteria for resettlement, it’s no surprise that few refugees meet them. At the same time, their inability to work and security concerns warrant asking if more Sudanese refugees should be resettled.

The UNHCR considers itself strained by a lack of resources. “If some money could be made mandatory, that would allow us to provide more dignity,” Daubelcour said.

Finally, the large number of nongovernmental organizations solely dedicated to Iraqi and Syrian refugees may explain the discrimination perceived by the Sudanese. “For Syrians and Iraqis, there is a wider network of charities,” said Daubelcour.

Indeed, numerous NGOs in Amman seem focused on the Syrian refugee crisis. For example, the Jordan page on the Mercy Corps website mentions their work with Syrian refugees, but not others. The same is true for Save the Children.

At the same time, some organizations such as Caritas Jordan have programs for Sudanese and other urban refugees. The vastly higher number of Syrian refugees attracts them more attention but also may contribute to feelings of neglect in the Sudanese community.

Sudanese refugees have mostly come to Amman within the past two years from the country’s conflict-plagued Darfur region. According to the UNHCR’s October 2015 Jordan fact sheet, there are nearly 3,500 Sudanese refugees in Jordan, compared to over 600,000 Syrians and over 50,000 Iraqis. The Sudanese mostly live in working class neighborhoods downtown and in east Amman. They have no camps such as Zaatari and others for Syrian refugees, meaning they are predominantly urban refugees.

Sudanese refugees feel unable to better their situation, while the UNHCR believes it is doing what it can. Any major resettlement increase in the near future is unlikely, protesters are growing impatient, police are monitoring the protests and Amman’s winter days are getting shorter. The situation in Amman’s unofficial, makeshift camp of Sudanese refugees outside UNHCR headquarters seems bound to continue.