Russia would like to see the government of Prime Minister Nouri al-Maliki eradicate Islamist groups such as the Islamic State of Iraq and al-Sham (ISIS) to minimize terror threats on its own territory. 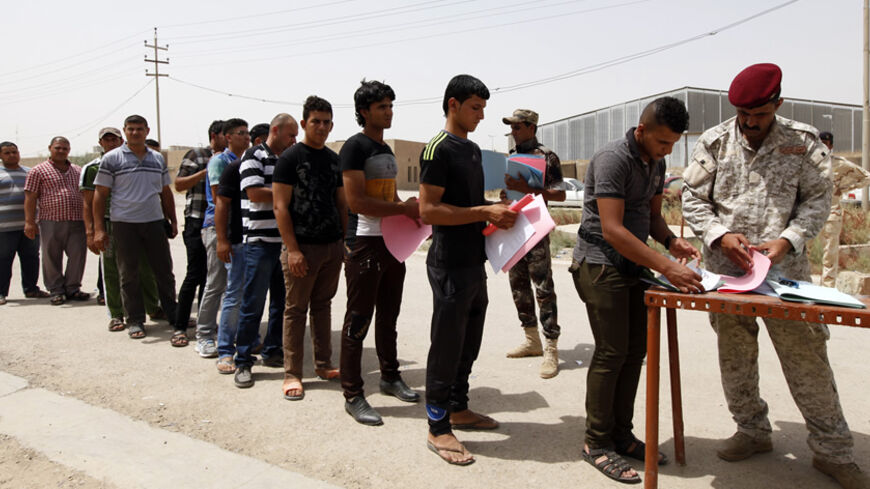 Volunteers stand in line to join the Iraqi army to fight the predominantly Sunni militants from the radical Islamic State of Iraq and al-Sham, June 20, 2014. - REUTERS/Ahmed Saad

The Islamists’ blitzkrieg in northern Iraq appears to have caught the international community by surprise. However, one should neither attribute this success to one single group, namely the Islamic State of Iraq and al-Sham (ISIS), nor consider it totally unexpected. ISIS has long created a support base for itself in Mosul, and it was not the only organization — and perhaps not even the main one — to take over the city at lightning speed. Among six major groups, the Mujahideen Army especially stands out, and there is talk of the important role played by the Naqshbandiya group that has great influence among the Kurds and Turkmen. I doubt, however, that Baathists and former Iraqi military personnel played an equally significant role in the capture of part of the country by the terrorists.

Of course, it is not uncommon to find a "marriage of convenience" in politics. Yet, the civilizational positions of radical Islamic terrorists — who are "frozen in time" and have surpassed al-Qaeda in cruelty with their reprisals against those who do not accept their values — are irreconcilable with those of the secular nationalists, even if they have experienced some sort of re-Islamization in the opposition underground. And it is very convenient to blame it all on the Iraqi Baathists, including the Baathist regime of Syrian President Bashar al-Assad, whom the Syrian opposition accused of supporting Islamic terrorists even before ISIS’ offensive. Regardless, a religious platform such as the Naqshbandiya, with its Sufi undertones, can hardly be acceptable for ISIS extremists. If they are at war with Jabhat al-Nusra, then they would be at each other’s throats even more with the Naqshbandis.

US President Barack Obama's decision to send 300 military advisers to Iraq and consider the possible use of air and rocket strikes on ISIS positions has confirmed the fact that in the mind of a significant part of the political establishment in Moscow, military force remains — perhaps to an even greater extent than before — an instrument of policymaking. Analysts are not surprised that along with opponents and skeptics, many in the United States appeared to support the direct involvement of US troops in the hostilities now ongoing in Iraq. They paid attention, in particular, to the words of the chairman of the Senate Select Committee on Intelligence, Sen. Dianne Feinstein, who declared, "I think most important is that we take direct action now against ISIS."

In Moscow, what is happening is perceived as a repeat of the debates that took place in the United States before the invasion of Iraq in 2003. It has been suggested that the United States may possibly be drawn into the civil war in Iraq and the Levant, which would exacerbate the situation in the region. No one, however, is gloating over the failure that befell the large-scale operation — extremely costly in blood and treasure — that changed the regime and transformed the sociopolitical structure of one of the key countries in the Middle East. Moreover, if — with the active help of the Americans — the government in Baghdad succeeds in eradicating ISIS, this will serve Russia’s interests — first, because it would reduce the direct threat to its security posed by the spread of terrorism in the Middle East, and second, it would ease the military pressure on Syria, creating the preconditions for the resumption of the peace process.

The roots of what is exacerbating the problem do not lie in the mistakes of Iraqi Prime Minister Nouri al-Maliki, whom both Washington and Tehran — somewhat paradoxically — have always supported, but in the errors of the previous US administration. Nowadays, hardly anyone doubts that the three major blunders committed by the Americans in Iraq were the ban on the Baath Party, the dissolution of the army and the elimination of the state bureaucratic apparatus. It is clear why this was done: There were fears that these structures would be incapable of transformation and that, moreover, had they been maintained, they could exact revenge in the future. However, the main effective state institutions that were eliminated were the mainstay of the secular nationalist regime — despite all the hideousness of Saddam Hussein’s brutal dictatorship, who brought grief both to a huge number of Iraqi citizens as well as to the citizens of neighboring Iran and Kuwait. As a result, a power vacuum spread in Iraq (not to mention the explosive mass of disgruntled highly skilled specialists) that the new rulers have failed to fill.

I believe that an equally serious mistake by the United States, however, was its reliance on religious identity. The George W. Bush administration started to implement a "Shiite project." Undoubtedly, under the former regime, the Shiites had been a discriminated-against "minority" that was in dire need of help. Still, this was not carried out by promoting a sort of national consensus, but by relying on the Shiite religious parties, namely the Islamic Dawa Party and the Supreme Council for the Islamic Revolution in Iraq. In essence, the "Shiite project" was a religious one that could not but provoke a sharp rise in hostility among the different sects in Islam. Finally, the no-less-fair rehabilitation of the Kurds led to the creation of a Kurdish quasi-state in the country. As a result, social fragmentation increased, while the task of nation-building and the creation of a full-fledged nation-state in Iraq began to look quite illusory. By letting the sectarian genie out of the bottle, the United States doomed the country to internecine strife.

If today the US administration again instigates regime change in Iraq from the outside — now pushing out Maliki himself, who is certainly far from blameless — will this not lead only to renewed destabilization, as has happened elsewhere in the region?

Some Russian experts believe that, in a further and even sharper aggravation of the crisis of the Iraqi nation-state, the Iraqi Kurds could move toward a declaration of independence. Although this scenario is a nightmare for Turkey, it cannot be denied that the creation of a buffer state in the north of Iraq may serve Turkish interests, provided that it is loyal to Ankara and will not spread its influence on its brethren on the other side of the border.

There is no doubt that the success of the militants in Iraq increases the terrorist threat to Russia and reinforces its concern over the future, when "the boys come home." This is how Matthew Levitt put it in his American Foreign Policy Council article "Regional Implications of the War in Syria," drawing a parallel between the current situation with foreign fighters and the year 1993, when a report by the Bureau of Intelligence and Research at the US State Department described a similar threat emanating from the former mujahideen who had fought in Afghanistan.

Thus, Moscow's interest in developing cooperation with those countries that have experience in combating terrorism is growing. Among them there is also Israel, with whom relations have recently been on the upswing, despite serious disagreements on the Palestinian issue. It is appropriate to recall that, during the vote on the anti-Russian resolution on Crimea at the UN General Assembly on March 26, Israel was among those who did not participate in the vote, though this was explained as the result of a strike at the Ministry of Foreign Affairs. Some Israeli political scientists have even begun praising Moscow for its Syria policy. Avigdor Eskin writes in the Russian newspaper Izvestia June 18: "The accession of relative calm in Syria and the strategic convergence with Egypt can be considered two specific successes for Moscow."

I do not wish to make predictions, but I would like to hope that the US military aid to Iraq will contribute to a crushing blow to the most brutal and bloody terrorists. Still, no one can calculate today the possible costs of even a limited US military return to Iraq. Anthony Cordesman, as one of the top experts on the region, urges the United States to draw hard lessons from the wars in Iraq and Afghanistan: "Never fall in love with the mission."