With photos of women in leggings as evidence, the Iranian Parliament has taken Interior Minister Abdolreza Rahmani Fazli to task for failing to enforce Islamic dress codes. 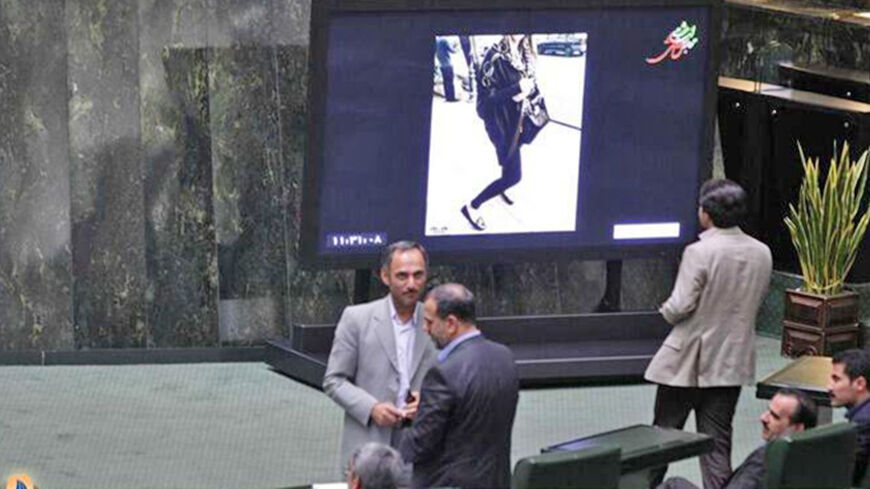 Iranian Interior Minister Abdolreza Rahmani Fazli was summoned to parliament to answer questions about why more measures have not been taken to prevent women from wearing leggings in public. In the open session, members of parliament were shown pictures of women in leggings, called “support” in Iran. The elastic, skin-tight garments, typically worn by women who loosely observe Iran’s modesty and hijab laws, have irked some religious conservatives.

Rahmani Fazli said that the Interior Ministry is only one of the agencies responsible for the implementation of the modesty and hijab law, adding, “All of the executive agencies have specified responsibilities with respect to modesty and hijab," and "In these instructions, many problems can be seen.”

“I have to be answerable for the last six months, not the last eight years since this law was passed,” Rahmani Fazli continued. He said that his ministry has been “at least five times” more active in the implementation of this law than the previous one. He added, “We have to accept that solving this issue is not possible in the short term.”

Rahmani Fazli also said that money had been allocated in this year’s budget for the modesty and hijab law, to create nongovernmental organizations to promote the hijab and committees to create jobs in women’s clothing. He added that the budget was allocated for the supervision of clothing in department stores, airports and student dormitories.

Motahhari accused the administration of President Hassan Rouhani of continuing the policies of former President Mahmoud Ahmadinejad with respect to the hijab, saying, “Ahmadinejad and [former chief of staff Esfandiar Rahim] Mashaei believed that the administration had no responsibility for the law of Islamic dress and that only cultural work needs to be done, which is fallacious reasoning,” he said.

According to Motahhari, Ahmadinejad said on the issue of hijab, “Let the people be happy.” In various interviews, Ahmadinejad did promote the idea that it was not the government’s job to interfere in people’s social lives, particularly if a woman and man are seeing walking together in public. However, hijab laws were enforced by the police, which answers to the supreme leader, throughout his entire administration.

“We did not expect the previous administration to monitor dress and modesty,” Motahhari said. “But we do expect it of this new administration.” He continued, “It is here that that an Islamic government has a responsibility to take action and not allow an environment against norms to be created.”

Rahmani Fazli, who received a “yellow card” from parliament for giving unsatisfactory answers, said that Rouhani and his administration have the same sensitivity to this issue as Motahhari. He cited a poll from the Basij organization that said that 95% of women believe in Iran’s hijab laws and that a few pictures of women in leggings do not prove that the administration has been lax on this issue.