The Kurdish movement, uneasy with the stalling of the peace process, may have a card to play in the August presidential elections. 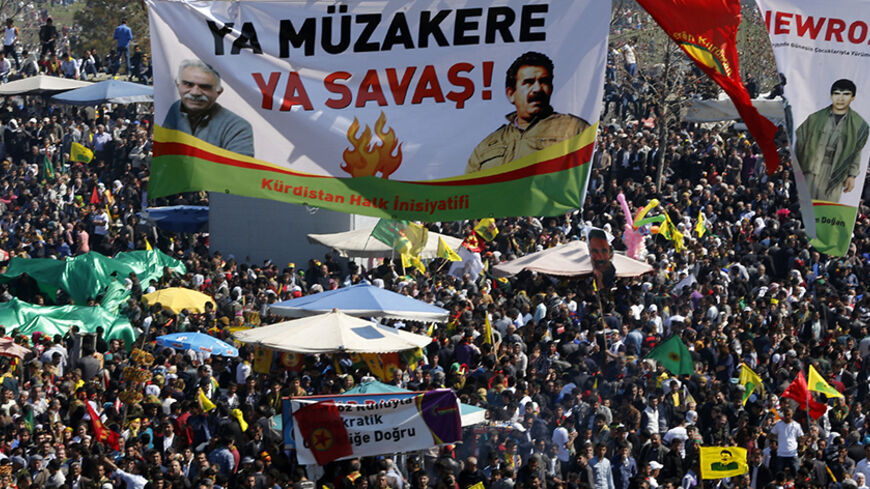 Barring extraordinary developments in Turkey, we can safely predict that Prime Minister Recep Tayyip Erdogan will be the Justice and Development Party (AKP) candidate in the August presidential elections. While Erdogan of course wants to win in the first round of voting, to avoid an uncertain runoff, this might not be easy for him to accomplish. Even if one takes into consideration absentee ballots from abroad and votes from two small conservative nationalist parties likely to support Erdogan, he is still unlikely to receive more than 50% of the vote in the first round. Thus, the Kurdish factor enters the equation.

If Erdogan wants to be elected in the first round, he needs Kurdish votes. Such votes, however, do not come for free. The kind of victory Erdogan wants requires that he meet some of the Kurds' demands and provide convincing promises for others yet to come. This cannot be disputed. In the first round of balloting, Kurds hold the key for Erdogan. If the election goes to a second round, the Kurds' cards will not be as strong, because Erdogan will have the votes of the National Action Party's conservative Sunni base, making his need for Kurdish votes less desperate.

Kurds are not only the key to Erdogan's victory, but they are also in a position of strength, free to play their aces as they wish. Why? Just like other parties, for the candidates of the Kurdish movement to win parliament seats or mayoral posts in local and general elections, they need an atmosphere of calm and stability. But in the presidential elections, the Kurds don’t need to worry about preserving calm and stability, because the Kurdish candidate who runs in the first round has no chance of winning. To the contrary, it is Erdogan who needs calm and stability for the campaign and election process.

The Kurdish movement, which is perfectly aware of these realities, recently ramped up its pressure on the AKP government and its activism to best use the window of opportunity offered by the presidential election. In this context, two major developments happened in the Kurdish-dominated southeast of the country.

The first was reports of increasing enrollment in the armed wing of the Kurdistan Workers Party (PKK). There is no firm data on this phenomenon available, but it is worth remembering that the PKK has no human resources problems and whenever it wants to step up the pressure on the government, it is capable of easily increasing recruitment.

A May 28 statement by Ozgur Turkdogan, the chairman of the Human Rights Association, offers a clue. Turkdogan said that in the last two years, between 2,000 and 3,000 young people, mostly university students, have “gone up the mountain,” which in political jargon means joining the PKK's military wing.

The second development of note in recent months was widespread activity, including violence, by Kurdish militants in the southeast. They blocked roads and raided and destroyed construction sites to sabotage the government's building of scores of fortified military outposts.

The Kurdish movement says the government’s construction of new and modern military bases in the Kurdish regions goes against the spirit of the peace process and is actually preparation for war. In response, government spokesmen say the presence of so many armed PKK militants in the mountains justifies increasing the military's presence there. If the peace process had been moving along dynamically, perhaps the PKK's withdrawal from Turkey would have been completed by now and there would have been no need to build these outposts.

Two people were killed when the Turkish military intervened with road-blocking by Kurdish militants protesting military outpost construction at Lice-Diyarbakir on June 7. In Kurdish provinces and Istanbul's Kurdish-populated districts, there were widespread protests over the killings and clashes re-erupted between security forces and demonstrators.

During the June 8 Diyarbakir funeral of the men killed at Lice, one Kurdish young man who split off the procession entered a Turkish air force base and lowered the Turkish flag, sparking intense nationalist protests in the west of the country. All these negative developments show how fragile the non-hostility between the government forces and the PKK has become.

This fragility is the result of the loss of the dynamism generated by efforts to resolve the Kurdish issue, revitalized in the final months of 2012.

The last concrete and positive major step in this process was the March 21, 2013, call by PKK founder Abdullah Ocalan, now serving a life sentence in prison, for armed PKK elements to leave the country. Erdogan did not take a single worthwhile confidence-building measure for 15 months because of political calculations. He is personally responsible for the peace process stagnating and stalling at a stage of non-hostility.

In fact, today’s status of non-hostility is the optimal choice for Erdogan, with the lowest possible cost for two reasons: First, it prevents the AKP from losing votes to the nationalist opposition, should there be clashes in the southeast and soldiers are killed. Second, it rules out losing part of the AKP’s nationalist voters if inevitable rights granted to Kurds are perceived as a concession to the PKK.

Beyond these realpolitik calculations, non-hostility is the prerequisite for advancing the peace process. It has to be maintained at all costs. But how? If the peace process is left to stagnate in Turkey, the democracy deficit continues to widen and authoritarian governance becomes the norm, how will non-hostility be preserved? This is the biggest impasse of the Erdogan government.

Erdogan’s worst misjudgment is to think that he could forever maintain the non-hostility status by engaging Ocalan and reaching an agreement with him. Ocalan, hailed by the Kurdish movement as the leader of the Kurdish people, has unmatchable influence on the PKK and its base. Nevertheless, in an environment in which the communal demands of the Kurds are not met, Ocalan cannot forever rely on his influence.

Official and unofficial spokesmen for Erdogan have been praising Ocalan in recent months. For example, take the June 7 words of Yalcin Akdogan, Erdogan's favored chief adviser: “I think Ocalan reads the process more correctly than others [Kurdish politicians and militia leaders]. His messages reflect a much more sensitive concern for the future of the process.” That same evening, Akdogan’s remarks were published in Milliyet, where we read the report from Lice of the killings of two Kurds.

On June 8, a delegation of the People's Democracy Party (HDP), which has become a successor to the Kurdish Peace and Democracy Party, was supposed to go to Imrali to meet Ocalan and bring a message from him. That same day, Duran Kalkan, a member of the Executive Committee of the Kurdistan Communities Union (KCK), the Kurdish movement’s highest (illegal) political body, spoke of the Lice incidents. He said, "It is because of these resistance actions that the AKP government had to plead with our leader [Ocalan] and our people.” The KCK issued a call to the people to step up the “resistance struggle” and to the Kurdish youth to "come up the mountain."

In his message sent with a three-person HDP delegation on June 9, Ocalan said, “The parties must absolutely respect a meaningful status of non-hostility.”

Akdogan, when asked by Milliyet whether the “votes of the Kurdish constituency are critical for the first-round election of the president,” opted for a noncommittal response: “The votes of all are critically important.” To get a proper response to this question, we have to wait for the HDP to decide on its own candidate. If the HDP comes out with a not-so-strong one, that would mean indirect support for Erdogan, whose chances of winning in the first round would improve. The other option is for the Kurdish movement to boycott the elections. That, too, in the end, would be supporting Erdogan.

This article has been updated since its original publication.