Egyptian President-elect Abdel Fattah al-Sisi has repeatedly addressed the need to raise living conditions for Egypt’s poor, and they expect him to live up to his words. 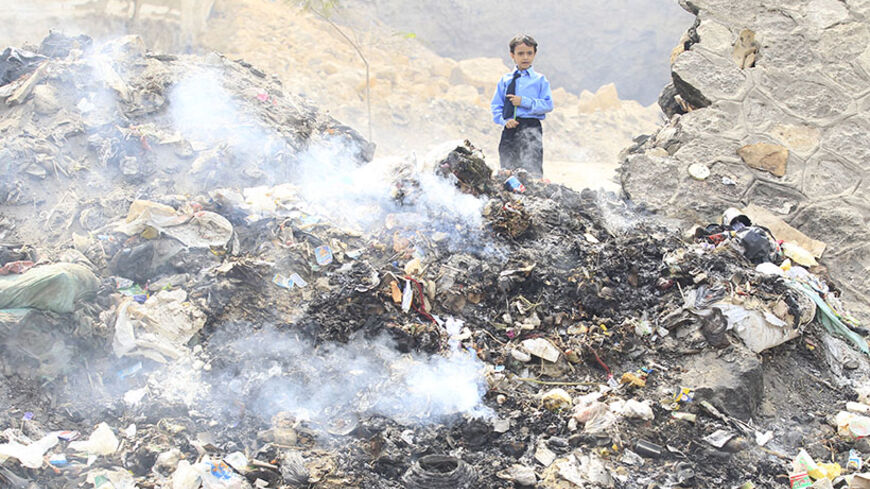 A child living in the shanty area makes his way home from school in Cairo, Oct. 4, 2012. - REUTERS/Mohamed Abd El Ghany

CAIRO — The spotlight is on Abdel Fattah al-Sisi after his landslide victory in last week's presidential elections. Despite a low voter turnout, the Sisi campaign did manage to win the support of certain target groups including rural tribes — as Al-Monitor reported last week — and some of the most impoverished in its cities. Now, many of those who gave their support to Sisi want something in return.

For the families who were forcibly evicted from their homes in Ezbet El-Nakhl — a maze of informal housing settlement that stood on the edge of northern Cairo until Feb. 18 — Sisi represents hope, but he has yet to deliver. However, statements by the president-elect himself suggest ordinary Egyptians, and particularly citizens living below the poverty line, could be about to face hard times.

Al-Monitor first met the families outside the Journalists' Syndicate, a 10-minute walk from Tahrir Square in the smoggy heart of Cairo. Horreya El-Gida'an (Freedom for the Brave), a relatively new coalition of January 25 Revolution activist groups, lawyers and rights campaigners was holding a news conference against the protest law on the steps outside.

"Hey foreigner, is this a Brotherhood protest?" half-shouted teenager Walaa, after picking us out of the crowd.

I tell them it is a Jan. 25 protest, not the Muslim Brotherhood. "Who are they? Are they with Sisi?" a group of older women ask, carrying babies. They tell their stories, about the evictions, sleeping on the streets and what they think will help their case.

"We don't care about the protests, we are with Sisi," Walaa said, pulling out a crumpled poster of Sisi from her bag. She introduced me to her father, Zaki. In the background we hear the old chants against the Supreme Council of the Armed Forces: "Down, down with military rule!" What the Egyptian political journalists and analysts and poll-watchers talk about seems momentarily irrelevant. The march suddenly leaves, the families disappear.

Sisi's support from poor and low-income Egyptians — people the president-elect has often appealed to or aimed his rhetoric at during months of unrest, hardship and campaigning — may be less absolute. Reuters reported this week that Sisi's "tough love" message may have alienated voters and one-time supporters in working class areas. But what about those who do not work, people living well below the poverty line?

Contrary to expectations, the jury may still be out.

Al-Monitor met the families outside Abdeen presidential palace, in the heady days before the elections. Zaki and his family were sleeping rough here in a small, haphazard sit-in outside the Cairo governorate building.

Zaki began by remembering his home.

"We had electricity, clean water, sewage, everything; it was like a regular shaabi [popular] neighborhood."

"We were living in huts under the bridge. They demolished the huts because they want to build the [El-Marg] bridge, but they haven't resettled us or given us somewhere else to stay."

An Amnesty International report said families were "reportedly given no warning, and most were provided with no alternative housing." Eyewitnesses reported, "Security forces fired live ammunition into the air to scare the residents who tried to object."

"If you compare this with international laws, this is forced eviction," said Yahia Shawkat, housing rights officer at the Egyptian Initiative for Personal Rights (EIPR).

The majority of families have been rehoused — Amnesty International said around 400 were initially left homeless from a total 1,200 evicted — but between 25 and 40 were left without roofs over their heads. Zaki's family started sleeping on the streets, moving between the bridge — their darkly ironic shelter — and places around Cairo where they felt they would be able to get their voices heard. Lawyers working on the case told Al-Monitor they have no fixed abode, after police forced the families to stay away from the bridge area — a second forced eviction. These are the people Sisi has promised to help once he was sworn in as president. "Egyptians deserve to lead a life of dignity, security and freedom," he said during his resignation announcement. "They deserve to have a job, food, education, medical treatment and affordable homes."

However, a series of statements, interviews and leaks suggest austerity and harsh economics could define Egypt's immediate future.

In interviews, Sisi has suggested measured reforms to the subsidy system, while appealing to the country's workforce to batten down for the greater good. He has also turned to social housing, as suggested in his resignation speech, as a campaign sweetener.

Shawkat says it is not enough.

"In a lot of the lingo they keep going between low- and middle-income families," he explained. "This is definitely not a scheme for the poor." An April EIPR report also stated that housing designed for "low- to middle-income families" was actually out of reach for 50% of low-income Egyptian families due to eligibility regulations. Al-Monitor also reported that the housing project will largely be beyond the affordability of the poor. "A lot of the building is simply done for investment, rather than for any need — whether for the poor or not."

Back in Abdeen, Zaki believes this is a question of their voice not being heard.

"Our problem could be solved with a phone call, but no one has moved to solve it yet. They haven't heard our voice. … [It] hasn't reached high enough yet."

Another father, Ahmed, is more critical of the situation. "This is Egypt … the weak get walked over," he said.

"We filed petitions with every possible governmental administration — the Prime Ministry, the presidency, the governor. Any government office you can imagine, we've filed a petition with." And there has been no response? "If we'd had a response, we wouldn't be sleeping here, would we?" He does not mention Sisi, but does not criticize him, either.

Meanwhile, Zaki said he still supports the man he affectionately calls the "field marshal.” Zaki got everyone to sign the petition mandating Sisi to run for the presidency in April. It was not a democratic thumbs-up from Ezbet El-Nakhl's homeless families, but another attempt to get noticed, to be heard.

Zaki is tentative about whether Sisi will help. "This is something we can't say because it's in the future. We will wait until he's responsible — because until now he hasn't been."

"After that, we'll judge him."

by Murielle KASPRZAK and Joseph SCHMID | AFP | May 26, 2022
END_OF_DOCUMENT_TOKEN_TO_BE_REPLACED