Egyptian President Abdel Fattah al-Sisi's comments about youth obesity and a potato shortage at a recent youth conference have unleashed a wave of sarcasm on social media, giving disaffected Egyptians an opportunity to vent their frustration with the rising cost of living. 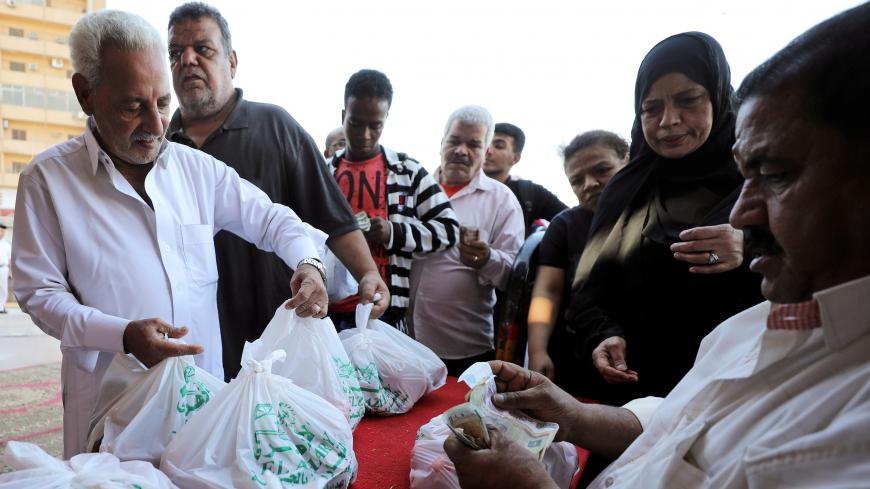 The World Youth Forum, held in the Red Sea resort of Sharm al-Sheikh on Nov. 3-6, was meant to engage young people and polish Egypt's tainted image as a heavy-handed police state. But President Abdel Fattah al-Sisi's attempts to downplay a recent potato shortage and his comments on widespread obesity among Egypt's youth did not go down too well with his audience. The satirical online response from internet users to his statements signals Egyptians' growing frustration with the steadily increasing prices, part of austerity measures introduced by the government two years ago "to rebuild the ailing economy." The mocking comments on Facebook and Twitter are reminiscent of the humor unleashed by young activists to defy the Hosni Mubarak regime during the uprising in January 2011.

Addressing a session on "Building Future Leaders," Sisi urged young Egyptians to be more physically active, suggesting that university students should shed half their weight in order to be more productive. "Being fit creates a good first impression," he advised. "It is clear that college students are not exercising much as many of the youths depicted in the documentaries shown here are overweight."

Turning to Rasha Ragheb, the director of the National Training Academy where promising young men and women are being groomed for future leadership positions in the government under the so-called Presidential Leadership Program, Sisi suggested that being in good shape should be one of the criteria in choosing candidates for the program. He also made light of the potato shortage that has angered Egyptians in recent weeks. "Do you want to build your country and become a worthy state or are you going to look for potatoes?" Sisi asked sarcastically.

His comments provoked an outpouring of counter-sarcasm from young Egyptians on social media. "We can build our country and eat potatoes too, can't we? Or is Egypt on a diet?" Mai Seif El Din lashed out in a Facebook post that has been liked by more than 450 people. Another internet user shared a picture of a man chasing after his wife with a stick, with the caption, "Because she asked him to buy her two kilograms of potatoes!"

"Eat potatoes and forget what happened in Kenya," was another tongue-in-cheek Facebook post, in reference to Egyptian soccer club Al-Ahly's 3-0 defeat by Tunisia's Esperance in the African CAF Champions League on Nov. 9. Human rights lawyer Gamal Eid joined the chorus of sarcasm on Twitter. "Bread, Freedom, Social Justice, Human Dignity … and Potatoes!" he chipped in, using the revolutionary slogan of the 2011 uprising to poke fun at the government.

The backlash is not surprising given that potatoes are a filling mainstay in the average Egyptian's diet. In the last two weeks, a steep hike in the price of the vegetable — to triple its original price — fueled outrage among Egyptians struggling to cope with the high cost of living, following the lifting of fuel subsidies in June - the third such price hike in two years. Concerned that the growing discontent over the price increase could spark a new wave of protests, the Interior Ministry quickly stepped in to contain what is being referred to in Egyptian media as a "potato crisis." Blaming the crisis on "greedy wholesale traders," whom the government says are hoarding the potatoes in warehouses to deliberately push up the price, the ministry has set up its own makeshift food outlets where potatoes are being sold at reduced prices. Egyptians are lining up in droves outside the government-run outlets in scenes reminiscent of the long bread lines, where Egyptians typically queue for hours to buy subsidized bread.

Since the flotation of the Egyptian currency in November 2016, food prices have soared in the country. At 80 Egyptian pounds (around $4.50) per kilo, the price of meat is well beyond the reach of the average public sector worker whose minimum wage is a meager 1,200 pounds (approximately $67). For Egypt's low- and middle-income families meat is a luxury reserved only for special occasions. At 44 pounds (roughly $2.45) a kilo, poultry is also off-limits to low-income households that rely instead on potatoes, rice and pasta. Foul (brown beans) and French fries sandwiches are the favored breakfast for many cash-strapped Egyptians, while lunch often consists of a bowl of koshari, a traditional local dish made of rice, pasta, lentils and chickpeas with a spicy tomato sauce topping. The carb-laden foods consumed by Egyptians and the lack of exercise have contributed to the high rate of obesity in the country: 35% of Egypt's adult population are obese, according to a 2017 study published in the New England Journal of Medicine.

The high cost of living has taken its toll on Egypt's shrinking middle class with many having to work extra shifts and cut back on their expenses to stay afloat. And it may be a while yet before things get better for those hardest hit by the painful austerity measures that have included the slashing of state subsidies on fuel and electricity and the raising of taxes. Sisi hinted at the World Youth Forum that there will be no salary increases for state employees this year as the government needs the money to build new classrooms in overcrowded schools. The news disappointed civil servants, accustomed to getting a raise at the end of each fiscal year. It also prompted a fresh wave of sarcasm on social media. Using the Arabic hashtag #No_Raise_And_No_Potatoes, activists defied Sisi's warnings against "the misuse of social media" to vent their anger at the government. "How much [in tons of potatoes] did the Youth Forum cost? Please don't tell me that the state did not pay even one potato chip from its coffers!" was one scornful comment on Twitter.

In a pun on the word "kosa" — Arabic for zucchini and which is also commonly used in Egypt to refer to state corruption — another Twitter user lamented, "Potatoes don't build a state; everyone knows that the state is built on zucchini, not potatoes."

Egyptians may have lost much of their savings in recent years, but at least they have retained their humor and wit. And it is helping them survive in these difficult times.