The opposition parties’ request to be informed about the developments in Mosul was turned down June 25, leaving the public in the dark about the hostage crisis. 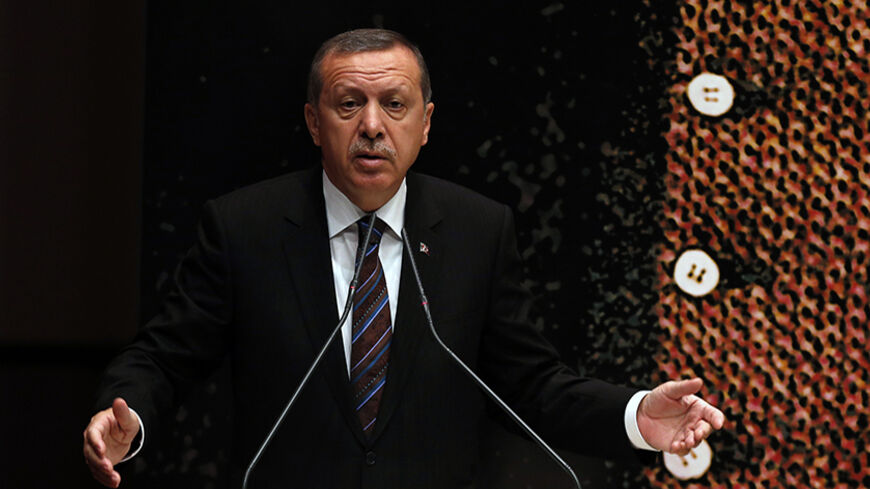 Since Turkey’s 49 consulate staff and their family members were taken hostage in the northern Iraqi city of Mosul on June 11, Turkish Prime Minister Recep Tayyip Erdogan’s government has taken all measures to keep the public in the dark on the issue. The prime minister first warned the media on June 15 not to write or talk about the developments in Mosul. A Turkish court followed up on the warning the next day by imposing a gag order to all print, visual and Internet media. The government is now applying a similar gag order to opposition party members in parliament, denying their requests to be informed about the issue.

There was talk of convening a special session in parliament in the immediate aftermath of the hostage crisis. The government, however, argued that anything that could be revealed at that session could put the lives of 80 Turkish citizens — including 31 truck drivers besides the 49 from the consulate — at risk and the opposition complied at the outset. However, the opposition party members of the parliamentary Foreign Affairs Committee decided they wanted to be kept informed of the “seizure of the consulate and all its staff members taken hostage” just as the special session on the floor of parliament was canceled.

According to parliamentary regulations, one-third of the committee members' signatures is considered enough to request the discussion of an issue. The committee has a total of 26 members. On June 17, nine of the committee's opposition party members — five from the Republican People’s Party (CHP), not including Oktay Eksi, who was traveling, three from the Nationalist Action Party (MHP) and one from the pro-Kurdish People’s Democratic Party (HDP) — signed the petition demanding to be fully informed of the developments in Iraq. The total of nine met the minimum requirement to bring the issue to the agenda of the committee.

When they convened this morning, June 25, however, they ended up walking out in protest. Osman Koruturk, a CHP deputy and a member of the committee, told Al-Monitor, “Despite the three opposition parties’ request on June 17 in accordance with our parliamentary regulations requesting a special session on the assessment of the crisis in Iraq and ways to produce a solution, commission Chairman Volkan Bozkir did not put the petition on the agenda, stating, 'The Ministry of Foreign Affairs did not positively reply to the commission’s request, and the ministry did not provide any expert to brief the members on the issue.'” A retired ambassador, Koruturk was Turkey’s first special envoy to Iraq between 2003 and 2005. “If this is not a topic considered important and vital for the Foreign Affairs Committee, the government must consider our function only to be the approval of routine matters. This cannot be accepted,” he said.

While the opposition party members also demand an answer from the Turkish Foreign Ministry for its failure to inform the parliament members, they also question whether this was a deliberate government decision to keep the parliament uninformed on the subject.

“We are all Turkish citizens, and we put the lives of our countrymen before anything. However, the government seems to be hiding behind this sensitive moment and avoids informing the parliament about the developments in Iraq; the situation at our seized consulate; the challenges that Turkmens face there — particularly at Tal Afar, and where we go from here,” Sinan Ogan, an MHP deputy from Igdir and a member of the committee, told Al-Monitor. The Islamic State of Iraq and al-Sham (ISIS) took control of the mainly ethnic Turkmen town of Tal Afar on June 23 after days of heavy fighting, and Ogan has been persistently questioning the government what it is doing for the well-being of the Turkmens there.

“If you don’t inform the parliament at a time when a piece of Turkish land is seized, when our ethnic brothers come under fire, when will you inform the parliament? We believe that the government, facing its own failure, cannot face us to answer our questions,” Ogan said.

Koruturk agreed. “We — as the CHP members of the committee — strongly condemn the AKP government’s decision to bring a court order banning the coverage of such a vital national security issue; these attempts are hiding its bad governance of our country’s interests,” he told Al-Monitor.

Former high-level state officials speaking to Al-Monitor on condition of anonymity stressed that they are surprised that there were women and children at the consulate. “The government is manipulating the issue by arguing that we had to maintain our presence there due to our historic connection despite the deadly challenges,” a former high-level state official said. “There is, however, nothing more important than life and the state also has a responsibility to implement this rule at critical times to preserve and honor the well-being of its state representatives. There can never be a credible justification for keeping the women and children there. They just needed to minimize the number of personnel there, but they did not. Why? One really wonders!”

While the government refuses to inform the opposition party members in the parliament, Erdogan said June 25 at his party’s provincial representatives meeting that his administration is ready for all kinds of options. “Turkey is doing its utmost best for our abducted citizens, and our Turkmen brothers. Believe me, we are doing the maximum we can,” he said. “We stayed in close contact with the Iraqi Kurdistan regional government, the UN and NATO, the United States, England, Saudi Arabia and other regional countries about our abducted citizens in Mosul. We are pursuing all options. We are, however, first refraining from any kind of acts that will put our citizens’ lives at risk. Both the CHP and the MHP are doing the best they can to risk their lives (of those abducted). They have never in their history carried the responsibility of our people.” He added, “Their pro-opposition media is trying to provoke us to adopt a provocative rhetoric toward ISIS. We have about 80 people in their hands. If we make any provocative statement, we will just add fuel to fire. This is what we call making politics with blood. They came to a point of wishing that something happens to our citizens so that they can score against the government.”