A Turkish court followed up on Prime Minister Recep Tayyip Erdogan’s urging of the media not to report and comment on the Mosul hostage crisis, and decreed a gag order until the diplomats are freed. 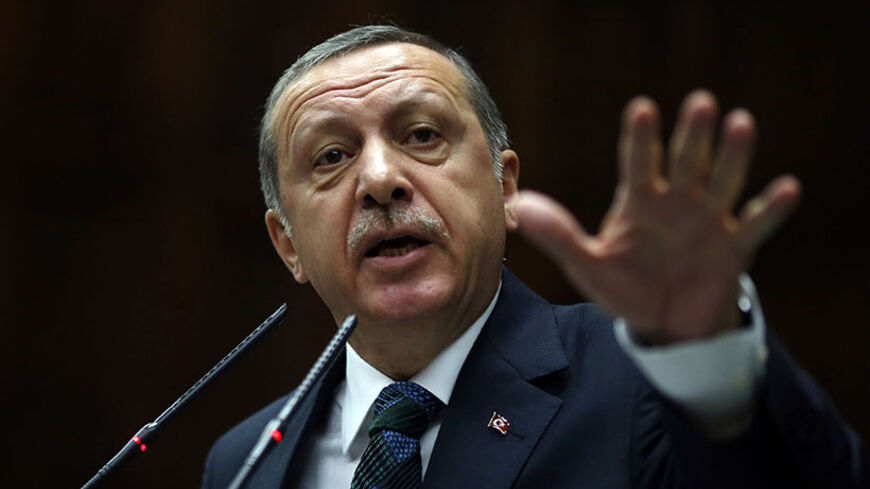 On June 15, Turkish Prime Minister Recep Tayyip Erdogan called on the media not to write or talk about the Islamic State of Iraq and al-Sham (ISIS), which seized Turkey’s consulate on June 11 in Mosul, in northern Iraq, taking all 49 consulate workers hostage, including the consul general. Erdogan claimed that the media’s reporting puts the hostages’ lives at risk. Deputy Prime Minister Bulent Arinc followed up on this warning the next day urging the media not to provoke ISIS with remarks. The Turkish Foreign Ministry even stated that those taken by ISIS are “not hostages,” but “Turkish citizens taken to an unknown location.” In line with heavy pressure to silence the media on the situation, an Ankara court issued on June 16 a gag order ruling that “all kinds of print, visual and Internet media are banned from writing and commenting on the situation” until the Turkish citizens in the hands of ISIS are safely rescued. And Turkey’s Supreme Board of Radio and Television (RTUK) delivered the court’s decision to all media executives early June 17, saying the ban was effective immediately.

While the Turkish media started obeying the court order, Turkey’s main opposition Republican People’s Party (CHP) filed an appeal on June 17 — the same day the media ban took effect — that there should be no state-imposed censorship on covering the ISIS developments in Iraq and Turkey’s surroundings. Aykan Erdemir, CHP deputy from Bursa, however, sounding pessimistic, said the challenge is not likely to reverse the decision. “This court decision is a politically motivated one where the government solely aims to manage the perceptions of our people in Turkey. Yet, this approach promises to cause our country more problems in the medium and long term,” he told Al-Monitor.

Sinan Ogan, the opposition Nationalist Action Party (MHP) deputy from Igdir, who took the stage at the parliament's general assembly on June 10 — the day before ISIS took Turkish diplomats hostage — and warned that Turkey’s Mosul consulate was being surrounded by radical extremists calling the parliament to act, agreed. “The media should certainly act responsibly during times of crises and pay utmost care not to put the lives of those taken hostage at risk,” he told Al-Monitor. “However, it was the pro-government dailies in particular that reported on critical details about the personal telephone conversations between special force members and their families, directly risking the lives of those in ISIS hands. Or, they reported the names of the tribes with which Turkey is trying to open a back channel in an effort to safely rescue the hostages. This is crucial information that should not have been in the public domain at this stage.” Ogan said, “We, however, unfortunately almost always fail to make a distinction between issues. While we should demand that the media act professionally, making the safe return of these Turkish citizens a priority, it should have been out of question to bring about an all-out media ban on covering the developments in Mosul. On the contrary, people should be well informed about ISIS actions and movements in Iraq.”

Diken, a new online news analysis portal in Turkish, wrote that a lower court first denied the government request for a media ban on developments in Mosul, but that the 9th High Criminal Court had issued the ban. It is the same court that also issued a ban on covering the May 2013 Reyhanli attack; the December 2013 graft probe targeting Erdogan’s role in the corruption and bribery ring; the trucks that were seized in Adana by a local prosecutor’s order carrying questionable supplies to Syria, which eventually appeared to belong to a Turkish intelligence unit operation; and the leaked audio surveillance at the Turkish Foreign Ministry about potential military engagement scenarios in Syria. While commentators in the mainstream media chose silence on the issue a day after the decision became effective, it is clear that no one wants to pay a price for violating a court order.

Whether the government is trying to cover up a policy that went awfully wrong in the case of ISIS, the opposition parties are adamant in their warning that ISIS now constitutes a threat to Turkey’s national security. “We sent al-Qaeda militants to the Middle East,” CHP leader Kemal Kilicdaroglu said on June 17 at his party’s regularly scheduled parliamentary group meeting. “They came to Turkey from various countries, and we allowed them free passage to Syria. We now start paying a price for this.” He said, “The government now tells us that we should not call ISIS a terror organization. Why? If we say so, they would kill those at their hands. … But we have been the ones to arm them, feed them, treat them in Turkey when injured. How could he [Erdogan] admit that it is a terror organization? He wouldn’t. They are now biting the hand that fed them. This is where we are today.”

MHP leader Devlet Bahceli echoed the same sentiment during his regular parliamentary group meeting. “The Justice and Development Party’s (AKP) policy toward Syria based on animosity toward (Syrian President Bashar al-) Assad led our borders to be filled with radical and violent extremists. Two border passages between Turkey and Syria are currently controlled by ISIS,” he said. “Although Foreign Minister (Ahmet Davutoglu) claims that ISIS is a criminal organization working on behalf of the Assad regime, there are some signs, some links, some evidence that plainly classifies the AKP with these radical violent organizations.”

Erdogan, however, continues to argue that the government's foreign policy toward the Middle East has been the right one, and slams the opposition for failing to correctly understand it. “The CHP [leader] has recently started to talk about a Middle East quagmire,” Erdogan said during his June 17 parliamentary group meeting. “This is an outright revelation of not knowing history and his illiteracy. Moreover, it is plain racism to call a region a 'quagmire' when millions of people live there. It is proof of the surfacing of his fascist mindset toward this region.” He said, “This is not only racism, but a denial of one’s own identity. Wherever you may be in the world, no one with mercy and conscious can name a region a quagmire. To name a region that we have cultural, ethnic, religious ties with a 'quagmire' only aggravates the already existing problems.”

By the same token, however, none of the problems in Iraq or Syria are a creation of the Turkish opposition. And it is the Turkish government that is imposing a media ban on the coverage of the developments in this region. While the contradiction of the government’s argument should have been obvious, there seems no public outcry against the media ban.

As reported by Al-Monitor, this is the first time after the seizure of the US Embassy and the 444-day hostage crisis during Iran’s 1979 Islamic Revolution that such a large number of diplomatic personnel have been held against their free will. Don Cooke, who was a junior diplomat at the US Embassy in Tehran then — where 66 US diplomats and citizens were held hostage — told Al-Monitor that he believes the media’s coverage helped their eventual safe release.

“In my own case, I was aware of the possibility that I might be taken prisoner or go missing. I gave my father specific instructions that if I was taken prisoner, to make a fuss publicly and keep the issue in the news even if the State Department wanted to keep it quiet, which they, in fact, wanted to do,” he said. “Did public pressure help aid in my release? In the end, yes, because it contributed to the election of Ronald Reagan.” Reagan was elected president in November 1980, and the hostages were released as he took office in January 1981.

Turkey’s opposition, however, argues that because of the AKP’s suspicious relationship with these groups, they will not be surprised if the hostages are released just before the August presidential elections, a move that might help the ruling party’s candidate get elected.