The statement by Turkish Deputy Foreign Minister Naci Koru that Turkey’s Mosul consulate workers are not hostages of the Islamic State of Iraq and al-Sham (ISIS) has confused observers. 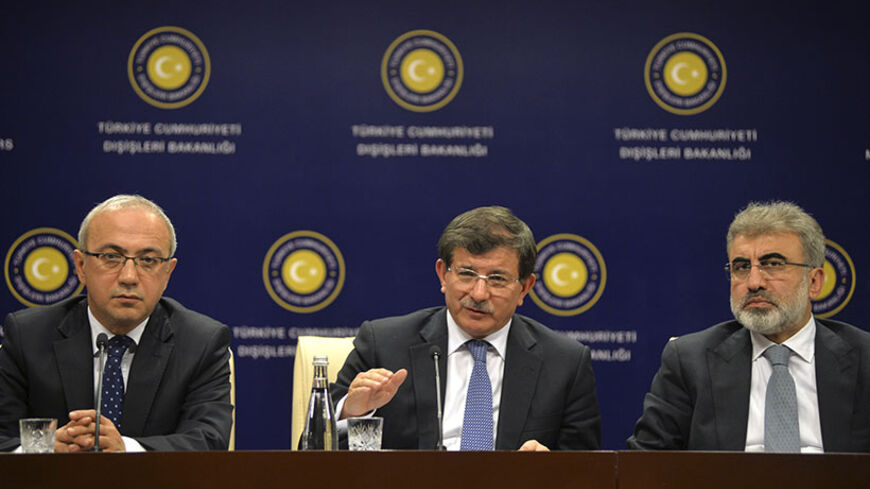 Seizing diplomatic missions and taking diplomats hostage is no ordinary event. Turkish Prime Minister Recep Tayyip Erdogan’s government, however, has been doing its utmost to play down the seizure of the country’s consulate in Mosul on June 11 — by radical Sunni extremists on the day they took control of the city — and the hostage taking of 49 consulate workers including the consul general.

Naci Koru, Turkey’s deputy foreign minister, for example, argued on June 15 that the Turkish diplomats are “no hostages.” “We do not believe that [our diplomats] have been taken hostage,” he said. “If they were taken hostage, there would have been negotiations over the conditions to take them back. They are not asking for anything in return [for safely releasing the Turkish diplomats].”

Since the seizure of the US Embassy and the 444-day hostage crisis during Iran’s 1979 Islamic Revolution, this is the first time a diplomatic mission has been seized and such a large number of diplomatic personnel have been held against their free will. It has now been five days since 49 Turkish consulate workers were taken hostage by the Islamic State of Iraq and al-Sham (ISIS), with no foreseeable end in sight.

Hasan Unal, head of the department of international relations at Atilim University, told Al-Monitor that if ISIS — the al-Qaeda spin-off group — has not actually taken the Turkish diplomats hostage, it could choose to release them without further delay. “This soft approach by the government even makes one wonder whether there is any conspiracy behind this tragedy,” he said.

Turkey has come under international criticism for its alleged support of the Sunni radical groups in Syria fighting against the Bashar al-Assad regime. With the onset of the Arab Spring, Turkey’s desire of having zero problems with neighbors was quickly replaced with an assertive tone aiming to have a direct say in who should be in charge in countries such as Syria and Iraq. Erdogan declined to host Iraqi Prime Minister Nouri al-Maliki in Ankara before the April elections. “The prime minister did not want to portray an image of supporting Maliki,” a Turkish official, speaking on condition of anonymity, told Al-Monitor. “All their bets, however, failed, and Maliki was elected again,” he said. While Maliki has not been re-elected prime minister, his coalition won the most seats, and many expect Maliki to put together enough votes to secure himself a third term.

Unal told Al-Monitor, “ISIS will never be able to take control of Baghdad or move toward the majority-Shiite populated parts of Iraq, but it certainly significantly weakened Maliki’s authority. It is difficult for him to take control of the whole country under these circumstances. This is a problematic image for Turkey as it seems to have supported a group that now destabilizes Iraq, and all the more, has taken Turkish consulate members hostage. This only makes an already complicated situation even more complicated.”

Questions swirl regarding why the consulate was not evacuated in advance, why Consul General Ozturk Yilmaz was allowed to return to Mosul after consultations in Ankara just a week before after he was targeted in an ambush and whether critical diplomatic documents at the consulate were safely destroyed before the ISIS takeover. Nevertheless, Erdogan criticizes the opposition and the media for putting the lives of those Turkish citizens in ISIS's hands at risk by talking about it.

“About 100 of our citizens are under ISIS control,” Erdogan said on June 15. “While we’re trying to safely rescue them, (the media and the opposition) is trying to provoke them. Please, I ask the print and television media to not write or talk about this issue. These provocations are giving tools to the other side that may risk the lives of our people.”

Many in Ankara’s beltway in opposition and critical of the Erdogan government’s Middle East policies agree that the prime minister is simply trying to hush all kinds of criticism of his failed policies.

Erdogan is refusing to give any ground, even after a conciliatory gesture was extended by his critics. The main opposition Republican People’s Party (CHP), for example, withdrew its request of inquiry into Erdogan’s role in the December graft probe and his accusations of a parallel state, stressing that such discussion in parliament would weaken the government at a time when national unity was imperative in resolving the hostage crisis.

Yet, Erdogan in speech after speech continues to fire at the opposition, accusing it of siding with Assad and being involved in treason and terrorist activities. This approach is even more interesting as Erdogan blames the Maliki government for its exclusive policies against the Sunnis as a reason for groups like ISIS finding local support. Yet, Erdogan's accusatory tone against the opposition, using such unprecedented aggressiveness — even at a time when the opposition showed goodwill by withdrawing a parliamentary investigation into his involvement in the corruption and bribery ring — is exactly what he describes as Maliki’s mistake in Iraq. And one, therefore, can't stop but wonder whether he is choosing for chaos to prevail in Turkey.

Hence, Erdogan’s harsh accusations of the opposition and ISIS means there is a threat to Turkey, but whether the Erdogan government considers this a threat is a different question. “Since the Syrian civil war began, it is more evident that the Erdogan government has pursued policies favoring these radical extremist groups trying to achieve their goals through violence — starting with Hamas,” Unal told Al-Monitor. “ISIS was in uniformity with the Erdogan government before on Maliki and Assad, but they now turned against Turkey by taking our people hostage. The government's failure for not considering that they could take our people hostage is worth deeply thinking about.”