For Turkey, no news from Mosul is good news

A Turkish court's ban on reporting about events in Mosul, purportedly to protect the hostages taken from the Turkish consulate, has raised even more questions about Turkey’s approach to the crisis. 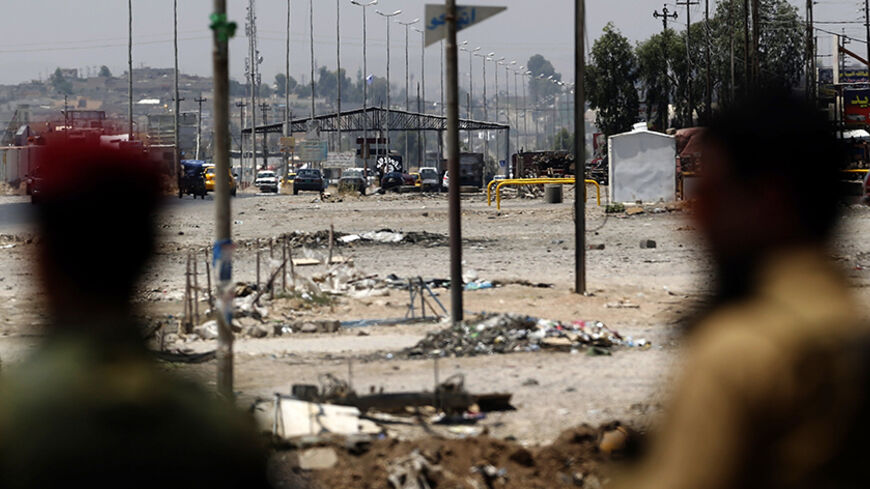 Peshmerga look at a checkpoint held by militants of the Islamic State of Iraq and al-Sham (ISIS) jihadist group in Mosul, June 16, 2014. - AFP/Getty Images/Karim Sahib

If Al-Monitor were a Turkey-based publication, I couldn’t write this article. Yet another problematic press freedom issue has cropped up after a court in Ankara imposed a gag order on all reporting about Mosul.

The court order comes only two days after Prime Minister Recep Tayyip Erdogan criticized the media over reports on the Turkish citizens kidnapped by the Islamic State of Iraq and al-Sham (ISIS) from the Turkish consulate in Mosul. Speaking at a rally in Trabzon, Erdogan said, “About 100 Turkish citizens are in the hands of ISIS elements. What are you trying to achieve by provoking [ISIS] at a time when we are trying to rescue them? This is my request to written and visual media: Please, we want you to follow the process not by agitating, without writing or talking too much about it.”

Although just what the gag order covers wasn’t very clear, Erdogan’s appeal signaled that he wanted to avoid his government getting entangled in political polemics about ISIS capturing the Turkish consulate in Mosul.

A prosecutor and a court in Ankara made the prime minister’s appeal an official gag order. T24 reported, “Prosecutor Durak Cetin, who requested the ban on reporting of Mosul events by visual, print and Internet media based his justification on 'continuing unnecessary, not factual reporting that points to shortcomings of the state and to secure the safety of the consul general and other personnel.' Durak Cetin, who was standing in for prosecutor Sadik Bayindir in charge of the Mosul case, expanded the gag order beyond the ongoing investigations to 'other events in Mosul.'”

This gag order on an issue that certainly concerns many more countries than just Turkey is beyond comprehension and will surely find a place not only in Turkey’s but world press history.

The real point of the court order is the concern for exposure of the Turkish state’s shortcomings. The purported need to protect such a thing is not valid amid the constantly changing priorities of the country’s political agenda. The Turkish media is not really dwelling on “shortcomings of the state” and even if it were, it is not clear how that would affect ISIS’s treatment of its Turkish hostages and endanger their safety.

It is also not clear how this ban is going to be implemented, going beyond reporting on the “state’s shortcomings” to include reporting on events in Mosul. For example, 70 kilometers (43 miles) west of Mosul, the town of Tal Afar's population is nearly all Turkmen. Shiite Turkmen, who make up two-thirds of the 400,000-strong population of Tal Afar, escaped to the safety of the nearby Kurdish town of Sinjar. Nevertheless, there were killings of Turkmen people. Some Sunni Turkmen escaped to the Kurdistan region. Are the spilling over of the sectarian civil war, inflamed by ISIS actions to Turkmen people, and the clashes between Shiite and Sunni Turkmen to be treated as news from Mosul? Are they subject to the gag order?

Fehim Tastekin, an Al-Monitor contributor currently in Erbil, frequently appears on various TV channels. His reports are regularly printed in Radikal, Hurriyet and the Hurriyet Daily News. What of his work?

Turkey’s main problem is not the “about 100 citizens” including diplomats and their families becoming hostages, as Erdogan said. The issue here is the depiction of Turkey as incapable of fulfilling its obligations to Turkmen, its kinsmen in Iraq, and allowing ISIS to depopulate Tal Afar with its bloody onslaught.

Turkish TV stations are frequently connecting by phone to Iraqi Turkmen Front officials, who constantly plead for assistance and even intervention.

The governing Justice and Development Party (AKP) is obviously distraught with the prospect of nationalist public opinion, traditionally extraordinarily sensitive to the plight of Iraqi Turkmen, being adversely affected by the situation, which in turn might affect voting in the approaching presidential election.

Meanwhile, besides the news about the hostages in the hands of ISIS, reports on killings of Turkmen continue to be aired in Turkey. On June 17, evening reports said ISIS militants entered the construction site of a Turkish contractor near Kirkuk and took 15 Turkish laborers hostage. Around the same time, Turkish TV channels aired reports from the Iraqi Turkmen Front that three Turkmen villages near Tuz Khormato, half an hour's drive from Kirkuk, were captured by ISIS and that three Turkmen were killed and eight wounded.

For Turkey to engage in a military operation in such a chaotic situation is not only unwise, but impossible. It doesn’t have the unilateral operational power needed for such an undertaking.

Just as Turkey was silently trying to recalibrate its Syria policy, it was challenged by the developments in Iraq. Its flag was lowered in Mosul and diplomats taken hostage. Ironically, the ISIS advances brought up the possibility of cooperation and coordination between the United States and Iran. US Secretary of State John Kerry, in an interview with Yahoo News, also suggested that cooperation with Iran was a possibility, saying, "I wouldn’t rule out anything that would be constructive." The International New York Times reported that Kerry also said that US airstrikes on the Sunni militants were a possibility.

However, Turkey, while its citizens are held hostage, is understandably hostile to the idea of US airstrikes on ISIS.

Tolga Tanis, Hurriyet’s Washington correspondent, disclosed in his June 15 column that the undersecretary of the Turkish Foreign Ministry, Feridun Sinirliolu, who was in the US capital at the time of Mosul's fall, asked his US counterparts to refrain from airstrikes on Iraq because they would jeopardize the lives of Turkish hostages.

Actually, even calling them hostages is controversial. Turkey's Deputy Minister of Foreign Affairs Naci Koru said there was no ransom demand from ISIS and that it wouldn’t be right to call the Turkish citizens in the hands of ISIS “hostages.”

These remarks might have been made to dismiss impressions that Turkey was bargaining with a terrorist organization.

Another paradox is the tendency portrayed in the pro-AKP press to put most of the blame for the situation in Iraq on Maliki’s sectarian policies. Iraqi Sunnis are spared the venom of AKP circles in Turkey.

In such a messy situation, the best answer the AKP could find was to clamp down on any news related to ISIS that could add to the Turkish government's increasingly embarrassing situation. But will that help them ignore Turkey’s political blunders in Syria and now in Iraq?