After declaring it had formed the caliphate of all Muslims and changing its name, ISIS raised its flag in the Syrian town of Tell Abyad just across the Turkish border. 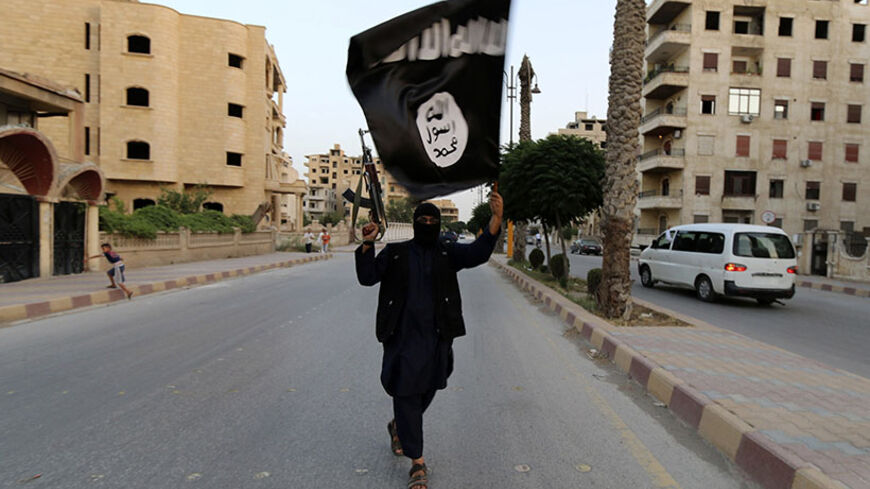 A day after declaring itself an Islamic caliphate and calling on Islamic factions worldwide to pledge their allegiance, the Islamic State of Iraq and al-Sham (ISIS), now calling itself the Islamic State, raised its flag June 30 in the town of Tell Abyad, Syria, just across the border from Akcakale, Turkey.

That flag, however, has been up and down there since January 2014, with ISIS trading control with the Free Syrian Army (FSA). The ISIS flag had been removed from Tell Abyad just two weeks ago.

On June 25, Turkish Prime Minister Recep Tayyip Erdogan blamed opposition parties for risking the lives of 80 Turkish citizens held by ISIS — 49 consulate members in the northern Iraqi city of Mosul, including the consul general, and 31 truck drivers — for criticizing his ambiguous approach to the extremist group, an approach that had the goal of bringing Syrian President Bashar al-Assad’s regime down. “No one should expect me to provoke ISIS,” Erdogan said. “Eighty of our citizens are being held by this group. They expect us to make provocative statements regarding this group. They expect us to approach the fire with a stoker in hand.”

There was no reaction June 30 from the Erdogan government to the ISIS flag visible from Turkey's Sanliurfa province. Moreover, a Turkish Foreign Ministry official who asked to remain anonymous told Al-Monitor that Turkey does not consider “either ISIS or the other radical groups as a direct threat to our [Turkey’s] national security.”

However, Armagan Kuloglu, a retired major general, argues that all these radical extremist groups surrounding Turkey’s borders, whether in Iraq or in Syria, do actually constitute a national security threat. “They can’t name it as such for ideological reasons,” he told Al-Monitor. “The only threat that the government considered was to the Tomb of Suleiman Shah. That is all.” The Tomb of Suleiman Shah is 35 kilometers (24 miles) from the Turkish border inside Syria and the only Turkish territory outside Turkey proper. The government said that the Turkish soldiers protecting the tomb came under credible threat in April 2014.

Many analysts in the Ankara beltway consider that ISIS has taken the Turkish government hostage, and that Turkish officials are afraid that if they say something, the militants will start executing the Turkish citizens. Turkey’s neighborhood has always been a rough one, but these groups know no rules or limits, and therefore this is a security threat without precedent.

People in intellectual circles say that it's a given that Iraq and Syria won’t be able to keep their territorial integrity intact under the current circumstances, and that each will start splitting apart into at least three pieces. While downplaying the factor that US policies could have dramatically failed in the region, some talk about a “grand strategy” put into action by the United States in reaction to the Sept. 11, 2001, attack by al-Qaeda. Those who make this argument appear to have convinced themselves that the 1916 Sykes-Picot agreement imposed artificial borders that have proved, almost a century later, to be unsustainable, and that the only way to change them is to create a huge chaos.

Following that line of thinking, the analysts claim that extremists like ISIS are not here to stay and do not constitute a long-term threat to the security of the people in the region — but that sectarian warfare is. Yet, ISIS does not seem to be a group that will fade away easily or quickly. Moreover, if sectarian warfare is a long-term threat, groups such as ISIS are the ones to spill the blood.

Considered as too radical even by al-Qaeda, ISIS draws its strength from battle-hardened Iraq. It announced in a written statement on June 29 that its leader Abu Bakr al-Baghdadi is the caliph for the Muslims everywhere, and changed its name to the Islamic State. It wants to establish a medieval-style caliphate, erasing borders from the Mediterranean to the Gulf and declaring that Shiite Muslims deserve death.

And if Ankara still remains in back-channel communication with these groups, it's only fair to speculate that they have raised the flag at the Turkish border again to send a clear message about their presence at Turkey's doorstep to the Turkish people.