Turkey not asking NATO for help with ISIS

Turkey briefed NATO ambassadors regarding the seizure of its Mosul consulate, but it did not ask for any NATO involvement, as Prime Minister Recep Tayyip Erdogan appeared to be engaged directly in the hostage negotiations. 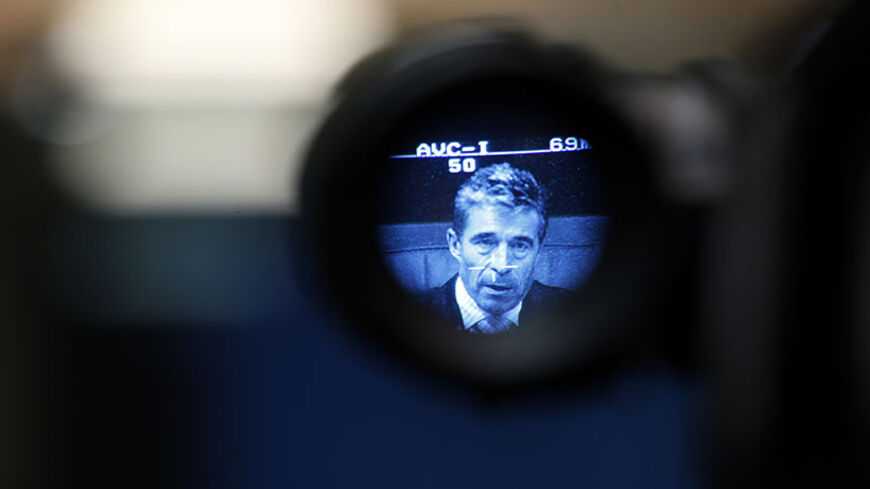 NATO Secretary General Anders Fogh Rasmussen is seen through a viewfinder as he addresses the media during a joint news conference with Spanish Foreign Minister Jose Manuel Garcia-Margallo (not pictured) in Madrid, June 12, 2014. - REUTERS/Susana Vera

On June 11, NATO ambassadors gathered in an emergency meeting at Turkey’s request to discuss the rapid expansion of radical Sunni Islamist militants in northern Iraq in which they took control of Mosul and Tikrit. That same day, the Islamic State of Iraq and al-Sham (ISIS), an al-Qaeda spin-off group fighting in both Iraq and Syria, seized Turkey’s Mosul consulate, taking the consul general and his 48 staff members hostage. Earlier in the week, ISIS also took 31 Turkish truck drivers hostage.

“Ambassador Fatih Ceylan outlined Turkey’s perspective of what is going on in particular in northern Iraq and concerns over the safety of the diplomats and children,” David Lute, US ambassador to NATO, told Al-Monitor June 12 in Ankara at a German Marshall Fund event on the upcoming NATO summit. “We did not gather under Article 4 or Article 5.”

According to NATO’s founding treaty, any member state can convene a meeting of member countries under Article 4 to “consult” with them when it feels its independence or security is threatened. This sends a strong political message to the greater world that a NATO member country is concerned about a particular situation. Turkey invoked Article 4 twice in 2012 over the Syria conflict, and the alliance approved the deployment of Patriot anti-missile batteries along the border with Syria.

Article 5 is known as the “one-for-all and all-for-one” article, which has only been invoked once since the establishment of the alliance more than six decades ago, when the United States came under al-Qaeda attack in September 2001. NATO supported the US action in Afghanistan, but stopped short of extending the same unity in its decision to invade Iraq. NATO, however, provided training to Iraqi forces, which ended in 2012.

Turkey’s briefing of NATO in that perspective does not go beyond an informative discussion. “We do not perceive that Turkey is under direct threat [of ISIS],” Deputy Prime Minister Bulent Arinc said June 13, “Although our consulate is considered Turkish territory; although we raise [the] Turkish flag there; although our citizens are taken hostage and although our consul general is hostage, none of these prove that there is a particular message toward Turkey in all of this. I can say it with full confidence that Turkey’s territory is under no threat.”

Whether they pose a threat or not, Turkey has the al-Qaeda franchise groups on its Iraq and Syria borderline. Turkey’s Foreign Minister Ahmet Davutoglu has been on the defensive for over a year about Turkey’s potential links to these radical extremist groups in their fight to bring down Syrian President Bashar al-Assad. Although it is improbable that Turkey directly provided support to these groups, it wasn't until June 3 that Turkey finally designated Jabhat al-Nusra, another al-Qaeda spin-off group, as a terrorist organization. Turkey officially stated that the May 2013 Reyhanli car-bomb attack — the worst terror attack this country has ever seen, killing 52 Turkish citizens — was the work of the Assad regime, but the widespread belief was that it was an al-Qaeda attack.

Turkish authorities speaking on condition of anonymity, however, told Al-Monitor that the ruling Justice and Development Party could not admit it as such back then, and could not spell it out this time in Mosul. “They can’t say it because it would contradict the whole belief system of their core base,” one official said. “But the fact of the matter is that Turkey is certainly being threatened by al-Qaeda offshoots.”

Ambassador Lute noted that there was no formal NATO perception that Turkey was facing such a threat. He also said that NATO Foreign Ministers would meet in two weeks and that this subject “could be discussed.” Without Turkey's own request, however, other member countries cannot designate on behalf of Ankara whether it faces a radical extremist threat at its borders. “Just as they made a mistake on their Syria policy, they are making yet another pivotal mistake by failing to admit the threat they’re facing now,” one NATO source told Al-Monitor.

On top of that, Turkish Prime Minister Recep Tayyip Erdogan said June 13, “I talked to our consul general.” This is quite a puzzling statement, as it indicates that the prime minister of the Turkish Republic has directly talked to a member of ISIS. When Davutoglu was asked about it, he said, "I don't want to elaborate on this. It should be kept within the sanctity of these [negotiations].” Even though Turkey could be trying to do its utmost to safely rescue its diplomatic corps and truck drivers, the prime minister’s engagement in such negotiation is quite an unusual one, indicating that Turkey has accepted the ISIS authority at its highest level. Yet ISIS continues to hold 80 Turkish citizens hostage even after Erdogan directly engaged with them.

Although Turkey asks no NATO involvement in this issue, NATO Secretary-General Ander Fogh Rasmussen demanded June 12 “the hostage takers to release the hostages immediately.” He will be in Ankara on Monday in a previously scheduled farewell tour. And NATO foreign ministers will convene in two weeks. Even if this hostage crisis ended with relief in less than two weeks, the expansion of radical extremist terror in the region would likely be part of the conversation. NATO sources also stress that the alliance is very alarmed of the existence of this threat.

Lute noted that even if the issue does not come to the table as a threat to Turkey, there are European jihadists heading toward Syria and this is a concern of the member states. “Turkey does not want any NATO role dealing with these radical elements, because Davutoglu believes he can resolve these matters with the Arab League,” one retired Turkish ambassador told Al-Monitor. “The threat is out there, but they are ideologically blind to it.”