Turkey is in an upheaval over the removal of its flag from a military base. 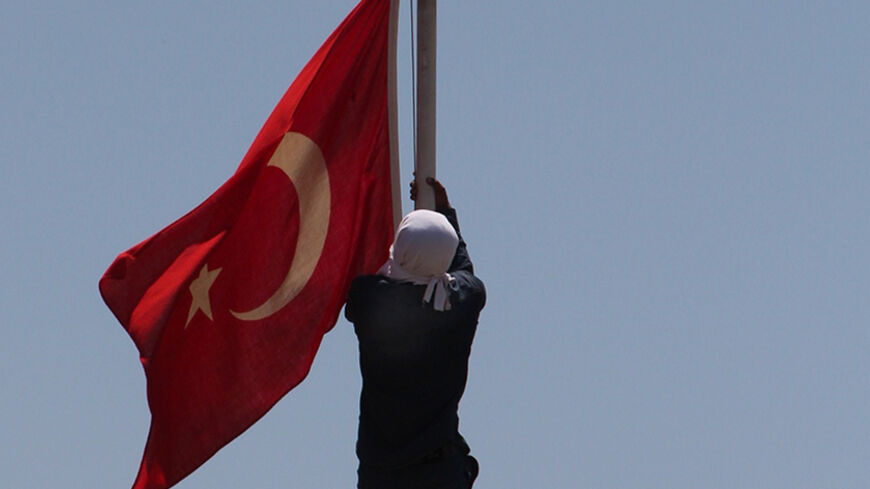 Flags have special meaning in every country, but the sensitivity to flags is so extreme in Turkey that a person accused of insulting the Turkish flag could face death. Although Turkish protesters frequently burn flags of countries whose actions they do not approve of, when it comes to their own flag, the taboo is insurmountable.

Turkey’s not-so-distant-past is laden with the tragedies of people accused of having insulted the flag. One of the first that comes to mind occurred in Cyprus in 1996, when Solomos Solomou, while participating in a funeral procession, began climbing a pole in the buffer zone to lower the Turkish flag. The five bullets that hit him killed him. Were it not for similar incidents in Turkey, Solomos' death might have been attributed to traditional animosity between Turkey and Greece, but such was not the case.

Also in 1996, in Ankara, a masked group of people lowered the Turkish flag during a congress of the Kurdish People's Democracy Party (HADEP). Three people were shot and killed when they returned to their homes in Maras after the congress. Nationwide flag-related protests followed.

Thus, it seems, any provocation using the Turkish flag can have negative consequences, as happened June 8, when a demonstrator climbed the flagpole of the Diyarbakir Second Air Force Command and removed the Turkish flag. The entire country is now obsessed with the episode. Demonstrations are being held, political parties are issuing statement after statement and tension continues to mount. Prime Minister Recep Tayyip Erdogan has accused the military of passivity and has ordered a full investigation.

The first statement from the office of the chief of the General Staff read, “A person whose face was covered, from among demonstrators that included children, jumped over the base gate, entered the vehicle-control area between two fences and climbed the flagpole. The team sent to the location fired two warning shots into the air, and despite their verbal warnings, the person removed the flag from the pole.” The statement concluded by “severely denouncing” the assault against the Turkish flag.

The military's statement was followed on by assorted pronouncements by the parliamentary speaker, minister of justice and political party leaders. The most striking and worrisome came from Erdogan, who said, “I want everyone to react like the people of Tokat town.” According to a report by the T24 website, on June 8 some 30 students in Tokat protesting the killing of two people at Lice (during demonstrations against new security outposts) were threatened with lynching by local residents.

A report by Bianet said citizens in different parts of the country were reacting to the flag-lowering incident exactly as the prime minister had urged. A group demonstrating in Ankara shouted, “Turkey will be the graveyard of Kurds." They also removed placards condemning the deaths at Lice and set them on fire. In the Giresun province town of Piraziz, a group of citizens marched on a construction site, claiming that the Kurdish workers there did not stop work when the national anthem was played. The police intervened to protect the workers. In Malatya, a group attacked demonstrators protesting the Lice killings, and they too were saved from lynching by the police.

What has been playing out in Turkey since the provocation of the flag incident is the result of tensions over the Kurdish issue across the entire country. As Cengiz Candar wrote in Al-Monitor, there had already been clashes between the security forces and demonstrators over the construction of outposts. The Kurds were protesting the presence of the high-tech, fortified facilities in their areas, arguing that they were a threat to the people and reflected the insincerity of the government toward the peace process. As noted, it was during these protests that two people were killed. The flag lowering appears to have been the act of a youngster who had attended the funerals of the Lice victims. Both the flag episode and the reactions to it nationwide indicate how fragile the peace process is.

Statements by the imprisoned Kurdish leader Abdullah Ocalan and Kurdish politicians disapproving of the flag-lowering incident have failed to ease tensions. For Turks who see the peace process as a victory for the Kurdistan Workers Party (PKK) and as shackling the army in the face of terrorists, the flag episode is the straw that broke the camel’s back.

The Lice shootings and the strong reactions to the flag episode both represent manifestations of the Kurdish issue, which Erdogan has annexed to his political career but for which he has not taken steps toward final resolution, creating the current uncertainty. Although a return to the old days of combat is unlikely, the latest developments have provided many the opportunity to revisit old enmities and has sparked the rebirth of nationalist sentiments.