The plan to reduce housing prices for young couples should earn back Finance Minister Yair Lapid's reputation as an ardent social activist, defending the rights of those who served in the army. 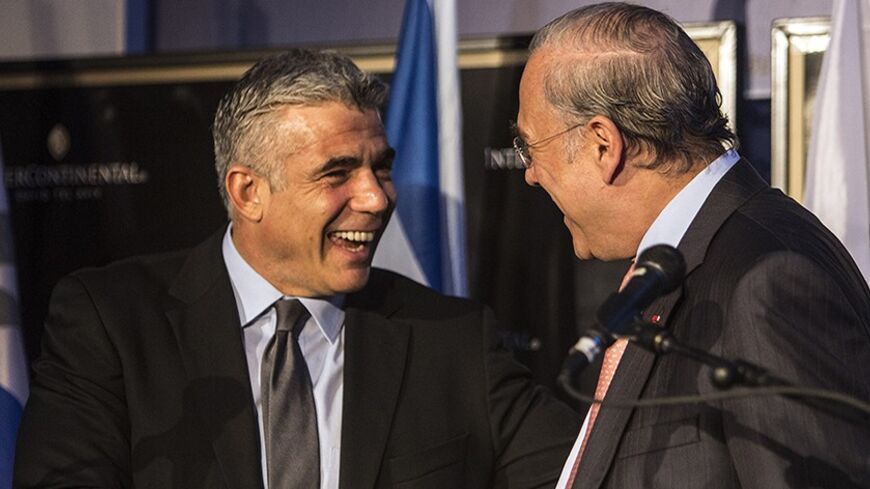 A quick look at the Israeli finance minister's calendar for the past few months suffices to understand what is truly engaging Yair Lapid, the chairman of the Yesh Atid Party, these days: preparations for the approval of the zero value added tax (VAT) plan for first-time home buyers.

Lapid, who came out with his surprising plan in mid-March 2014 to push down housing costs, is working to obtain approval for the bill by the end of the Knesset’s summer session in early August. The legislation is facing a potential minefield and has a legal sword hovering above it. It is estimated that petitions would be submitted to the high court, claiming discrimination against Israeli Arabs and the ultra-Orthodox. The set of criteria defining the benefit eligibility — meaning VAT exemption on apartments costing up to NIS 1.6 million ($460,000) — stipulates that it be granted only to those who have served in the military or volunteered for national service.

Lapid figures he has managed to overcome this legal pitfall in light of an opinion by the attorney general, who announced that those who did not serve in the military will also be eligible but only for housing priced up to NIS 600,000 ($172,000). Nonetheless, Lapid is likely to eventually have to raise that cap to obtain Knesset approval for his bill.

Either way, the zero VAT bill is undoubtedly one of the most pretentious moves, bearing huge risks, undertaken by an Israeli politician in recent years. It is not just the issue of discrimination, but mostly the possibility that the move will achieve the opposite result and housing costs will keep spinning out of control. By the way, senior treasury officials have warned Lapid of this possibility.

Meanwhile, 2½ months after the nighttime meeting at which Lapid presented his plan in the prime minister’s residence, politically speaking, the move appears to have extricated him from the downward spiral in which he found himself after the January 2013 elections.

For now, the housing market is in a kind of freeze. According to data issued on May 28 by the Central Bureau of Statistics, the sale of new homes dropped 9% in April compared to March, and 19% compared to February.

Lapid, for his part, is starting to enjoy the fruit of his "labor," which portrays him as a politician who not only makes promises but follows through and takes a major step for the sake of the future and economic security of the younger generation. Lapid, who served as a voice for this generation in the last elections and rode its votes on his way to the Knesset, proves that he is fighting for them.

In the meantime, he has rebuffed claims that his plan is “racist and discriminatory." And he had proven to those who performed their compulsory military service that they are at the top of his agenda; as befitting the banner of equal sharing of the defense and economic burden, raised by Lapid at the last elections.

For Lapid, this is nothing less than a political lifesaver. Since assuming the treasury portfolio, Yesh Atid's chairman has experienced a dramatic decline in popularity on all fronts. Yesh Atid, the party he established, has registered shrinking support in the polls, and on the government’s first anniversary, he himself was given a particularly bad score for his performance as finance minister and came in last in an index of the citizenry’s public satisfaction.

As for the question of effectiveness of the zero VAT plan and its risks, a spirited debate is under way in economic circles. The prevailing tendency is to warn against it, but it appears that the strong wave of criticism that accompanied Lapid when he first announced the plan has died down. At the height of the backlash, the treasury’s chief economist, Michael Sarel, resigned to protest what he termed Lapid’s “superficial and mistaken decision.” Who even remembers Sarel now? Even the barbed remarks that Housing Minister Uri Ariel occasionally directs toward Lapid and his plan have dissipated, including those he made in an interview with the Globes financial daily on May 22.

Uriel claimed in that interview that the plan’s biggest flaw is its irrevocability — the tax exemption can never be rescinded because no politician would dare vote to cancel it. The result, as he put it, was a "forever and ever" loss of 2 billion shekels (just over half a billion dollars) a year for the state.

Ariel’s criticism does not sound to the point, given that a priori he is already suspected of not really backing the finance minister. After all, the guy is stealing his thunder in the fight to bring down housing costs, with which the minister of housing should have been credited. True, Ariel came out with a plan of his own, known as “target prices,” which was also adopted by Prime Minister Benjamin Netanyahu, but in fact most of the media attention has centered on the Lapid plan.

According to simple political mathematics, this means that if, within the span of two years, housing costs do in fact decline, the glory will be all Lapid’s.

Ariel’s contention that at issue is a benefit that politically speaking can never be revoked is actually the plan’s strongest point from a public standpoint. “Once zero VAT becomes law, I don’t know a single politician who will vote against this benefit, and that’s all for the best,” Uri Shani, Lapid’s special adviser in the ministerial housing cabinet and the man who pushed the zero VAT plan behind the scenes with all his might, told Al-Monitor. “This essentially tells the public that there’s no need to rush to buy an apartment now because this benefit will not disappear.”

Shani, who at every opportunity has called on the public to wait before buying an apartment, believes this is part of the plan’s potential success. “Once people understand there’s no reason to rush because they will have this benefit in another year or two, as well, the market will cool down and we will see prices dropping, even of second-hand apartments,” he said.

The housing rush on the part of the Israeli public has largely been a cultural manifestation. Unlike other countries, buying an apartment has always been one of the first steps in the lives of all young Israeli couples. But this dream has become increasingly unattainable for many young people in view of a rapid and sharp price rise of dozens of percent. At the same time, the high demand has remained constant.

The real estate bubble has thus become one of the most acute socioeconomic issues and was one of the engines that propelled the social protest of summer 2011. That was the summer when Netanyahu faced hundreds of thousands of demonstrators who rattled the ground under his feet and resulted in his issuing an emergency plan to lower the price of housing, designed mainly for public relations ahead of the elections. After the elections, as always happens with such plans, nothing was left of it and the price of apartments continued to climb.

Lapid’s plan is the first practical step to deal with the problem. Shani said this was what he envisioned when he persuaded Lapid to go for the zero VAT plan. “Lapid is a courageous politician, who made a move, took a risk and showed the young people that he is here for them. In the long run, whatever the result, he will always be able to show that he, unlike others, tried.”

The first step that Lapid took was to bring Netanyahu on board. Netanyahu, who hesitated whether to approve the controversial plan in light of the objections by all the top treasury officials, ended up deciding in favor. From the moment the plan was made public, Netanyahu could not have afforded to be the one who would throw a monkey wrench into the works. This would have caused him grave public damage. He backed Lapid.

Shani, who for years was a close aide to the late Prime Minister Ariel Sharon, knows a thing or two about politics and about Netanyahu. “It was clear to me that Bibi [Netanyahu] would have no choice. I also knew that Uri Ariel, with his 'target price' plan, would want to prove that he is part of the game. This way, the public came out ahead.”

Shani wishes to stress that the zero VAT move is just one piece of a broader plan to push down the cost of housing in the coming years. “The VAT is the club,” he explained, “this is the move designed to strike the first blow and change the rules of the game, and it shows the public that the finance minister is serious. Now the public believes Yair Lapid when he says he truly wants to solve the problem. And for now, it is proving successful. What has happened since? The market came to a standstill. There’s a drop in prices. The market is frozen. It’s hard now to sell a second-hand apartment. We have stopped the price hikes until such time as there will be sufficient apartments on the market.”

To Al-Monitor's question whether this will save Lapid, politically speaking, Shani replied, "I don’t care what this does for him now. What’s important is that in the next elections Yair [Lapid] can prove that he put up a fight and netted results. That always works with the public: a politician who doesn’t just talk, but acts, and the best example that I can think of is Ariel Sharon. So people can be mad at Yair, they can say all sorts of things about him, but they will not be able to say that he didn’t put up a fight."