If Yesh Atid leader Yair Lapid limits himself to only one or two structural changes, the new finance minister can succeed despite his lack of experience, writes Mazal Mualem. 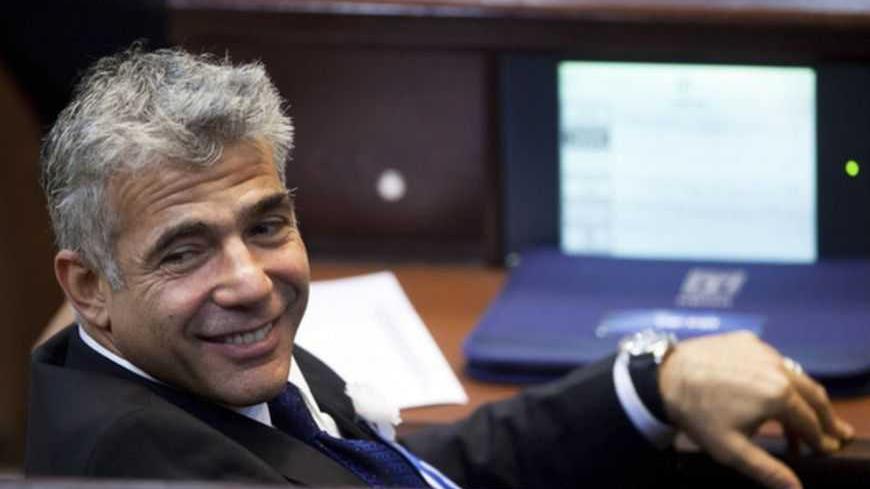 The Finance Ministry does not have to be Yesh Atid leader Yair Lapid’s political burial ground. As opposed to his predecessor Yuval Steinitz, Lapid assumes his post with significant independent political power.

The 19 mandates Lapid received in the elections allow the “rising star of the middle class" to assume his post from a position of strength and conduct himself confidently with the Treasury officials and the prime minister — who in effect was the one who ran the Finance Ministry over the past four years.

Minister of Finance Yuval Steinitz is viewed as one of Israel’s weakest finance ministers, if not the weakest of them all. Traditionally, the Finance Ministry was considered one of the three most important portfolios of the state, assumed in the past by such strong figures as Avraham Shochat, Yitzhak Moda’i, Yigal Horowitz, Pinhas Sapir and even Prime Minister Benjamin Netanyahu himself. It was under Steinitz that the position became emptied of content and influence.

There is not enough space to list the number of occasions in which Netanyahu embarrassed his finance minister by overturning decisions Steinitz made, due to political whims or public pressure, without bothering to update him. Sometimes Netanyahu did this while Steinitz sat in a television studio, explaining why the decision he made was the right one. That is what happened when the rise in the price of fuel and the VAT on fruits and vegetables were cancelled. For his part, Steinitz wasn’t even insulted. He understood that he held his high position only because of Netanyahu’s political power, and that was the price he had to pay for his job.

Lapid, on the other hand, does not draw his power from the prime minister. So far, he has proved in coalition negotiations that he is able to hold his ground opposite the prime minister and demonstrate considerable political skills for a newbie politician.

But no less important is the fact that Lapid does not rely on the power of others in his party, is not politically threatened by anyone and does not have to pacify any political entity or interest group.

It is true that Lapid has a natural, home-based reference group belonging to the highest socio-economic stratum, but he draws his power directly from the hundreds of thousands of middle-class people who voted for him. Therefore, he does not have to worry about holding his own against the tycoons and powerful interest groups in the economy. The citizens who voted for him in Tel Aviv, Kochav Yair, Ra’anana, Migdal HaEmek and Eilat are the ones who will decide whether he will continue to be a leading political power in the next elections and a legitimate prime minister candidate, or just evaporate. Therefore, Lapid’s political independence may be the most important key to his success — but he must know how to use it correctly.

And independence alone, as important as it is, is not enough. Lapid lacks experience — economic as well as managerial — and that is a problematic starting place. Yet he has the means to compensate for it. Lapid has already proved, during the election campaign and the coalition negotiations, that he knows how to surround himself with excellent professionals who are also good friends that want him to succeed.

Uri Shani, for example, is intimately acquainted with the inner bureaucratic workings of the Finance Ministry and served as former prime minister Ariel Sharon’s bureau head. If Shani were appointed CEO of the Finance Ministry, Lapid could rest easy. Someone like Shani could “watch Lapid’s back” from the Treasury officials, who always try to preserve their hegemony in conducting the country’s economy. Shani would protect Lapid from their intense pressures and guide him in becoming a leader who creates guidelines and policy.

In Lapid’s “submarine” he needs — in addition to a strong, experienced CEO who is also his personal confidante — other high-level professional economists who will help him transform the policy he outlines into a realistic action plan.

Lapid will be drawn very quickly into the battle over the 2013 budget, but he has limited ability to influence it. Therefore he must focus on the 2014 budget. That will be, in effect, his first test in introducing policy and proving to the public that he is not only an outstanding campaigner who knows how to formulate what really pains them, but is also the right man at the right time. A second basic condition for Lapid’s success, derived from the first, will be to use the coming months to outline Treasury policy under his leadership. He should focus on one large structural change in the economy — two, at the most — and give it all he has. These changes must be chosen very carefully; their actualization should bring about tangible improvement in the citizens' standard of living.

If Lapid needs a model, he can learn from Moshe Kahlon. As communications minister, Kahlon successfully implemented reforms that changed the rules of the game in the cellular-phone world and had a direct effect on the public's pockets. In his “cell reform,” Kahlon realized his social-justice worldview and valiantly fought the giant cellular-phone companies. Thus he realized his political power as someone who was elected to a high place on the Likud’s former Knesset list. Kahlon chose to focus on this market out of the correct assessment that he could not lead a large number of reforms in one term of office. Post factum, we see that this was the secret of his success.

There is no doubt that Lapid’s success is also dependent on the backing he receives from the prime minister. It is true that, in light of the election results and Lapid’s aspirations to replace him, Netanyahu feels threatened. The last thing he will want to do is build Lapid up into a national-scale leader. But it is not clear that Netanyahu has much choice. Political infighting and arm-twisting between him and his finance minister from the very onset will cause him tremendous public damage in a period that has dramatic implications for the country’s economy. Under these circumstances of forced marriage, both sides have much to lose — and much to gain.