Shas in the Opposition

Shas is having difficulty accepting the idea that it will not be sitting at the government table, writes Mazal Mualem. 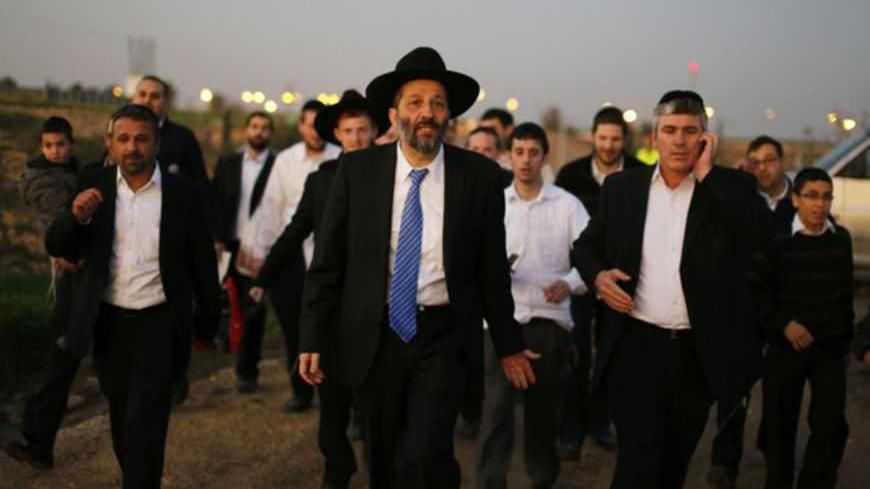 Aryeh Deri (C), leader of the ultra-Orthodox Shas party, attends an annual pilgrimage to the gravesite of Rabbi Yisrael Abuhatzeira, in the southern town of Netivot, Jan. 14, 2013. - REUTERS/Amir Cohen

When the three Shas chiefs arrived at the prime minister’s office on Sunday afternoon [March 3], they already understood what awaited them. They had internalized the fact that their entire election strategy had failed and that their alliance with Prime Minister Benjamin Netanyahu, which had seemed rock-solid to them, was smashed in a knock-out blow by the surprising new political alliance between Yesh Atid leader Yair Lapid and HaBayit HaYehudi leader Naftali Bennett.

Outgoing Ministers Eli Yishai, Ariel Attias and Aryeh Deri — who saw his dream of returning to the government crash into smithereens — still carried a last-minute hope-against-hope that Netanyahu would surprise them with a rabbit-out-of-a-hat solution that would leave them in the government. But instead of that, they heard him say that he has no choice, that Yair and Naftali do not allow him, that with great sorrow he is forced to dispense with them, that perhaps appropriate conditions would emerge later on.

The atmosphere at the meeting was tense and oppressive. At a certain stage, Netanyahu suggested to them, “Go to [Labor party leader Shelly Yachimovich] Shelly, maybe you will succeed in convincing her to join, then we’ll have a government with you. I tried. I offered her a lot, but she is not willing.” Those present at the meeting already knew that this was nonsense: Deri had tried, over the last week, to steamroll the Labor Party chairwoman. In his attempts to convince her to join forces, Deri employed almost every possible argument. He told her that they shared an identical socio-economic worldview, that they would do great things together in the government, that they could avert the harm to underprivileged sectors that was being planned in the government budget. But Shelly Yachimovich remained adamant in her refusal.

As far as Shas is concerned, they have suffered no less than a resounding defeat. Sitting in the opposition is analogous to a curse, and has no value. Deri and Yishai can continue to threaten (meanwhile, in closed meetings) that they will take action in the opposition to bring down Netanyahu, but these statements are aimed at channeling their anger and shock to constructive avenues. It is clear even to them that they would rejoin the government at the first possible opportunity. The one term of office that they sat in the opposition became engraved in the party’s collective memory as a traumatic era to be avoided again at all costs. Yishai himself has not completely recovered from the blow he suffered when former Prime Minister Ariel Sharon forced him into the opposition in 2003. At the time, Yishai was forced to leave the interior ministry to Avraham Poraz, Tommy Lapid’s deputy in Shinui party. Now he is very likely to lose the interior ministry a second time, probably to Tommy’s son, Yair Lapid — how symbolic and cruel. For Yishai, his opposition days were days of budgetary drought and desolation. He promised himself that he would never return Shas to that position again, and assumed that his linkage with Netanyahu would grant him immunity.

Netanyahu and Shas have gone the distance together in recent years. Their alliance enabled Netanyahu to return as government head in 2009. In the year before the elections, Netanyahu had to work hard to regain their trust, and he signed a pact with Shas chairman Yishai. In recent years, Yishai and Netanyahu developed close, mutual ties of trust, familiarity and affection. Yishai believed that these ties would also survive the Lapid-Bennett alliance.

Like Netanyahu, Yishai had not read the new political map correctly.

An example of Yishai’s short-sightedness is his abstention from creating his own alliance with Bennett, in the course of the election campaign. The following information is revealed here for the first time: that about a month before the elections, a confidential intermediary connected the heads of Shas with Bennett, in order to reach quiet understandings during the campaign and create an ultra-Orthodox/national religious axis opposite Netanyahu. Bennett had reservations, but the Shas people did not try too hard either. The party’s leaders believed that their place in the government was a sure thing. It is almost unnecessary to say that such an alliance would have completely changed the political constellation, and prevented the Lapid-Bennett alliance a priori.

Meanwhile, despite their anger at Netanyahu, Shas has decided not to violate the rules of the game. The party’s chiefs are careful not to attack the prime minister directly; instead they direct their anger at Bennett and accuse him of harming the national camp, and toward Yachimovich, who insisted on remaining in the opposition instead of putting the needs of the underprivileged first.

Thus, despite their feelings of having been betrayed, Shas is careful not to treat Netanyahu with disrespect out of the slight hope that things may still turn around in their favor. After all, when it comes to the work of assembling a government, “it’s not over until it’s over.”

In closed meetings, Deri has started planning his party’s long, cold days in the opposition and he already talks about an action plan: that Shas will remove the “equal burden sharing” mask from the faces of Netanyahu, Bennett and Lapid. “Every week we will adopt a new settlement and show how much money it costs us to protect it, how many soldiers are needed to guard 20 people instead of giving to the weak elements,” Deri tried to encourage his entourage, without great success.

But before Shas transforms itself into a “fighting opposition,” the party is trying to come to terms with a new situation that no one predicted. Spiritual leader Rabbi Ovadia Yosef was greatly saddened to hear the news; so say his followers. To him, sitting in the opposition is synonymous with failure and is pointless. Rabbi Yosef always preferred his party’s political leaders in the government and if possible in the Ministry of the Interior, Ministry of Housing and Construction, and Ministry of Religion. Those are the places where the large budgets flow, places that can benefit the Shas electorate. The opposition never interested them.

Therefore, the urgency of the crisis for Rabbi Ovadia’s party cannot be overstated. Shas went to elections while secure in its alliance with Netanyahu and sure of its place in the next government. Now it is forced to concede its strongholds in the Ministry of the Interior, Ministry of Housing and Construction, and Ministry of Religion for the benefit of Naftali Bennett, the most-hated person today in the ultra-Orthodox party. It was Bennett who was wise enough to create a winning political alliance, over the heads of the three experienced political foxes sitting at the head of the Shas party.