Israeli citizens are experiencing their first real security threat since the social protests of 2011, threatening to turn the national priorities from socioeconomics and social justice back to security. 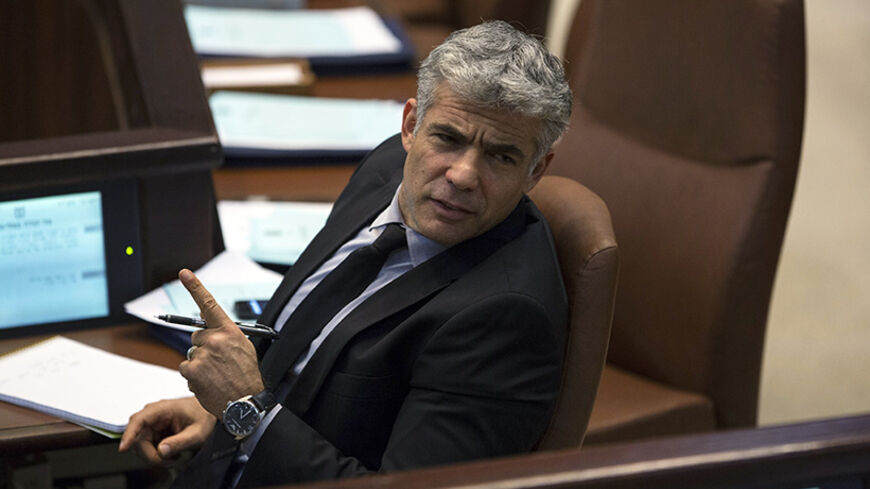 Israel's Finance Minister Yair Lapid gestures as he attends the opening of the summer session of the Knesset in Jerusalem, April 22, 2013. - REUTERS/Baz Ratner

A heated fight is taking place these days in the Knesset’s Finance Committee, very much beneath the public radar, largely because of the fighting in Gaza. This battle calls into question the ability of Finance Minister Yair Lapid to enact one of the signature decisions of his term as minister so far: approval of the law to exempt buyers of a first apartment from paying a value-added tax (VAT) by Sept. 1.

On July 31, the Knesset will begin its summer recess. The “Zero VAT Law,” which should be Lapid’s greatest accomplishment for the next elections, is still stuck in the Finance Committee, waiting for approval in its second and third reading. The chairman of the committee, Knesset member Nissan Slomiansky of HaBayit HaYehudi, is heaping obstacles before the approval process of the bill, especially with the head of his party, Economy and Trade Minister Naftali Bennett, busy plotting in the background. Once a close ally of Lapid, Bennett has since become one of his major rivals. Knowing that Lapid is under a lot of pressure, Bennett is taking advantage of that to get more money for the settlements, or so say other members of the Finance Committee.

Lapid will do everything in his power to ensure that this law, which passed its first reading at the beginning of July, is approved by the Knesset before it adjourns for the summer. Members of the committee say that even though Lapid is also a member of the Defense Cabinet, spending many hours dealing with Operation Protective Edge and visiting the south, he is still very preoccupied by the fight over his proposed law, which is intended to provide a solution to the high cost of housing in Israel.

The fate of the law remains uncertain, at least at this stage, but the committee believes that Lapid will show some flexibility and acquiesce to the demands of Slomiansky and Bennett so as not to embarrass himself publicly and politically. The law, which grants military veterans an exemption from VAT when they buy an apartment worth up to 1.6 million shekels (about $470,000), is intended to be the crowning achievement of his terms as finance minister. It is supposed to bolster the Yesh Atid Party’s standing among younger members of the middle class, a group whose support for Lapid and his party has dropped dramatically in the polls since the last election.

When it comes to Israel’s public agenda, it is only natural that Operation Protective Edge reshuffles the deck. It pushed security issues back to the top of the national agenda after a lengthy three-year hiatus, starting with the 2011 summer protests, when socioeconomic issues rose to the top of the agenda. Even Operation Pillar of Defense, about two months before the Knesset elections in January 2013, took public attention away from civil affairs only for a short period. The results of the election reflected the impact of the social protests and almost cost Prime Minister Benjamin Netanyahu and the Likud Party the election. Lapid and Bennett, the two rising stars, attribute their successes to the socioeconomic agendas they featured in their respective campaigns.

It was in this atmosphere that almost every minister in the current government competed over who could enact the most sweeping social reforms. Transportation Minister Yisrael Katz pushed vigorously to privatize Israel’s ports, while Communications Minister Gilad Erdan has been spearheading the movement to shut down and reopen the Israel Broadcasting Authority. Even the security budget, which was until recently the sacred cow of the Israeli economy, was cut for the sake of changing priorities. Lapid may have been the big winner in the elections, but the Finance Ministry wore him out. People considered him a disappointment, and he lost the support of many of his voters, who continued to complain about the high cost of living, while their dream of one day owning an apartment drifted further and further away.

The Zero VAT Law was supposed to be the finance minister’s lifeline. If it does eventually pass and manages to burst the real estate bubble, Lapid could run in the next elections with a major achievement under his belt, and win back the support of at least some of the voters who abandoned him.

Elections are not expected to take place in the near future. Nevertheless, it is obvious that Operation Protective Edge — which more closely resembles an outright war every day — has completely overturned the country’s priorities. The public focus on socioeconomic issues today has declined considerably.

As far as he is concerned, Netanyahu prefers this agenda. It gives him a significant advantage over all the other political players, including those hoping to succeed him. A large part of the public considers Netanyahu largely responsible for Israel’s economic woes, attributing the country’s problems to his term as finance minister from 2003 to 2005. On the other hand, polls show him coming out far ahead of any other potential political rival when it comes to matters of diplomacy and security.

Furthermore, the endless stream of reports about how Hamas planned to launch strategic attacks against Israel through dozens of tunnels connecting the Gaza Strip to Israel have made the public far more sensitive to security issues. Widespread public support for Operation Protective Edge and the ground incursion brought Israelis back to the familiar paradigm in which security figured first and foremost. And all this happened after that approach was challenged, most noticeably in the many calls for deep cuts to the defense budget.

During the early days of this month’s ground incursion, seven Israel Defense Forces (IDF) soldiers were killed because of what preliminary investigations suggest were problems with an old armored personnel carrier that should not have been used in an operation of this magnitude. The incident led to criticism of the aforementioned cuts to the defense budget, which forced the IDF to use outdated and more vulnerable equipment. It seems almost certain that in the 2015 budget debates slated to take place immediately after the fighting in Gaza ends, the budget for defense will be increased.

Beyond the defense budget, however, the question remains whether the enormous security crisis now facing the people of Israel will overshadow the various socioeconomic struggles they have waged and set the agenda for the next election. The person who should be most worried about this is Lapid. Considering that this is the first real security threat faced by Israeli citizens since the social protests, he can expect to have a hard fight ahead of him.