A Republican People’s Party (CHP) deputy tells Al-Monitor how his party is failing to capture the youthful dynamism of the country. 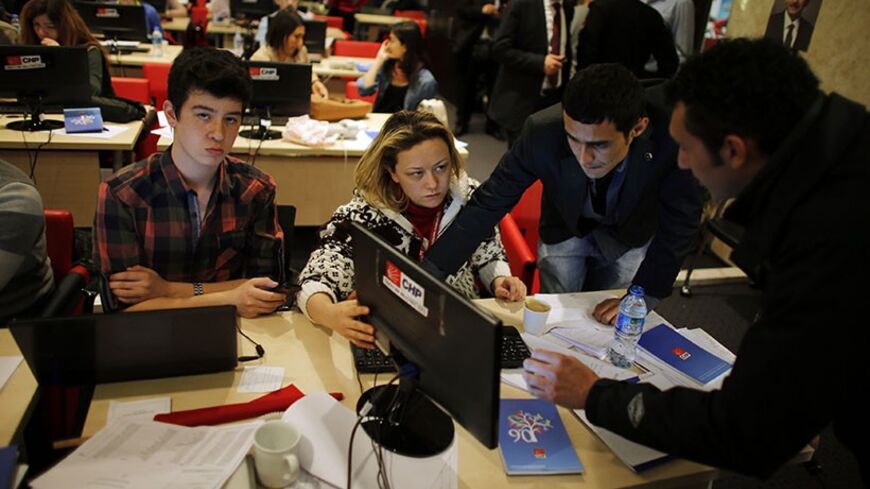 Turkey’s main opposition Republican People’s Party (CHP) has consistently failed to dispel the impression of a party in a state of total disarray with little chance of holding power. Its lackluster results in the March 30 local elections, especially in the large metropolitan areas and at a time when the ruling party was the target of a graft probe, threw it further into the doldrums.

As if that report card were not troubling enough, Orhan Oven, a member of the ruling Justice and Development Party (AKP) punched CHP leader Kemal Kilicdaroglu in the face on April 8 in parliament. The AKP quickly expelled him. Weeks later, on April 22, Bilal Erdogan, son of Prime Minister Recep Tayyip Erdogan, filed a libel lawsuit against Kilicdaroglu, and the police attempted to arrest Safak Pavey, CHP deputy chairman, during May Day celebrations in Istanbul. Thus, the CHP continues to fail in rallying people behind it, and appears cursed in its opposition to the AKP.

While partly agreeing with this outlook, Aykan Erdemir, a junior CHP deputy from Bursa, also argues that this is not the entire picture.

“One has to admit that Prime Minister Erdogan skillfully manages the public’s perceptions, but the fact of the matter is that this [March 30] election signaled that the era of single-party government is nearing an end,” Erdemir told Al-Monitor. “Konda [a well-known public survey group] had shown the AKP not long ago receiving the support of 55% of the people. They started to lose that support gradually, due to their troubling education system reforms, Syria policy, Gezi park protests and the Dec. 17 graft probe.”

“If people went to the ballot box today for general elections based on the current rules of election, the AKP could only send 275 to 280 deputies to the parliament, where they would barely form a single-party government,” Erdemir said. “But no one is talking about this fact in Turkey, and that is a success of the prime minister.”

Erdemir added, “It is just further challenging for the CHP though, as it has to receive at least 40% of the nationwide vote to gain power. There is no such obligation in Europe, and therefore the talk about the social democratic parties [there] is not identical to the narratives that we talk about concerning the CHP in Turkey.”

Erdemir nevertheless has serious criticisms about the structure and composition of the CHP. “This party has to attract younger members, ideas, narratives and tools,” he told Al-Monitor. “The reason is simple: Turkey’s demographics make it as one of the youngest countries in Europe. Half of the population is younger than 30 years of age, and half of the voters are younger than 40 years of age. Yet only six of our deputies, out of the 135 who were elected to parliament in the last general election of June 2011, are under the age of 40. In other words, we represent half of the population through only 4.4% of our deputies. This is systematic discrimination against the youth of this country.”

Erdemir contends that the CHP has failed to grasp the message of the Gezi Park protests of May and June 2013. “The CHP has failed to comprehend the following fact: The Gezi protesters on the street not only demanded our support, the right narrative or even the right policies. They demanded that this country step up against gerontocracy. This is not a problem exclusive to the CHP, but definitely half of the population objects to being ruled by an older generation dominated by men.”

Erdemir said, “The feminists have fought a successful battle on this issue, and now people are united in criticism of there only being 14% female representation in parliament. Our youths, however, are represented in general by less than 10% in parliament, and they constitute half of the population. The CHP should have at least 67 or 68 deputies under the age of 40. … We should all rise to the occasion and accept the fact that we need to get younger in the parliament.”

Erdemir had a well-prepared argument, citing a number of statistics. “When you look at our party council, which is composed of 60 people, there are only seven deputies under 40, which equals 8.5%. Our central governing council has 18 people, and only Safak Pavey is under 40 years of age there. What is worse, we now have only two deputies below 50 years of age, and that will fall to one by next year. For the AKP, their average age for the central governing council is 49.7. It is 56.7 for the CHP.”

Erdemir continued, “Our average age of all registered party members is 46.9. I wish that the party’s decision-making centers reflected this youth, but the average age of our caucus is 54.3. In other words, the caucus is at least 7.4 years older than the base of the party. The average age for our deputies is 55.5, and that means we are 8.6 years, at the least, older than our base. Put simply, we, along with the Nationalist Action Party (MHP), have the oldest members in parliament. The pro-Kurdish Peace and Democracy Party (BDP) members are the youngest, and the AKP is doing better than us. We nominated 1,167 candidates for the March 30 local elections. Only 158 of them were below the age of 40, giving half the population representation of 7.3% in the total. When you take the average age of all the [candidates] elected as mayors in all 81 provinces by all parties, it is 51.6. Taking the parties individually, BDP’s average is 44.5, AKP’s 50.9, MHP’s 55.4, and then we appear with the oldest candidates, with an average age of 55.7.”

Erdemir also spoke about his party’s candidate selection strategy. “Among the 1,167 candidates, we only had 23 below the age of 30, which is the internationally recognized age to be considered young. We put 17 of them in sub-provinces to run as mayor, and six of them in small towns, and they only won 1.43% of the votes in this election. The older generation approaches them with doubt, questioning their success. When you look deeper, however, it is a different story. Among the 17 sub-provinces where we ran these young people, the CHP actually received zero votes in five of them in the 2009 local elections. It received less than 1% in seven of these sub-provinces and somewhere between 1% to 3% in two of them. It only received more than 3% of the vote in three sub-provinces. In short, we placed these young candidates in areas impossible to win.”

Erdemir's assessment illustrates how disconnected the CHP is from the youthful energy of the country today, and how it is missing an opportunity to capture the support of the people at large.