Demonstrators defied the security clampdown on Istanbul, leading to waves of arrests and another challenge to the government of Turkish Prime Minister Recep Tayyip Erdogan. 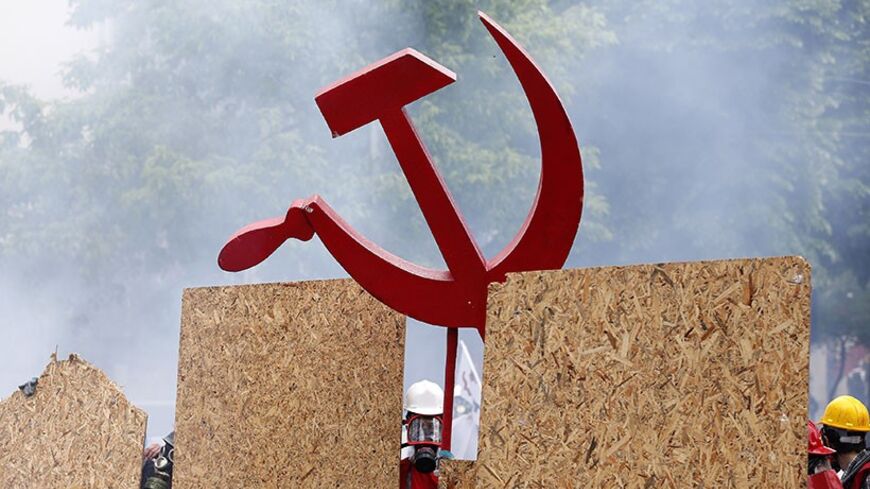 A protester holds a hammer-and-sickle sign as he and others shield themselves from police during a May Day demonstration in Istanbul, May 1, 2014. - REUTERS/Murad Sezer

Any foreigner setting foot in Istanbul on the morning of May 1 would find a deserted megalopolis. The dazzling city spanning Europe and Asia, connected by two suspension bridges over the Bosporus strait and an undersea metro, looked as if it were in a state of emergency.

May 1, International Labor Day, in Istanbul has been alarming for the Justice and Development Party (AKP), indeed. Prime Minister Recep Tayyip Erdogan has been paranoid since the Taksim Square/Gezi Park events of June 2013 about recurring use of Taksim Square for political protests, and he was determined to prevent it.

Taksim Square was the traditional May 1 celebration venue in Istanbul. Mammoth May 1 meetings took place there in the mid-1970s until the bloody events of May 1, 1977, when 34 people were killed and 136 injured. Pro-Soviet and pro-Chinese political groups clashed during the May 1 ceremonies, and a “third party” actually intervened and opened fire on hundreds of thousands of people that had massed at Taksim Square. Of these, 34 people were killed, some trampled by crowds, some hit by bullets. It has still not been determined who opened fire and, predictably, this incident, too, went down in history as an example of “deep-state provocation.”

May 1 observances at Taksim Square continued until 1980 with progressively smaller crowds. The junta government that took over with a coup in September 1980 declared Taksim off limits for public gatherings.

After the end of military rule, labor unions began to agitate for the return of May 1 observances to Taksim Square. There were occasional, low-intensity clashes. After Erdogan came to power, he continued keeping Taksim closed to public gatherings. Then May 1, 2008, became the most violent International Labor Day in the world.

There were severe clashes between the police and groups that wanted to march toward Taksim. On May 1, 2008, Istanbul became a city of shame where democratic rights were totally ignored. The sights of that day were similar to what we saw on May 1, 2014.

In May 2008, it had not yet been a year since the AKP took power with 47% of the vote. It was only a month and a half after the case was brought to the Constitutional Court to close down the AKP. Erdogan was under the pressure of threats of eliminating his party and banning him from politics. He was more than ready to see the May 1 incidents as a provocation directed against his power.

Only 48 hours after the devastation of May 1, 2008, I was with Erdogan at an unpublicized dinner at the residence of a civil society activist. We were sitting next to each other. Opposite us was then-Minister of Interior Bestir Antalya. The conversation drifted to the May 1 incidents incidents two days prior. I told them that their approach, just as their own party faced the threat of closure, was not rational, had led to widespread incidents and had shaken their legitimacy. I reminded them that the Taksim ban was one of the rulings of the 1980 military regime, and a political power that is determined to eradicate all the practices of the military regime could not support the May 1 Taksim ban.

Erdogan remained silent for a long while before responding with the reasoning: “I, too, demonstrated at Taksim in my youth. But Istanbul has changed so much since then. It is now global city. There are many foreigners in the city. Taksim is the center of the city. We enable them to go and come back from the center easily.”

It was a very meek justification. I answered, "Mr. Prime Minister, if we look at it from your perspective, what happened two days ago? Taksim was a like combat zone overflowing with police. There was no traffic. People could not get out of their homes. Foreigners coming out of hotels in the area were terrified and running around in panic. All these sights were aired by world television. If it became impossible for foreigners to access the city center because of a prevailing atmosphere of terror, it was on May 1.”

One year later, in 2006, the Erdogan government declared May 1 to be the national Day of Labor and Solidarity. Even more important, in 2010, Taksim Square was reopened as a public space for meetings and celebrations.

Erdogan proudly announced that he had abolished the Taksim ban as of May 1, 2010, and boasted about the AKP’s commitment to freedom. In 2010, 2011 and 2012, May 1 was observed at Taksim without problems and with the participation of tens of thousands of people. The reopening of Taksim for May 1 celebrations was promoted as a benchmark of normalization of Turkey and a major gain toward democratization.

In 2013, Taksim Square and its environs were dug up for a new look. Because of ongoing construction and the many deep holes on the site, there wasn’t much of a reaction to the security reasons given for not holding the observance there. Skipping the 2013 May 1 observance in Taksim was an accepted exception to the rule.

But after Taksim and the adjacent Gezi Park became the centers and symbols of the events of May-June 2013, Erdogan reinstated the Taksim ban and, more importantly, he did so as a show of power by the government. Since summer 2013, no public meetings have been permitted at Taksim and large police and security forces have become permanent features around the square.

As the date approached this year, Erdogan announced that May 1 would be not be observed at Taksim. He pointed to Yenikapi as the new venue for May 1 observance, a remote location in Istanbul where until now, only his party once held a meeting. He dismissed objections that he had no legal basis to close Taksim to May 1 and labeled demands to hold the meeting there as impertinence.

Various labor unions led by the left-wing Confederation of Revolutionary Labor Unions, civil society organizations and opposition parties as the Republican People's Party and the People's Democratic Party insisted on holding the observance at Taksim, emphasizing that this a legal, legitimate and democratic right.

It was foregone conclusion that May 1, 2014, in Istanbul was not going to be peaceful day and sadly, it was not.

On April 30, the governor of Istanbul announced that the metros, buses and ferries shuttling between the European and Asian coasts would not operate. It was clear that the commuting of millions of people, health services, airport access and everything else was going to be affected. The huge city woke up deserted and tense on May 1. All roads to Taksim were blocked by the police. Police riot-control vehicles equipped with pepper gas and water cannons were prominently deployed. There was no car traffic in the city, and pedestrians were sparse.

Clashes started around noon and lasted for hours in various parts of Istanbul between the groups that wanted to march toward Taksim and the police determined not to let them.

Some Turkish TV networks had deployed their cameras in strategic locations and provided live coverage of the incidents. Lawyer Turgut Kazan, a former member of the Istanbul Bar Association, told +1 TV that what was happening in Istanbul was a declaration of a state of emergency, but that this was a crime and violation of the constitution.

This article was written as the incidents were still going on, and as of 1:30 p.m. Istanbul time, hundreds of people had been detained and 152 wounded. These numbers will increase. We will need to wait a bit to get the true balance sheet of May 1, 2014, and its political ramifications. But you need not wait to say that May 1 is a measure of the democratic maturity of a country and according to it, Turkey has regressed in 2014.

May 1, 2014, in Istanbul (and elsewhere in Turkey where clashes are reported) may well be a “mayday” call for Turkish democracy.