This year's May Day protests in Istanbul are linked to opposition to a draft constitution by the Justice and Development Party, writes Yavuz Baydar. 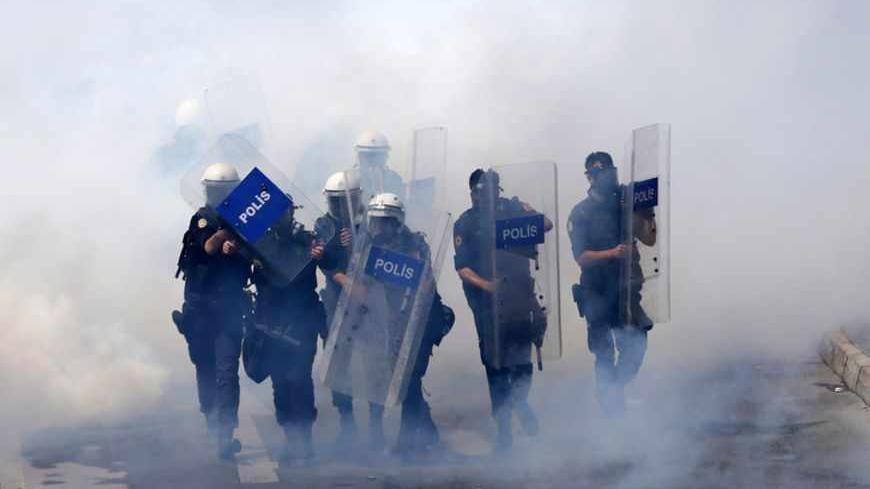 Riot police walk through a cloud of tear gas as they clash with May Day protesters trying to break through barricades to reach the main square in central Istanbul, May 1, 2013. - REUTERS/Murad Sezer

May 1 in Istanbul turned into a “Mayday!” for those who sought peace and harmony in the city amid pleasant spring weather. The light morning breeze carried pepper spray along the main streets and alleys leading to Taksim Square, turning the neighborhood and beyond, to the Golden Horn and Bosphorus, into a battlefield and forcing tourists as well as locals indoors.

The de facto state of emergency showed how thin the line is between finding a new mode of coexistence under a new, democratic constitution and ongoing mutual resentment and polarization. Scenes from the street battles, involving demonstrators from the leftist trade unions and clandestine Marxist groups, illustrate this situation, for which all sides are to blame to varying degrees. It is a case study in how being obstinate only leads to closed doors in a society that desperately seeks democratic closure.

Taksim Square has been the site of major construction and thus a center of bitter dispute. The work in progress is a radical project launched by the municipality, which is governed by the Justice and Development Party (AKP). The plan envisions narrowing the square's now-impressive space with the addition of a reconstructed, historic barracks and a massive shopping center. While many concerned locals view the project as the “architectural slaughter” of the beloved hub of the city, the leftist camp sees it as a pretext for closing the square permanently to May 1 celebrations.

The location is loaded with symbolism for Turkey's socialists. It was here that their political struggle became visible and bloodied with the massacre on May 1, 1977, when 34 people were gunned down and several hundred wounded in the ensuing rampage. This incident, attributed to actions by Gladio-type “deep state” dark forces, has never been sufficiently explained and lies behind the insistence of the socialist camp on assembling at the square every year.

Until a couple of years ago, leftists had to defy an official ban, which they blamed the AKP for maintaining. Yet, it was the AKP that in 2009 passed a motion to declare May 1 Labor and Solidarity Day. Thereafter, since 2010, the use of Taksim Square was allowed for May 1 demonstrations. This year, however, the construction project stood between the authorities and the trade unions.

In reality, all of Taksim Square is a construction site, full of holes and other hazards. Nonetheless, the May 1 organizers insisted on returning to the square. Istanbul’s governor proposed that they send a small delegation to lay a wreath and deliver a speech on the spot, but hold the main demonstration elsewhere. A few days before May 1, however, statements by Prime Minister Recep Tayyip Erdogan raised tensions, fueling rumors that the construction project was being used as a pretext for putting the square permanently off-limits for May 1 activities. Positions became entrenched, and the street battles began.

May 1 was celebrated peacefully elsewhere in Turkey, including in Diyarbakir. Events in Istanbul, with its population of 14 million making the city Turkey’s microcosm, only skim the surface. Rather, the fight for Taksim Square symbolizes how entrenched Turkey’s political lines have become. It reveals a country that while in the middle of resolving the decades-long Kurdish issue seems far from reaching consensus on a democratic constitution despite having now come so close.

The anger and defiance generated by the Taksim dispute will inevitably spill over into coming years. More important, however, it is an example of how every rift in Turkey, be it minor or major, can be exploited by the political camps. It also shows how difficult it is to overcome mistrust.

The question now is whether the persistent cleavages between the predominantly Sunni, post-Islamist, pro-reform AKP and the predominantly Alevite, secular and pro-republican groups consisting of leftists and Kemalists will be used to prevent further attempts to abandon the current constitution dictated by the military junta in 1980. The Kurds, mainly pro-Kurdistan Workers Party (PKK), stand somewhere between the two.

It is likely that the coming months will reveal the true nature of the cleavage. It may turn into a nationwide political battle to block or release energy for a new social consensus. In this sense, it is perhaps no coincidence that the rise in tensions overlap the desperate efforts of the parliamentary Constitutional Reconciliation Commission to reach agreement on a draft constitution. On April 30, the 12-member commission met to discuss its deadlock, only to postpone its final meeting until May 3. It will then deliver a tangible draft text or disperse.

It seems doomed to fail. The commission was given the go-ahead in early 2012, consisting of three deputies from each of the four parties represented in parliament. It initially inspired optimism — with members visiting city halls, gathering large amounts of data and polls, assembling proposals from non-governmental organizations and think tanks — but it became stuck not long after. Sharp differences of opinion, even concerning basic rights and freedoms, and repeated filibustering, slowed its momentum to a crawl and then paralysis.

By their deadline of Dec. 31, 2012, commission members had examined 150 articles, but only reached consensus on 28 of them. They could not agreement on the preamble or even on the main principles. They were also pitted against one another on the sections regarding the executive and the judiciary, with mistrust centered on whether the AKP will push through giving Erdogan extended powers, if and when he is elected president.

The opposition — the ultranationalist Nationalist Movement Party (MHP) and Kemalist Republican People's Party (CHP) — now propose an extension for the commission, arguing that a draft of such importance cannot be hurried. For the ruling AKP, this is merely an excuse to block the final farewell of a regime still ruled by a semi-military constitution. Further complicating matters, the Peace and Democracy Party (BDP), the political wing of the PKK, is demanding a brand-new constitution.

All of this highlights a watershed soon to be reached. Erdogan is well aware of how a solution to the Kurdish conflict, a major political reform, and a political timetable of three elections in a span of two years are linked. He knows that inaction before drafting a constitution will undermine his governance. He has to make fast, crucial decisions.

What comes next? It seems likely that the constitutional commission will be disbanded by the end of May, at the latest. AKP sources assert that there will be a major push to gain support for an AKP-signed draft in parliament. The AKP is short five votes of being able to push it through to a referendum by November. The “external” support it needs may come from the BDP, but the price would be steep, as that party now seems determined to reject a draft that includes a presidential system with expanded powers.

Will it clear the way for a more democratic Turkey? Doubts weigh heavily. Everything depends on whether the key player, the BDP, and the small group of reformists in the CHP will rise to the occasion to craft a reasonable draft, with an emphasis on ensuring proper checks and balances and a modern secular model. The threshold comes with immense challenges.

Yavuz Baydar is a contributing writer for Al-Monitor's Turkey Pulse. His opinion pieces can also be followed in the English-language daily Today's Zaman.