The genuine fear in Turkey is that the Republican Peoples’ Party (CHP) now stands as an impediment to formation of a credible alternative on the left. 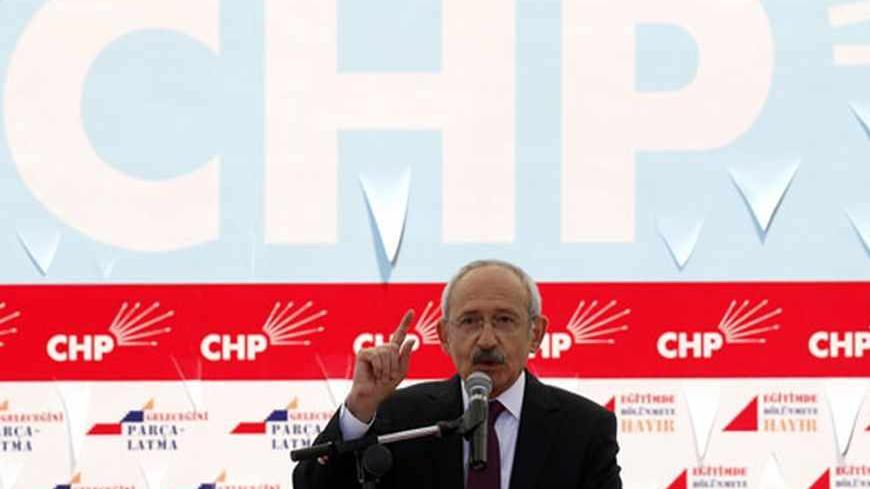 A recent political scandal in Brussels has demonstrated that Turkey’s domestic tensions have now spilled overseas, raising internationally the questions asked daily by Turks eager for an alternative to the Justice and Development Party (AKP).

The scandal unfolded when the leader of the Kemalist Republican Peoples’ Party (CHP), Kemal Kilicdaroglu, went to Brussels to meet with Hannes Swoboda, the head of the Progressive Alliance of Socialists and Democrats, the second largest group in the European Parliament.

At a press briefing ahead of the meeting, Kilicdaroglu compared Turkey’s premier to Syrian leader Bashar al-Assad when commenting on the terrorist attack in Reyhanli. “Recep Tayyip Erdogan is the murderer of the 51 victims in Reyhanli,” he said. Swoboda reacted harshly and requested a “correction.” When Kilicdaroglu failed to meet the request, the Austrian politician refused to meet him, turning away the CHP leader from the door.

“I asked him to clarify that he did not mean to make a direct comparison. We agreed on that. But then one of his advisers said they could not issue that statement. I responded that in this case we have nothing to talk about,” Swoboda said.

Kilicdaroglu, meanwhile, claimed he was the one to cancel the meeting. “I would never meet with someone who does not recognize freedom of expression. No Westerner could teach us democracy lessons,” he added.

Swoboda, for his part, said, “If you are a guest to a family, you have to respect the rules of that family. You cannot make declarations contrary to the spirit of the family.” He went on to also criticize the CHP’s political attitudes: “If the CHP wants to be part of social-democratic values, it has to embrace those values. Why is this party not at the forefront of the Kurdish problem and similar issues? I expect them to respect our values, otherwise we have nothing to share. I’m committed to moral standards. If he is not, he is not supposed to come here.”

For two leaders who are “comrades” in the Socialist International, this slanging match was way too serious. The essential problem is concealed in the derogatory sense Kilicdaroglu attributes to the word “Westerners.”

Is the CHP going to remain a “local” party with its current leader and administration, or will it embrace universal leftist values to become a democratic balance factor and an alternative to the AKP, which is governing Turkey with excessive powers?

The crisis is the signal flare of a deepening predicament for secular, leftist and pro-Republican liberal Turks who have long voted grudgingly for the CHP or abstained from voting despite their inclinations. A significant part of the leftist front is furious with the party’s instinctive reactions and shallow high-pitch objections, its propensity to nurture fears rather than hope and its failure to come up with solution policies to boost its popularity. A MetroPOLL survey, for instance, indicates that two-thirds of CHP voters back the Kurdish peace process.

In a Turkey governed under a single-party supremacy, many analysts believe that the CHP’s tattered “schizoid” attitude keeps the left’s alternative politics paralyzed.

A politician of Alevi-Kurdish origin, Kilicdaroglu was elected party leader in 2010 to succeed Deniz Baykal who quit over a videotape scandal. But the optimism he brought along survived only several months. Despite grassroots support, he failed to move away from the conservative, "statist" line.

He opted for a short-term self-centered strategy to retain his post by capitalizing on the in-house feud between rival cliques within the party rather than pursuing a strategy to steer the CHP from its infertile, obsolete Kemalist course to a reformist social democracy.

Torn between the bickering cliques, he lost his ability to run the party; instead the destructive in-house feud came to run him. His poor oratory skills contributed to his posture of defeat. In the face of Erdogan’s oratory supremacy, he ended up with the widespread image of a “political dwarf” biting off more than he can chew.

Undoubtedly, the misgivings are not limited to the CHP or its chairman. Like the infuriated Swoboda, those at home and abroad who see the urgency for reform and the staggering of the “normalization” process in Turkey, including social liberals and Democrats in Washington, have come to realize that the CHP’s share of responsibility is not to be underestimated.

Instead of being the source of solutions, the main opposition — with all its ambivalence and zigzagging — has become another of the country’s problems that call for a solution.

Since 2010, the CHP’s performance has been a chain of disappointments. During the referendum on a partial constitutional reform, the party opted to be obstructive instead of advocating broader rights and freedoms. For years, it has failed to openly take any responsibility for the solution of the Kurdish problem. The CHP has always shaped its positions according to potential AKP errors but has been mistaken. With Erdogan keeping his electoral strength, the CHP has sought remedy in offensive verbal skirmishes but that, too, has failed to bring it more votes.

The current stage is one of absolute deadlock. The apprehension has spread not only to Brussels and beyond but also into the CHP’s inner fabric. The party’s cliques are at loggerheads, and none of them is happy with Kilicdaroglu — not the traditional Kemalists, the nationalist leftists or the reformists.

It is evident that some CHP lawmakers have aligned with the militarist-leftist Labor Party on the ground.

A small — but critical — number of about 15 pro-reform CHP lawmakers are deeply irked by the party’s stance in favor of the status quo with respect to the Kurdish peace process and efforts for a new, democratic constitution.

The fact that they put their signatures on a recent democracy manifesto by a group of social democrat and leftist activists might have brought the CHP to the brink of splintering.

Since the party cannot go on like this, who is going to win in the end? Which faction is going to prevail? The answer, sought by Swoboda, too, is likely to take time. Incapable of shrugging off its statist propensity, the party’s nomenclature sees the CHP as a source of personal gains, fortunes and revenues — and it is fond of crises. This, in turn, keeps stoking Turkey’s crises.

Yavuz Baydar is a contributing writer for Al-Monitor's Turkey Pulse. A journalist since 1979, he has been a radio reporter, news presenter, producer, TV host, foreign correspondent, debater and, in recent years, a news ombudsmen for the daily Sabah. His opinion pieces can be followed in the English-language daily Today's Zaman. Baydar also contributes as a frequent commentator for BBC World, Swedish Radio-TV, NPR, Russian TV and Al-Jazeera.