The politics of the Turkish-Kurdish peace initiative are just beginning to play out for Turkish Prime Minister Recep Tayyip Erdogan. 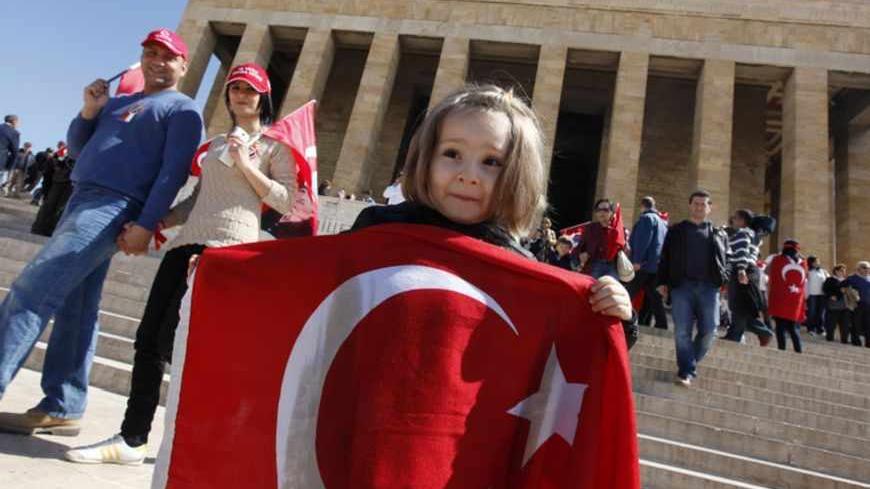 A girl holds a Turkish national flag as she visits the mausoleum of Mustafa Kemal Ataturk, founder of modern Turkey, during a ceremony to mark National Sovereignty and Child's Day in Ankara, April 23, 2013. - REUTERS/Umit Bektas

Sticking to its promises, the Kurdistan Workers Party (PKK) appears to have started pulling out from Turkey as agreed with Ankara. At least 50 militants are said to have crossed into Iraqi Kurdistan since May 8.

The process, however, is just starting. The statements made by Prime Minister Recep Tayyip Erdogan in late December and by PKK leader Abdullah Ocalan in March were only preliminary messages. The doubts are over. According to confidential information, the approximately 2,500 PKK rebels in Turkey will complete their withdrawal — armed or unarmed — sometime between Aug. 15 (the day PKK launched its armed rebellion in 1984) and Sept. 21 (World Peace Day).

There is nothing surprising here. No matter what, the political pair guiding the peace process, Erdogan and Ocalan, have “shaken hands from a distance.” Since they have both invested their popularity and clout in it, the progress should be taken seriously.

It is even more important to note that the more the settlement effort deepens, the more the door will close on the dark history which the sides want to leave behind.

Some in Ankara may be sighing relief, but the pile of files on the negotiating table is growing as much as the PKK vacates the field.

Part of the agenda pertains to neighbor politics. Iraq was quick to declare that the entry of PKK militants into the country was unacceptable. The Iraqi reaction overlaps with the attitude of Iran, which has not only raised similar objections but also offered the PKK military support to dissuade it from exiting Turkey.

Thus, Iraq and Iran are likely to be the essential realms of friction and jeopardy in the next stages. The prerequisite in dealing with this risk is to boost confidence between Erdogan and Ocalan and Ankara and the PKK.

Even though the Turkish army does not oppose the process and the past four months have been free of bloodshed and violence, Turkey remains clearly hesitant, both socially and politically. The cautious hope is clearly reflected in two recent, little-publicized opinion polls (KONDA, MetroPoll).

Public support for the process stands at 50%-60%. The details indicate three quarters of Turks favor political dialogue over military means, but once Ocalan is mentioned in the questions the ratio falls abruptly to 30%-40%. (Recent polls meanwhile indicate that while support for the ruling Justice and Development Party (AKP) remains at around 50%, the popularity of the far-right Nationalist Movement Party (MHP) has jumped by 1 to 1.5 percentage points in each of the past two months).

This sentiment reflects the fact that the process has been advancing on a strange course, alternating between the orderly and the disorderly. The meetings that the government-created delegation of 63 “wise men” has held with the public demonstrate that Erdogan needs to address the fundamental doubts as clearly as possible.

The “wise men” were relatively comfortable in wooing support in the Kurdish-majority east, but the climate grew stormy as they travelled west. The prevailing doubt among Kurds is whether Ankara will “once again deceive” them about reforms on rights and freedoms. The Turks, meanwhile, are haunted by deeper misgivings on whether the country will “ultimately break up like Yugoslavia.” It is a double-edged sword.

If confidence between Ankara and the PKK is one of the prerequisites for success, establishing trust between the government and the public is obviously another.

In remarks on CNN Turk television, conflict resolution expert Huseyin Yayman, a respected member of the “wise men,” spoke of a serious problem of transparency and public relations. The government, he suggested, needs a spokesperson to regularly brief the public. The problem, he added, stemmed also from the fact that only a “very small” circle in Ankara was in the loop.

The fact that the mention of Ocalan makes adverse impact on public response is a serious problem. This reaction is largely the result of years of efforts by the government and pro-government media to demonize Ocalan as the head of a “PKK rebellion” that has claimed more than 40,000 lives in nearly three decades. This certainly does not preclude that many in Turkey and abroad are aware of the “cult” of Ocalan, his Stalinist clichés and bloody record.

The essential problem here is how to manage not Ocalan himself but rather his public image as a “monster” so that the process can reach its ultimate objective of persuading the PKK to lay down arms and embrace peaceful politics.

If a “road accident” is to occur due to mismanagement, this harsh sentiment is likely to badly harm the process and even paralyze it.

An even greater challenge concerns national politics itself.  Now that the withdrawal has begun, will Erdogan undertake reforms on a corresponding scale? When, how and with whom?

The Peace and Democracy Party (BDP), the PKK’s political wing, and its Kurdish voters are awaiting an answer.

Short of gainful arguments against the truce and the pullout, the Kemalist opposition Republican People’s Party (CHP) and the MHP are watching out not only for mistakes in the process but also for reform moves, hoping to get ammunition to fire.

The government and parliament are under pressure also by civic society which sees the process as an opportunity for far-reaching democratization. A group of 111 social democrats and socialists have issued a declaration recently, demanding that the process be synchronized with overall democratization reforms.

The signatories of the declaration included 15 CHP lawmakers who support the peace process. If the rift inside the CHP grows, Erdogan may find room to revive hope and make surprise moves on his aspirations to complete the process with a new constitution that would cater to his own political agenda.

Erdogan and Ocalan want the process to move on a fast track. This means that Turkey is bracing for a summer vulnerable to the high tensions accumulated in the political layers of the process.

Yavuz Baydar is a contributing writer for Al-Monitor's Turkey Pulse. A journalist since 1979, he has been a radio reporter, news presenter, producer, TV host, foreign correspondent, debater and, in recent years, a news ombudsmen for the daily Sabah. His opinion pieces can be followed in the English-language daily Today's Zaman. Baydar also contributes as a frequent commentator for BBC World, Swedish Radio-TV, NPR, Russian TV and Al Jazeera.