Turkey Should Acknowledge The Armenian Genocide

Yavuz Baydar writes that Turkey should get ahead of the 2015 centennial commemoration of the Armenian genocide by acknowledging it, which would be a game-changer in Turkish politics. 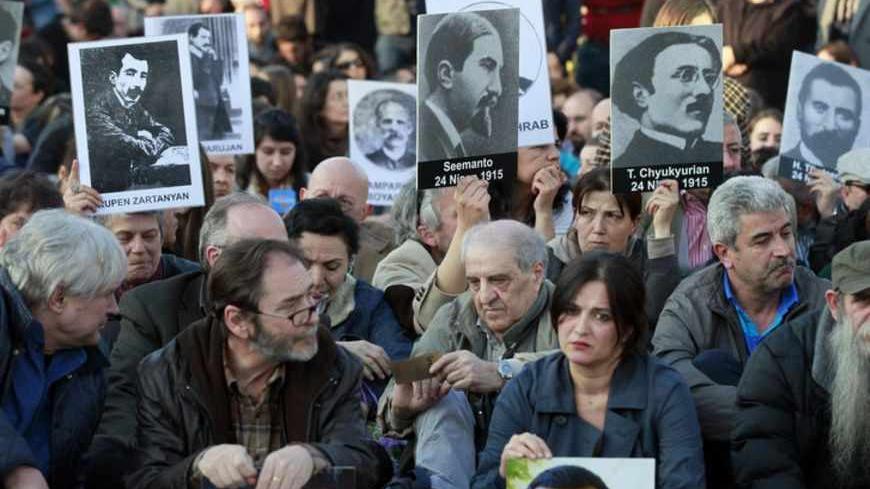 Human rights activists hold up pictures of Armenian victims at Taksim Square in central Istanbul, April 24, 2013, during a demonstration to commemorate the 1915 mass killing of Armenians in the Ottoman Empire. - REUTERS/Osman Orsal

Every year passing, they are more in number. When Turks began commemorating April 24, 1915 — the day symbolizing the mass deportations and annihilation of Ottoman Armenians — four years ago in Istanbul, those who attended the gathering were around 700. Yesterday, in six cities, more than 3,000 were present.

This time the organizers — "Dur De," the anti hate-speech campaign and various human rights groups — were joined by a large foreign delegation comprising 20 anti-racist and Armenian representatives from 15 countries, including the Armenian General Benevolent Union (AGBU), Young Professionals from Bulgaria, the "Roma Center" in Romania, and the European Grassroots Antiracist Movement (EGAM).

There were some clashes in İzmir and small disturbances in Istanbul, but the police were determined that the events take place safely, protecting the mourners.

The April 24 gatherings this year overlapped with the large mobilization nationwide to end the 30-year Kurdish conflict, adding an extra dimension. In many ways, Turkey’s glasnost since 2002 unleashed dynamics that seem irreversible.

With the genies of the country’s oppressive past out of the bottle, the push forward to a confrontation with the truth has now a continuity, bringing along promises — however faint — of a closure.

One of the most striking sayings given birth by Turkish glasnost was, "In this country, Armenians have desperately been trying to prove that they were killed and gone, while its Kurds are desperately trying to prove that they exist; that they are alive." It tells of a hidden past, an episode of looting and extermination, which the rulers managed to sweep under the carpet, keeping an entire nation under mass hypnosis for decades. The same went for the denial of the Kurdish identity, which has led to numerous bloody uprisings.

Yet, the bitter truth has crept in, as it usually does, in its own obstinate ways. The existence of the Kurds — around 14 million, according to a respected pollster, KONDA — pushed their cause to the current peace talks, demolishing all the taboos left on the subject.

The Armenian question has had to take a tougher path: It began slowly to enter the awareness in late 1970s and has built up since 2002, as the AKP took over, accelerating with Turkey’s EU membership process. It was carried through by a tiny, but bold group of intellectuals in the media and academia, later by growing numbers of NGOs by way of conferences, memoirs, networks, books and collections of oral history.

The heinous assassination of our colleague, Hrant Dink, in January 2007, only helped to raise the issue higher in the national agenda; waking up the conscientious portion of the pious, bringing them into the debate over the pitch-black episodes of the late Ottoman history.

Curiousity about the subject has risen, as books by well-known Armenian and international genocide scholars were published; and a new generation of Turkish researchers were now busy digging in the various dimensions. The challenge to the official denial has become real.

Yet, today, in the immediate aftermath of April 24, 2013, the question is not how much closer the Turks have advanced toward the truth, but whether or not the Turkish state is ready for any acknowledgment of past wrongdoing.

Despite the fact that many in the media — including myself — have been gently, but resolutely warning Ankara that the 100th anniversary of the Great Armenian Tragedy (Aghet), the mass-deportation in 1915 that in the end turned into a genocidal act, presents not a threat but a great opportunity to confront the truth, by an apology, both over the act itself, and over the decades-long, categorical, obstinate denial.

In this sense, needless to say, the social progress is ahead of the official sphere. But, all the work on memory and NGO work, and April 24 anniversaries will not cut it. As the clock ticks, the world will be watching what Ankara’s response to the expectations will be.

An important dynamic is stuck between Turkey and its ally, the US. Every April 24, Ankara lends a nervous ear to what the US president will have to say about the matter. The only focus is on whether the g-word will be uttered, or not.

Every year the sigh over the absence of it looks like more than an apology is issued by Ankara. It has turned into a farce, a painful wordplay.

The famous absence continued again this year. President Barack Obama, very real-politik conscious, avoided the term genocide, but actually went beyond, when he mentioned ‘those who perished in one of the 'worst atrocities of the 20th century.'"

“We pause to reflect on the lives extinguished and remember the unspeakable suffering that occurred. In so doing, we are joined by millions across the world and in the United States, where it is solemnly commemorated by our states, institutions, communities, and families. We also remind ourselves of our commitment to ensure that such dark chapters of history are not repeated,” he said.

He also implicitly urged Turkey to face its past and acknowledge painful elements. “Nations grow stronger by acknowledging and reckoning with painful elements of the past, thereby building a foundation for a more just and tolerant future.”

It has not taken a long time before Ankara responded based on a well-known template, reacting strongly against Obama’s statement.

It read: "US President Obama has unfortunately demonstrated this year once again a one-sided approach which reflects the Armenian views regarding the dispute between Turks and Armenians on the painful part of their common history. We regard this statement, which distorts the historical facts, as problematic in every aspect and deeply regret it. … Such statements damage both Turkish-American relations, and also render it more difficult for Turks and Armenians to reach a just memory."

The current version of annual American-Turkish exchange offers the following interpretation: While the American side stays at the same level in its frustration at Turkey’s denial, the new element in the Turkish statement is the term "just memory."

It means the following: Realizing the inevitable fact of the tragedy of the Ottoman Armenians and the role of the ruthless Turkish nationalist military command of that era, Ankara is now busy preparing for 2015 on the premise that World War I caused an an immense trauma to the Muslim subjects of the Ottoman Empire, which it will push the Armenians today to acknowledge.

Of course, it will be perceived by the latter as a new attempt to equalize the huge suffering of unarmed civilians with the suffering of warriors.

The strategy of Ankara is already obvious. But it is highly doubtful that it will be a game-changer for 2015. One can already take it for granted that the ghosts of the past will not change their lamenting choreography.

Yavuz Baydar is a contributing writer for Al-Monitor's Turkey Pulse. A journalist since 1979, he has been a radio reporter, news presenter, producer, TV host, foreign correspondent, debater and, in recent years, a news ombudsmen for the daily Sabah. His opinion pieces can be followed in the English-language daily Today's Zaman. Baydar also contributes as a frequent commentator for BBC World, Swedish Radio-TV, NPR, Russian TV and Al Jazeera. A former president of the World Organisation of News Ombudsmen, he is a member of the World Editors Forum, the Committee of Concerned Journalists and the UNESCO National Committee of Communications.