The Turkish authorities have arrested dozens of protesters for violating a ban on May 1 demonstrations at Istanbul’s Taksim Square. 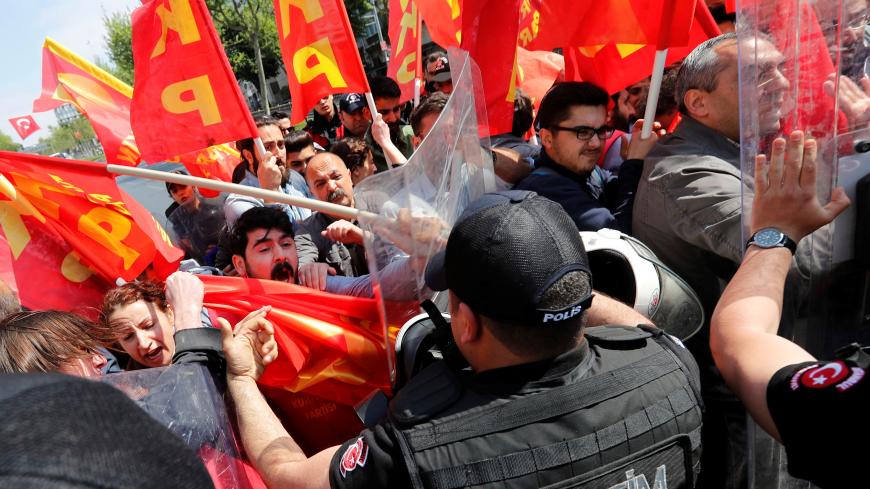 Turkish riot police scuffle with a group of protesters as they defy a ban and march on Taksim Square to celebrate May Day, Istanbul, Turkey, May 1, 2018.

Turkish police detained 77 people who defied a ban to mark May Day at Istanbul’s Taksim Square, the traditional protest site that still remains contentious four decades after dozens of leftists were killed there during May Day celebrations.

Authorities deployed more than 26,000 police officers around the city, cordoned off Taksim Square with metal barricades and suspended public transit and traffic on roads leading to the key transport hub to prevent marchers from reaching the space. Helicopters patrolled the skies above the square.

The extraordinary measures underscore President Recep Tayyip Erdogan’s determination to keep a lid on potential unrest ahead of elections to be held June 24 under the continuing state of emergency. The historic vote, which Erdogan pulled forward by 17 months, will usher in constitutional changes that will vastly expand the powers of the president and formally sideline the parliament.

Hundreds of tourists struggled to reach hotels or leave for the airport from Taksim, a major tourism center, reported CNN Turk, showing footage of them dragging suitcases past riot police.

A handful of labor group representatives were allowed to hold moments of silence in Taksim early in the day. A pro-government union left a wreath at a statue of Mustafa Kemal Ataturk, the founder of the modern republic, and carnations nearby to commemorate the 37 people who were killed in 1977 after unidentified gunmen opened fire on a crowd estimated at 500,000 people, sparking a panicked stampede.

Thousands of workers gathered at a rally on the city’s Asian side that was organized by left-wing unions after their request to gather in Taksim was denied again this year. Smaller events were held in cities across Turkey.

“In 15 years, we have striven to resolve problems regarding our workers’ rights and laws with as much of the resources of the state and the country as possible,” Erdogan said in an International Labor Day message.

“We have come together with all labor unions and civil society organizations whose real agenda is workers’ rights and benefits,” he said. “We have taken care not to be one of those who instrumentalize workers and laborers on such a meaningful day as May 1.”

Workers face a myriad of problems in Turkey, including one of the world’s highest worker fatality rates, a lack of legal protections and dwindling union membership. Almost 400 workers were killed on the job in the first three months of this year alone, according to the Workers’ Health and Work Safety Assembly. The International Trade Union Confederation ranks Turkey among the 10 worst countries for workers’ rights.

Just one in eight workers belongs to a trade union. The official unemployment rate is above 10% despite rapid economic growth, and low wages have left millions of workers at the hunger threshold.

Since the chaos of 1977, Taksim Square has been mostly off-limits to those wanting to draw attention to these issues. Then, in 2010, Erdogan designated May 1 a national holiday and relaxed the prohibition on gathering at Taksim, part of wider liberalization efforts earlier in his rule.

May Day celebrations were held at Taksim without incident the following two years, bolstered by a 2012 European Court of Human Rights ruling that Turkish authorities had violated their right to peaceful assembly with their earlier prohibitions.

Then, the ban was reinstated in 2013 due to security concerns arising from a controversial construction project at Taksim Square, viewed by many Turks as the symbolic heart of the secular republic. The decision sparked protests that snowballed into Turkey’s largest anti-government demonstrations in a generation as tens of thousands of people occupied the adjacent Gezi Park, a rare green space in the city that was slated for demolition to make way for a shopping mall. At least eight people were killed and thousands were injured over two weeks as police suppressed the protests and finally cleared the park.

Erdogan likened the protests to a coup attempt. Three years later, he faced down an actual military coup and has ruled Turkey largely by decree since imposing emergency rule in its aftermath.

Gezi Park survives, despite occasional threats by Erdogan to destroy it, while the rest of Taksim is undergoing an extensive transformation. Behind Ataturk’s statue rise construction cranes and the domes of a great mosque, the realization of an elusive dream of Turkish Islamists since the 1950s to build a house of worship in the square.

At the same time, the Ataturk Culture Center, a modernist building erected in 1969 that straddles the eastern end of Taksim, is being dismantled. Erdogan shut the landmark down a decade ago and now plans to replace it with an opera house. Last year, he hired the son of the cultural center’s original architect to design the new building.

The rest of the square is encased in concrete with a few potted trees and benches. On Tuesday, it stood empty.