Turkey’s sale of Iraqi Kurdish crude oil could backfire for Ankara and the Kurdistan Regional Government. 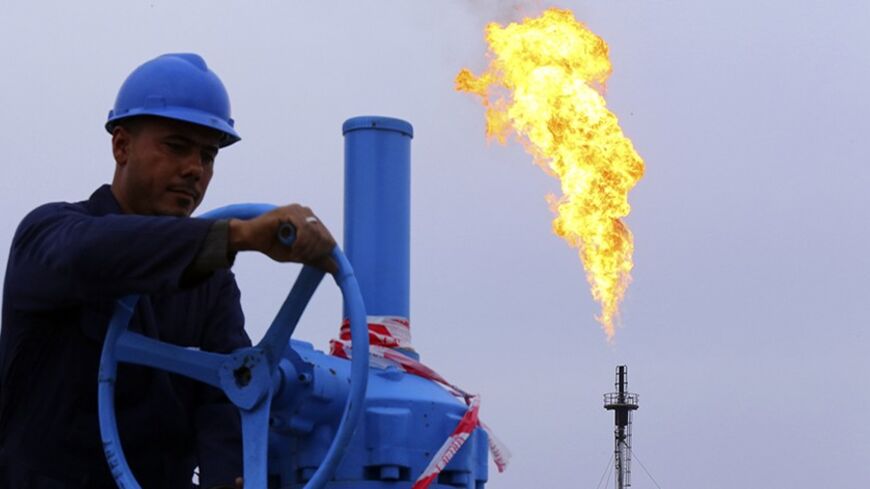 A worker adjusts the valve of an oil pipe at Khurmala oil field on the outskirts of Erbil, Dec. 4, 2013. - REUTERS/Stringer

Rather than assume regional leadership and help resolve the oil dispute between Baghdad and the Kurdistan Regional Government (KRG), Turkish Prime Minister Recep Tayyip Erdogan has done just the opposite. Ankara’s sale of Kurdish crude without Baghdad’s authorization — with revenues to be deposited in a Turkish bank — may pressure Iraqi Prime Minister Nouri al-Maliki, give Turkey access to cheap Kurdish crude and provide much-needed revenue to the KRG. Yet, it has unleashed a legal and political backlash in Iraq. Erdogan’s goodwill gesture toward the Kurds has also deepened the polarization between Baghdad and Erbil without resolving the KRG’s current revenue crisis. The KRG remains in financial limbo, dependent upon both Ankara and Baghdad, and still in need of a grand bargain that can permit large-scale, risk-free exports through the northern corridor.

Although Ankara’s sale of Kurdish crude has not fundamentally reshaped regional energy markets, it reveals the extent to which Erdogan and the KRG are willing to defy and pressure Baghdad. The timing of the sale was no coincidence. It not only followed months of a budget dispute between Erbil and Baghdad, but the Iraqi elections that left Maliki with a plurality of seats although an insufficient number to form a government. Ankara and Erbil may either seek to force an energy deal from Maliki in return for Kurdish support or assure that Maliki does not reassume the premiership. For the KRG, the sale also reflects a highly salient oil nationalism that has become embedded in its political agenda and society, and the ongoing efforts to gain economic autonomy from Baghdad.

Yet, this tactical move may not necessarily lead to desired outcomes. At minimum it has exacerbated an already tense negotiating climate. As expected, Baghdad immediately filed litigation against Ankara and its state-run pipeline operator, Botas, at the International Chamber of Commerce (ICC) in Paris for violating the 2010 Pipeline Tariff Agreement (functioning and amended since 1973) and the 1946 Friendship Treaty between Iraq and Turkey. The Iraqi federal court also has filed a complaint against the KRG. Legal uncertainty is reinforced by the executive order announced by President Barack Obama on May 27, ending immunities to the Development Fund for Iraq and certain other Iraqi property and interests, which leaves Kurdish oil exports unprotected from attachment claims, at least in theory. Litigation could go on for months, if not years, perpetuating legal risks and uncertainty for future large-scale exports as well as political distrust between Baghdad, Ankara and Erbil.

It is also uncertain if small-scale, legally contentious oil sales can meet the KRG’s revenue needs or leverage Maliki. According to an analysis by Bank of America Merrill Lynch Global Research, KRG oil sales might only partially compensate for the financial losses from Baghdad. The study said that under the current payment system, the KRG would need monthly sales from 20 tankers holding a million barrels of oil each to gain proceeds of $340 million; this represents only 25% of the KRG's monthly budgetary appropriations from Baghdad. Kurdish leaders have secured loans of over $450 million from local businessmen that they plan to repay with crude oil; however, large-scale financing to substitute for Baghdad’s revenue cuts is still unavailable.

Even though the KRG plans to increase export volumes and sales to offset Baghdad’s payment gap, technical issues prevent this option in the short and medium term. Because the two pipelines that comprise the Iraqi Turkish Pipeline (ITP) cannot function simultaneously, the KRG’s export line (which has blocked access from the Iraqi side) can continue to transport crude as long as the second line is not functioning. Coordinating pipeline use has thus far not been an issue since the line on the Iraqi Arab side has been attacked and in disrepair over the past few months, leaving the KRG free to use its portion of the line. Usage and coordination issues could become a problem if and when the other line starts to function again.

Thus, to maximize the potential of both lines simultaneously, Baghdad and Erbil will need to reach a compromise on pipeline sharing. The KRG has ordered additional pumps to enable exports independently of the other line, but these are not expected to be in place for another six to nine months. Even then, the portion of the ITP that the KRG now controls has the capacity to export about 500,000 barrels per day, if fully repaired and functioning. Any additional volumes to be exported from Iraqi Kurdistan to Turkey would require coordination with Baghdad to use the other part of the ITP, and/or constructing another line entirely, and building necessary storage facilities.

Turkey’s sale of Kurdish crude also has implications for Iraq’s internal stability and negotiating a long-term revenue-sharing agreement. Although the oil and revenue dispute has been framed as a conflict between Kurdish leaders and Maliki, it extends to other Iraqi Arab provinces as well. Some Arab Iraqi officials, including Mosul governor Atheel al-Nujafi, argue that the KRG has the right to export given Baghdad’s failure to pay salaries, as long as the revenues are used for all Iraqis. Other leaders and populations are critical of what they perceive as unilateral action by the KRG, and its privileged position. The southern oil-producing provinces have criticized the KRG’s revenue payments as unfair, while pressing Maliki to either prevent Kurdish exports or offer them similar rights. These demands limit what Maliki can offer the KRG without setting a precedent that will require similar concessions to other provinces. These competing revenue claims also fuel the problem of consensus building.

Under the current conditions, Turkey and the KRG may continue to export and sell small amounts (100,000 bpd) of Kurdish crude. Yet, this gamble with Baghdad could backfire or at least reinforce red lines that need to be softened to move forward with much-needed compromises on all sides. Certainly the problem is an internal one between Baghdad and Erbil, but Ankara remains an essential actor that can either be a stabilizer or a spoiler in this affair.