Differences over Egypt and Syria are far from resolved, despite some feints at strengthening regional cooperation. 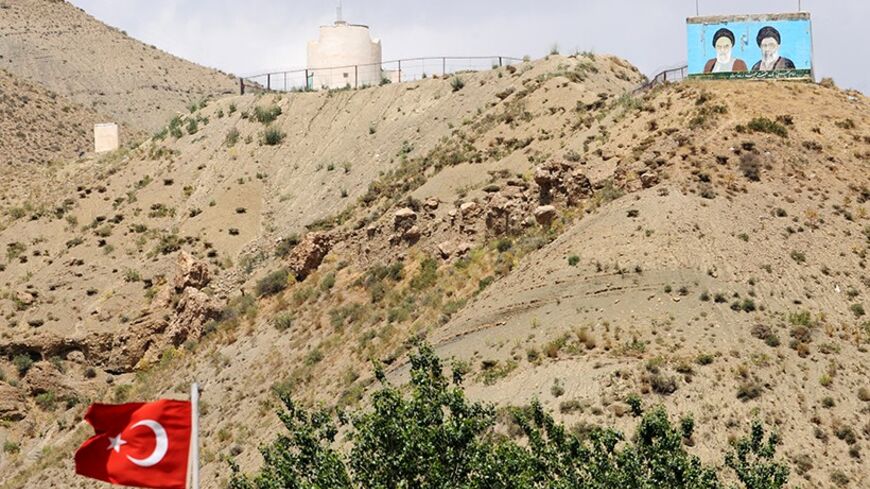 A billboard with images of two Iranian supreme leaders — the late Ayatollah Ruhollah Khomeini (L) and Ayatollah Ali Khamenei (R) — is seen on a hill from the Turkish side of the border near the Esendere crossing between Turkey and Iran, June 25, 2012. - BULENT KILIC/AFP/GettyImages

Given the scope of the crisis in Syria, Iraq and throughout the region, one might hope that the relatively stable regional powers of Turkey, Iran and Saudi Arabia would find a way to work together before the situation goes from bad to worse.

Such an expectation, however, is wishful thinking, as these three powers, far from cooperating, are vying for regional influence and contributing to instability in the region along sectarian lines.

Of course, on the surface it is business as usual between Turkey and these two countries, with niceties even being exchanged. For example, Turkey’s ambassador to Tehran, Umit Yardim, told the Tasnim news agency in a recent interview, “Turkey and Iran are two major players not only in the Middle East but also beyond this region.” He went on to add that these are the two main powers that can put an end to the current situation.

Exchanges of high-level visits between the two countries have not lapsed. Turkish Prime Minister Recep Tayyip Erdogan visited Tehran in January and Iranian President Hassan Rouhani is slated to visit Ankara in the near future to “further enhance ties.”

Meanwhile, trade between Turkey and Iran, despite US sanctions and pressure from Washington, continues apace and currently stands at over $20 billion a year, with the sides trying to raise this figure over $30 billion.

But this is the Middle East, where surface appearances are often at odds with what lies below. This is why reports of an attempt by bitter rivals Saudi Arabia and Iran to start a conversation, even if the prospects for full rapprochement appear remote at the present, must also be taken with a pinch of salt.

Turkish-Iranian ties prior to the Arab Spring appeared set to continue on a positive trajectory as political cooperation between the Erdogan government and Tehran increased after the Islamist Justice and Development Party (AKP) came to power in Turkey. These ties peaked when Turkey, together with Brazil, got Iran to accept a deal in May 2010 for its enriched uranium stocks in what appeared to be a breakthrough in reducing rising tensions between Iran and the West.

That deal was eventually rejected by the United States, but it nevertheless contributed to increased political dialogue between Ankara and Tehran until the advent of the Arab Spring. Iran looked at the mass demonstrations across the Middle East as a Western-inspired conspiracy against the Islamic world. The Erdogan government, however, saw it as an opportunity for a more democratic Middle East led predominantly by the Muslim Brotherhood.

The real break between Ankara and Tehran came over Syria. The Erdogan government opposed the regime of President Bashar al-Assad from day one of the uprising, while Iran backed it, just as it continues to do today. With the conflict gradually turning into a civil war along the Sunni-Alawite divide, Syria also became the battleground for a proxy war between Ankara and Tehran as the two countries armed and supported rival Syrian groups.

Assad’s ability to remain standing with Iranian help and the very real possibility emerging that he may prevail has not helped the mood between Ankara and Tehran, despite the diplomatic niceties being exchanged for pragmatic reasons.

Meanwhile, Iran became the unquestionable leader of the region's Shiites and Alawites as a side product of the Arab Spring, and its foreign policy today is based largely on maintaining and promoting this position of influence.

The Erdogan government’s foreign policy toward the Middle East, on the other hand, became increasingly Sunni-oriented as the Arab Spring soured and drifted away from its original drive for democracy and freedom for the masses.

This division alone inevitably puts Turkey and Iran in opposing camps in the regional Sunni-Shiite cold war that has emerged, and which continues to also be fueled today by the sectarian animosity between Saudi Arabia and Iran.

It is clear that while the Erdogan government’s aim is to support and promote Sunni influence, especially by means of the Muslim Brotherhood, Tehran is trying to prevent this, whether in Syria or in Iraq. Under normal circumstances, this situation should have pushed Turkey and Saudi Arabia, the two major Sunni powers, closer together.

But such assumptions are misplaced in the Middle East, and what we have between Ankara and Riyadh today is what Al-Monitor’s Abdulmajeed al-Buluwi has referred to as a “Sunni-Sunni conflict.”

In his April 1 article, Buluwi points out that the recently adopted Saudi anti-terrorism laws — which also ban the Muslim Brotherhood as a terrorist organization — are also designed to limit the influence of outside actors on local Sunni communities that are pushing for more democracy. Buluwi states: “Turkey's AKP government is considered the main sponsor and supporter of political Islamic movements in the region. Riyadh resents this, as it sees Islamist movements as a threat to regional stability.”

So while Iran resents Turkey’s backing of Sunni powers and groups, Saudi Arabia resents Ankara’s support for certain other Sunni groups, especially the Muslim Brotherhood and those affiliated with it, who promote the kind of political Islam that has the potential to mobilize the masses.

The Erdogan government, on the other hand, resents Iranian support in Syria for what it considers “a merciless dictatorship steeped knee-deep in blood.” It also resents Saudi Arabia for its support of the Egyptian military, which not only toppled the country's democratically elected president and his government but also, like Cairo, banned the Muslim Brotherhood as a terrorist organization.

It is unlikely that with such resentment and rivalry for regional influence Turkey, Iran and Saudi Arabia will be inclined to cooperate to try to stabilize the Middle East anytime soon, despite pleasant declarations of such intentions. They are too embroiled in their ideological and interest-based struggles to be able or willing to do so.

Their own plans and projects appear much more vital for them today than cooperating to stop major regional fires that have the potential to engulf everyone if allowed to continue unchecked. Reason and moderation continue to elude the Middle East and appear set to do so for the foreseeable future.