Despite his imminent victory, the mirage campaign of Abdel Fattah al-Sisi and his supporters was shown to be a failure by the embarrassingly low voter turnout. 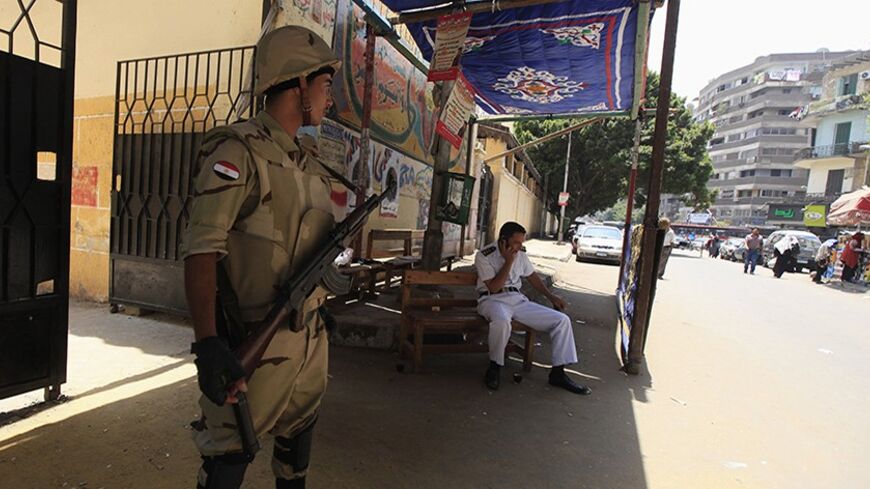 A soldier and policeman wait for voters at a polling station in the El Sayyeda Zeinab area on the third day of voting in the Egyptian presidential election in Cairo, May 28, 2014. - REUTERS/Amr Abdallah Dalsh

For those following the Egyptian media in the weeks leading up to the presidential elections, the sense that Egypt was about to have a god as its next president was inescapable.

In televised interviews with Field Marshal Abdel Fattah al-Sisi, journalists would not only avoid pressing Sisi on any issue, they would respond to all his answers with complete awe, acting at times as if his evasion of questions represented a silence that spoke louder than words. In Sisi's final interview, media personality Naila Omara even told him that she would be “afraid to be questioned by him on Judgment Day.” These media reports were propaganda in its lowest form and the only campaigning Sisi engaged in — the only campaigning that he needed, his supporters enthusiastically claimed.

The Sisi campaign compensated for its non-campaigning with an overreliance on the media and the propagation of inevitability with regard to Sisi’s election. This proved to be a huge strategic mistake; in any election, a lack of competition usually leads to low voter turnout, which is precisely what happened the first day of voting. The air of inevitability turned people off.

Egyptians felt that Sisi would win anyway — that he needed their votes like the Saudis needed charitable donations. The lack of campaigning and the absence of any voter turnout strategy — besides having media heads scream at their audience to go and vote — didn’t help matters much either. All the people who stated that Sisi did not need a campaign were suddenly eating crow.

Making the situation worse was Sisi's comment that he has “no bills to pay,” implying that he is beholden to nobody, and that whoever supports him will receive no special favor. Further, Sisi said that businessmen should expect less profits and more taxes during his tenure. This, naturally, didn't prompt political parties to organize any voter mobilization campaigns. The businessmen also felt no need to give their workers time off (or transportation, like in the days of Hosni Mubarak's National Democratic Party) to go vote for Sisi, because, what would be the point of that?

Suddenly, the man who demanded 40 million people go and vote for him found himself facing empty polls. Meanwhile, the media he counted on were having a nervous breakdown on live TV. Probably only then did Sisi realize he was facing public humiliation, and that the civilian state institutions, specifically the Electoral Committee, had a big hand in it.

The inevitable clash between Sisi and the state was to be expected, but no one imagined it would start on the first day of elections. The transitional government issued and approved a new budget for Sisi’s first year in office that would drastically cut fuel subsidies and increase the price of electricity. Then, the Electoral Committee conveniently ignored setting up polls for migrant workers (those who work and live in governorates different from the ones they're registered in), around 6 to 9 million voters, despite setting up ones for the constitutional referendum six months earlier.

Once the media picked up on it, the Electoral Committee said setting up migrant polls would jeopardize the legitimacy of the elections. That night, the government suddenly announced that on the second day of voting, government workers would have the day off to go and vote. The government urged the private sector to do the same, and threatened fines of 500 Egyptian pounds ($69) for those who didn't vote. On the second day of voting, the Electoral Committee upped the threats by announcing that those who didn't go to vote would be legally prosecuted by the state — that would mean the public prosecution of at least 30 million people. The government also contacted malls to close their doors and kick out customers.

The media continued their hysteric voting coverage as their cameras at polling stations captured no lines and empty voting booths for the second day in a row. The Electoral Committee was completely unaffected and continued to refuse to open migrant polls. For the millions of Egyptians watching TV, a scandal of epic proportions was taking place. As a commentator on social media put it: In less than 48 hours, Sisi went from the man who would slide into office with millions of votes, to an old man who the state and the media were doing their damnedest to get elected.

In complete panic mode, the Sisi campaign, according to a source, contacted secular political parties, begging them to turn out the vote. The political parties moved their men with cars all over the governorates, and mobilized their voters for the final hours of the second day of voting. The polls started seeing traction again, and the TV screens displayed lines in front of polling stations with maybe two to three hours until the polls closed. That’s when the Electoral Committee announced extending voting for a third day — against the explicit desire of both candidates and without giving the day off or adding migrant polls — thus making an exception that didn’t solve a single problem. Both the Sisi and Hamdeen Sabahi campaigns objected mightily to the extension, with Sabahi threatening to withdraw from the elections altogether. The Electoral Committee then proceeded to shut down polling stations an hour early, turning away voters who were standing in line.

The head of the Electoral Committee ignored all of these objections, and told the media — the same media that have been harping on the low turnout for two days — that the turnout was 37%, meaning 20 million voters. The media suddenly started celebrating the great election turnout and the millions of Egyptians who voted, completely losing the narrative and whatever was left of their credibility. Jokes about invisible voters flooded social media. The next president, who would want a historic turnout to give him the mandate to rule, has had his legitimacy questioned even before assuming office.

The irony is that Sisi was going to win regardless, but his hubris and his demand that 40 million voters suddenly appear at the polling stations for him — without providing them a platform or any kind of campaign — bordered on delusional. I previously stated that having the military, the media, the businessmen, the old regime and the Gulf on your side, without real competition, and still not being able to run a successful campaign, is a new level of failure. This new level of failure apparently didn’t go unnoticed by the state, and they made their move. In two days, they took the god that the media created and made him bleed, and once a god bleeds, no one believes in his deity-like nature anymore. His alleged countrywide support is now severely doubted, as well as his managerial ability and the illusion that the state will follow his lead. The legend of Sisi the god was over before he took office, and Sisi the president of a corrupt and unruly state was born. In less than two days, the man has been brought down to earth and must face the new reality: This is not the military, and he may be in way over his head.