Palestinians are eagerly preparing for the visit of Pope Francis to the Holy Land, where he is expected to express his support for Palestinian rights and statehood. 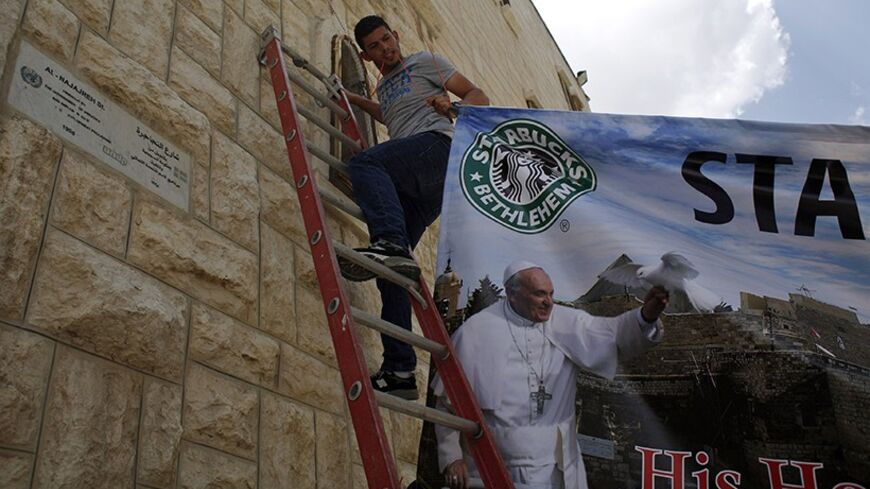 A Palestinian hangs a poster of Pope Francis in the West Bank town of Bethlehem, May 22, 2014. - REUTERS/Mohamad Torokman

Political analyst Rami Khouri gives two main causes for the anger that has brought Arabs to the streets: humiliation and the search of legitimacy. These sources are clear as Palestinians prepare for the visit of Pope Francis to Palestine as part of his Holy Land visit that also includes Jordan and Israel.

The Palestinians are looking to Pope Francis to help legitimize their aspirations of independence and statehood, and hope the visit will shine a light on their decades of refugee existence, occupation and colonial settlement. Much effort went into ensuring that the pontiff’s visit to Palestine precedes his visit to Israel so as not to create the impression that Palestine is an internal Israeli issue.

The official itinerary says that the pope will meet President Mahmoud Abbas at the presidential headquarters in Bethlehem. In capital letters, the schedule says that on the morning of May 25, the pope will make a “courtesy visit to the president of the State of Palestine.” The visit to Palestine will also include a short stop for a meeting with Palestinian refugee children from Aida, Dheisheh and Beit Jibrin.

The reference to the State of Palestine is fitting, as the Vatican supported the overwhelming decision by the UN General Assembly to recognize Palestine as a nonmember state, the same status held by the Holy See. The Vatican has publicly called for full Palestinian sovereignty over the land of Palestine. While Palestinians will welcome the recognition that the pope’s official visit to Palestine will provide, the visit will also be an opportunity for them to protest the continued Israeli occupation and restrictions.

A church committee began releasing a series of videos that began with a five-minute report about the permit system that Israel uses to control the movement of Palestinians. A cross made of chipped stones from the separation wall will be presented to the pontiff, symbolizing the difficulties that Palestinians face every day as they carry the cross of oppression. A special photography exhibit will open on the occasion of the pope’s visit by the Palestinian Museum, juxtaposing iconic biblical images with those of current Palestinian suffering.

Church leaders have also been condemning a series of attacks against churches by radical Jewish settlers, known as “price tag” attacks. Jewish extremists scrawled messages such as “Jesus is garbage” and “death to Arabs” on the Romanian Orthodox Church in Jerusalem earlier this month. Four Israeli settlers were arrested on charges of anti-Arab hate crimes, and an Israeli restraining order was issued to place a number of radical Jewish settler leaders under house arrest during the pope's visit.

This visit to Palestine will provide a unique opportunity for Palestinians to restate their aspirations to end the occupation and establish an independent state, as well as find a just solution to the Palestinian refugee problem. The concern of Pope Francis for the needs of the poor and the social gospel that he has been preaching will be directly relevant to the economic and social disparity between the occupied and the occupiers.

After ending his visit to Palestine, the pontiff will leave Bethlehem by helicopter for Ben Gurion International Airport, where his official visit to Israel will begin. The symbolism of his recognizing Palestine, hearing the voices of its people and not crossing Israel's checkpoints will speak volumes.