On the eve of his departure from office, President Shimon Peres has revealed that three years ago, he brokered an agreement with Palestinian President Mahmoud Abbas, only to be rejected by Prime Minister Benjamin Netanyahu. 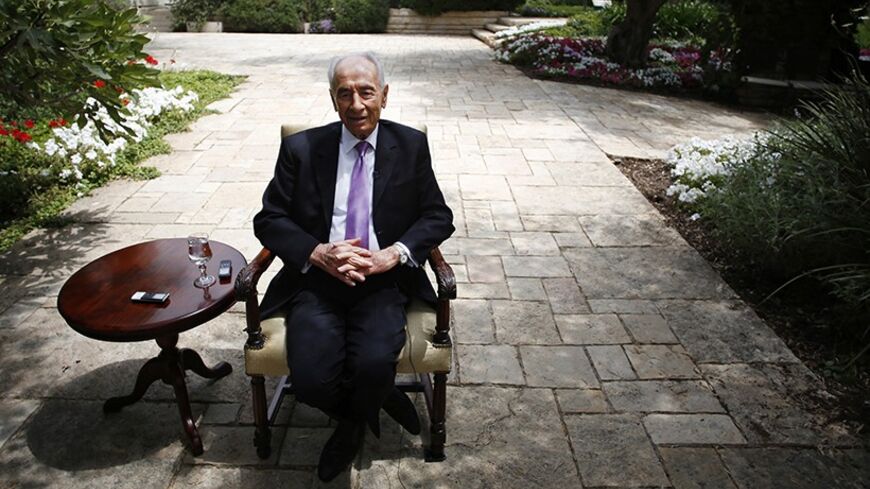 Israel's President Shimon Peres speaks during an interview at his residence in Jerusalem, June 16, 2013. - REUTERS/Baz Ratner

In a series of interviews that Shimon Peres granted for Israel's Independence Day, just before completing his seven-year term, the president of the State of Israel made sure to supply one significant diplomatic headline. In an effort to maintain his public relevancy in his next job as head of the Peres Center for Peace, in which he will continue to promote the diplomatic process with the Palestinians, Peres said that he reached a series of understandings with Palestinian President Mahmoud Abbas three years ago. These understandings, he said, should have enabled the signing of an agreement. But according to him, “[Prime Minister Benjamin] Netanyahu stopped it.”

In the interviews, Peres said that during Netanyahu’s second term, Abbas agreed to recognize Israel as a Jewish state, to compromise on the issue of refugees and to show flexibility in the matter of borders. Instead of insisting on a return to the 1967 lines, he was prepared to negotiate on the territory of the Palestinian state. Peres revealed that he was acting with Netanyahu’s knowledge. However, when he went back to the prime minister with the agreement, Netanyahu led him to understand that the Middle East Quartet’s envoy to the Middle East, Tony Blair, had a better proposal. With that, said Peres, Netanyahu dissolved a historic agreement.

The sense that the president attempted to convey before moving to his new office at the Peres Center in Jaffa is that peace with the Palestinians was within reach, and that between Netanyahu and Abbas, it is the Israeli prime minister who is rejecting peace. This fascinating and important story could have easily been the opening shot in a negative political campaign targeting Netanyahu, with Peres uniting a coalition of all the centrist and leftist parties against him. But the president, who will celebrate his 91st birthday in August, has already announced that he has no more political ambitions. The option of returning to politics always seems to hover around Peres, but it looks like this time, he is serious about staying away.

But even without a political platform, Peres plans to continue influencing politics. He has said in interviews that he doesn’t intend to take a single day of vacation. Relaxing at the beach bores him. And so, with a single headline, Peres is beginning to remove the mantle of national and official consensus under which he has worked as president and dive back into the sullied waters of local politics, thus inviting doubt about his credibility.

It was only a matter of time before someone got up to contradict him. Netanyahu’s office spent the holiday mulling its response to his claims and decided that it would avoid attacking Peres directly out of respect for the presidency. Despite the damage to Netanyahu's image, the real arrows were aimed at Abbas again. Then on May 7, in an interview with Army Radio, the tone began to change. Maj. Gen. Yaakov Amidror (res.), who served as national security adviser during the period in question, completely contradicted the president’s description of the agreement that Netanyahu supposedly scuttled.

“Never happened,” said Amidror, when asked to respond to the story. “The whole thing seems strange to me,” he added, and even as someone who was intimately acquainted with the most highly classified diplomatic matters, he said he was unaware of any agreement in which Abbas compromised on the matter of refugees or was willing to recognize Israel as a Jewish state. In other words, Amidror said that the president wasn’t telling the truth. Hearing that might be disconcerting to the president of the State of Israel, especially since it was said by a professional who, to the best of everyone’s knowledge, is innocent of any significant political interest.

The result is that the only thing to come of all the festive interviews that Peres granted to the media is doubt about his credibility. But this was also a sensitive point throughout most of his time as a politician. It is not at all clear why Peres and his people couldn’t have waited until the end of his term before starting to roll about in the political arena. And if he felt it was urgent to say what he did, why didn’t he do it before?

But that’s not the only disturbing thing about this story. Though Peres claims that he acted transparently as an envoy of the prime minister of Israel, it is not at all clear what mandate he received to conduct these negotiations. While it is reasonable to assume that Netanyahu granted Peres the authority to operate some channel of communication, it is hard to believe that he intended for the president to be his lead envoy to the main negotiations channel. A deep diplomatic chasm separates the two men. Even after the Bar Ilan speech of 2009, in which Netanyahu declared his support for a two-state solution, he remained the leader of a right-wing government, bound within a party that has become more extreme and committed both politically and morally to a right-wing electorate.

Furthermore, the very idea that Netanyahu scuttled an agreement formulated by Peres is problematic. It is the prime minister — and not the president — who has the political power and authority to implement or avoid diplomatic moves. Peres may be a great statesman who enjoys popularity on the world stage, but he can still only advise and recommend. The final decision and its implementation remain in the hands of Netanyahu, who acts in accordance with the will of his electorate and the interests of the people as he sees them.

It seems that in this particular instance, Peres followed the same patterns that were characteristic of his behavior in his previous political positions. There were a few cases in which Peres served in various senior positions alongside different prime ministers, and operated channels of negotiations that exceeded his authority. It was this pattern of behavior that earned him the reputation of being subversive.

In 1987, Peres was foreign minister in the national unity government headed by Prime Minister Yitzhak Shamir. He held clandestine negotiations with King Hussein of Jordan, promised him the government’s support for the “Jordanian option” and signed an agreement with him that came to be known as the London Agreement. While Shamir knew about these contacts, he did not support the Jordanian option, and the contacts eventually ended in disappointment.

This kind of thing happened again in 1990, when Peres brought down Shamir’s national unity government and tried to create a narrow, left-wing, ultra-Orthodox government (in a political maneuver known as the “dirty trick”), in order to advance an initiative by then-US Secretary of State James Baker to resolve the conflict with the Palestinians. It took Peres years to recover from the damage he suffered when that effort failed, and he went back to being chairman of the opposition.

Peres served twice as prime minister for very brief periods. The first time was from 1984 to 1986, as part of the rotation agreement between the Likud and Labor parties, after the elections between the two blocs ended in a deadlock. Those were two very successful years in Peres’ political career. Inflation was brought under control and the IDF retreated from most of Lebanon, apart from the strip of land known as the security zone. The second occasion came on Nov. 4, 1995, the night Prime Minister Yitzhak Rabin was assassinated. In that instance, Peres served in the position for just seven months until he was defeated by Netanyahu in the next election.

In neither of those times was Peres actually elected prime minister. He entered the position by dint of circumstance. Nothing about this should detract from his unique abilities or his achievements as a groundbreaking statesman who is able to get things done. Nevertheless, there is some significance to the fact that he never received a mandate from the Israeli public to sit in the captain’s seat and make pivotal decisions affecting the fate of the country. Even in the midst of the current political turmoil, it is worth remembering that Netanyahu was the person elected to lead the country during these years, and that any decision he made to avoid some agreement or other was both democratic and legitimate.