Israel adapts to a new alliance structure based on common security interests, and in anticipation of a nuclear Middle East. 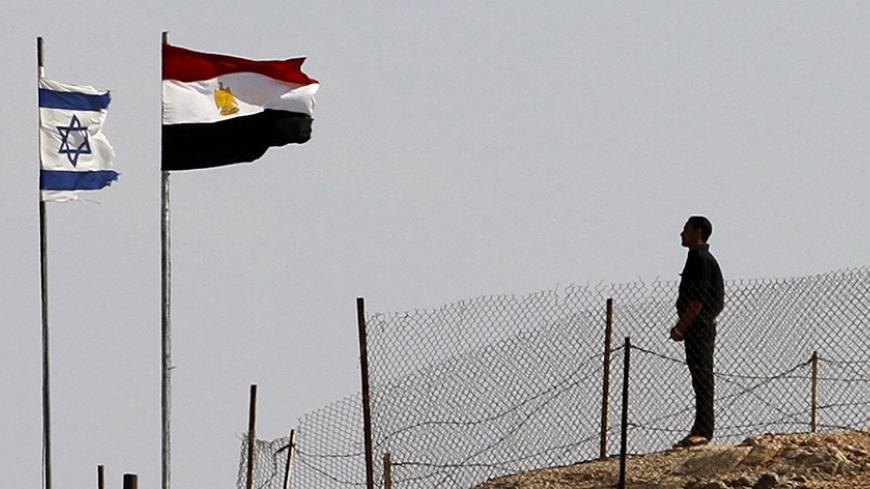 An Egyptian soldier stands near the Egyptian national flag and the Israeli flag at the Taba crossing between Egypt and Israel, about 430 kilometers (256 miles) northeast of Cairo, Oct. 26, 2011. - REUTERS/Mohamed Abd El-Ghany

1. On the night between Thursday and Friday, May 23, the leader of Ansar Bayt al-Maqdis, an al-Qaeda-affiliated terrorist organization, was killed. This person, Shadi al-Menei, was wanted for a long time by practically all the intelligence services in the region, including those of Israel and Egypt. According to initial reports, a vehicle with armed men drew close to Menei and two of his militants. An accurate and lethal drive-by shooting killed this man, who was said to be responsible for most of the attacks against Egyptian soldiers in Sinai as well as the firing of Grad rockets from Sinai at Israel’s southern city of Eilat.

Speculations about who killed Menei will surely abound over the coming days. The first speculation is predictable, namely a struggle between rival Bedouin tribes in Sinai that are settling scores. On the other hand, there is always someone footing the bill behind every such “settling of scores.” A well-known technique used by intelligence services is to hire local “subcontractors” that are willing to carry out missions, including assassinations, for large sums of money and/or additional benefits. Either way, Menei is no longer with us, prompting no one in Cairo, Jerusalem, Amman or Riyadh to really mourn for him.

The security collaboration between the Israel Defense Forces (IDF) and the Egyptian military is at its zenith. Senior Israeli security officials relate that during the period of Mohammed Morsi, Egypt’s ousted president, as well as during the time of Hosni Mubarak, the deposed president, Egyptians never took the trouble to look into Israel’s claims. About a year ago, when Grad rockets were fired at Eilat, the general in charge of Israel’s Southern Territorial Command turned to his Egyptian counterparts with information indicating that the rockets had been fired from Sinai. Egyptians rejected this. “They were fired from Aqaba,” they alleged.

Currently, the Egyptians have a dedicated battalion that is deployed in the area from which rockets could be fired at Eilat. An army officer with a colonel rank has been tasked with this special mission, namely to avert fire at Israel’s southern resort city.

The leading presidential candidate in Egypt, Gen. (ret.) Abdel Fattah al-Sisi has said in media interviews on May 22, “If we don't control adequately our territory, and then rockets are fired at Eilat, killing 15-20 tourists, how should we react to that? We are responsible for our territory.” This is what Israelis kept telling the Egyptians in recent years. Although it took Egypt some time, the penny did drop in the end. “What has happened in Egypt is that they switched from a mode of repression and denial to taking responsibility and taking resolute action,” an Israeli security official said.

Having declared Hamas a terrorist organization posing a danger to Egypt’s national security, Egyptians have waged an all-out war on the organization. It is no wonder that on the morning that Menei’s assassination was published, it also turned out that Khaled Meshaal, the chairman of Hamas’ political bureau, had recently met with a senior al-Qaeda member after a “long breakup period.” This nexus between al-Qaeda and Hamas proves the point the Egyptians — as well as the Israelis — have been making for a long time, thus bringing into sharper focus the new emerging camps in the Middle East. These camps are based more on common interests and enemies than on mutual love.

Presently, the Egyptian military has a considerable force in the Sinai Peninsula, consisting of two infantry brigades, a tank battalion, an Apache helicopter gunship squadron and engineering forces. This presence constitutes a far larger and considerable force than what Egypt is allowed to keep in Sinai under the peace accords between Israel and Egypt. Israel, for its part, permits Egypt to hold this force, with the goal of a resolute war against terrorist cells. This arrangement is being renewed by Israel every few months. Israel’s condition is that these forces can remain in place for as long as they continue to combat the terrorist organizations on the ground. In recent months, these forces have been operating with persistence, resolve and perseverance, demonstrating effective capability. “They move from site to site, from compound to compound, from house to house,” says an Israeli security official, adding that “they have come to understand that the terrorism in Egypt is directed primarily against them.”

2. Benjamin Netanyahu, the Israeli prime minister, said on Friday morning, May 23, in an interview with Bloomberg View that there is a growing consensus in Israel that Mahmoud Abbas, the president of the Palestinian Authority, is no partner, and that “the idea of taking unilateral steps is gaining ground from the center-left to the center-right.”

Netanyahu’s statement came amid a fiery political drama that raged last weekend between him and Tzipi Livni, the justice minister and Israel’s chief negotiator. It turns out that last Thursday, May 15, she met with Mahmoud Abbas, contrary to an unequivocal instruction from Netanyahu prior to that meeting not to do so. Despite Netanyahu’s veto, Livni decided to hold the meeting nevertheless, prompting the prime minister to decide to dismiss her. The dismissal should have gone into effect last Saturday night, May 17, but Netanyahu had second thoughts at the last minute. In the interim, he made an urgent call to very high-ranking American officials to complain about “stirring the pot” and meddling in Israel’s internal affairs. He found out that the Americans stirred nothing and had actually no prior knowledge about the meeting.

Netanyahu exaggerates when stating that there is an emerging consensus in Israel that the Palestinians are not an option. Labor and Meretz, two parties, which together occupy 21 seats of the 120-seat parliament, are not part of this consensus. Livni’s Hatnua Party (six seats) supports continuing the negotiations with the Palestinians. Finance Minister Yair Lapid, whose Yesh Atid Party occupies 19 seats, is vacillating, but has declared many times that “he will not be part of a government that does not hold negotiations with the Palestinians.”

Netanyahu is in the right when saying that most Israelis blame the other side for the stalemate in the negotiations. There are quite a few good reasons to think that. It appears that Israelis have not heard US Special Envoy Martin Indyk in recent weeks. Yet living here in the region and being realistic, they are aware of the built-in, genetic difficulty of the Palestinians to accept Israel’s existence as a Jewish state in this regional sphere.

Regardless, however, a common mistake that has taken hold in recent years and become a universal truth has to be corrected. The proposal made by Ehud Olmert, Israel’s former prime minister, to Abbas at the end of 2008 — to which the Palestinian leader has yet to reply — is not “the best offer the Palestinians have ever received.” The proposals made by former Prime Minister Ehud Barak during the last round of talks between him and the Palestinians in 2001 in Taba, offered the Palestinians more territory, more refugees (50,000) and more Jerusalem. Olmert submitted a bold and good proposal to Abbas, but the latter had already seen better ones in his lifetime. That being the case, we must bear in mind that these proposals were submitted by Israeli prime ministers who were already lame ducks and essentially irrelevant. In both cases (Olmert and Barak), this happened just a few weeks before the general elections.

3. Another round of talks between the P5+1 (the five permanent members of the UN Security Council plus Germany) and Iran has ended, with no agreement with Iran in sight. This round appeared erratic: During the first day or two, the media was abuzz about “the imminent signing, maybe even during this round,” of a permanent status arrangement between the world powers and Iran. Then things bogged down, and later the round ended with no results. Officials briefing the media sounded pessimistic. Then, a few days after the talks were adjourned, Iran started singing a different tune, and its senior officials were quoted as saying that an agreement was very close “and most likely will be accomplished.”

What is unfolding behind the scenes, however, is a geodiplomatic drama of historic proportion. Standing at the forefront of the struggle against Iran’s nuclear program is Israel, but the greatest push comes from other countries, mainly Iran’s neighbors in the Persian Gulf, including Saudi Arabia and other Middle Eastern countries.

As published before, the axis between Israel and the Sunni states, with which it has not fostered diplomatic relations, is growing stronger. The cooperation, exchange of intelligence and policymaking regarding the most effective way to apply pressure on the powers have become almost commonplace.

A special event relating to this struggle has taken place recently. Quite a few Western intelligence agencies report a tacit agreement between Saudi Arabia and Pakistan, to the effect that if Iran acquires nuclear capability, Pakistan will sell at least one nuclear warhead from its stockpile to Saudi Arabia. Those who try to depict this information in a more picturesque way would say that in a certain warehouse in Pakistan lies a nuclear bomb in a special box that reads: “C/O Saudi Arabia.” The only thing that’s missing is the delivery date.

Not long ago, the Saudis held a military parade in Riyadh. It saw a first-ever display of ballistic missiles with a 3,000-kilometer (1,864-mile) range that seem to have been procured from China. Among the dignitaries at the grandstand watching the parade was Pakistan’s chief of staff.

It seems to me that the United States does not require a much broader hint than this one. In other words: It’s not a nuclear Iran, you fools. It’s a nuclear Middle East.