Israel waits for Egypt to deal with terrorists in Sinai

Israel observes the rise in Salafist violence just over its border in Sinai with alarm and waits for Egypt to take the necessary action. 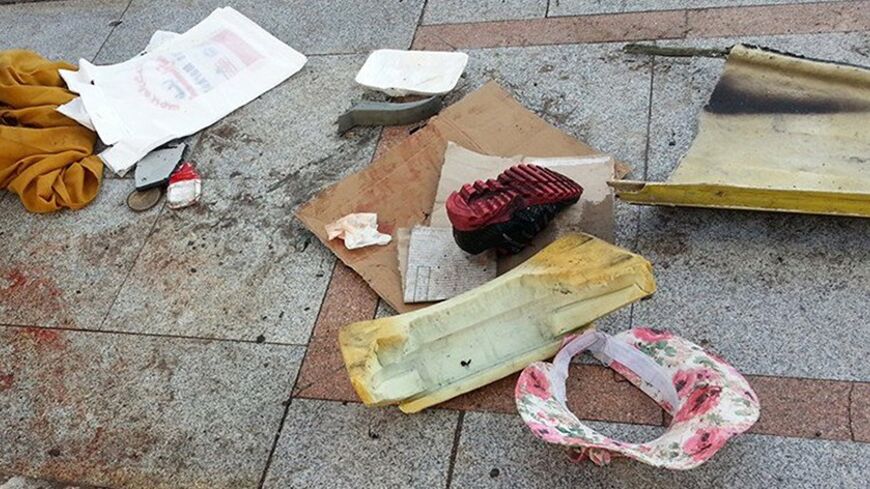 A shoe is seen on a pavement covered with blood after an explosion on a tourist bus in south Sinai, Feb. 16, 2014. - REUTERS/Stringer

On Feb. 17, one day after the attack on a bus of tourists from South Korea, just across from the Hilton Taba Resort in Sinai, the terrorist organization that claimed responsibility for the attack — Ansar Bayt al-Maqdis — issued a statement calling on all foreign tourists in the Sinai Peninsula to leave within four days. Those who did not, the statement read, might get hurt. Founded in 2011, this organization pledges allegiance to Ayman al-Zawahri, the leader of al-Qaeda who succeeded Osama bin Laden.

A war is going on in Sinai. It won’t be decided in a day, or in a matter of weeks or months. It will be decided only when Egypt makes up its mind and shows resolve by allocating the necessary resources and manpower needed to accomplish this objective. Presently, Egypt has more pressing issues to attend to than Sinai. Having tendered his resignation from the Egyptian army, Abdel Fattah al-Sisi is expected to announce shortly that he is vying for the presidency. Barring a dramatic change (caveat: the Middle East is the bedrock of dramatic and unpredictable changes), Sisi will become Egypt’s next president. Seeing himself neither as the successor of ousted President Mohammad Morsi nor, certainly, as the successor of President Hosni Mubarak, Sisi will try to be the new Gamal Abdel Nasser — namely the father of proud Egyptian nationalism, which has its eyes fixed on pan-Arabism and which seeks to reinstate Egypt to its "natural standing" as the leader of the Arab world and a stable regional power.

Top brass in the Israel Defense Forces (IDF) are both hopeful and concerned. Keeping a low profile and trying to give as little public advice as possible, Israel also stays out of the limelight, where sympathizers from both sides are huddled (rooting for the Egyptians are Saudi Arabia, Jordan, the United Arab Emirates, Moscow, Europe and the United States to a lesser degree). Any linkage between Israel and Egypt’s anti-terrorist struggle would be counterproductive to the latter’s interests, playing into the hands of those claiming that this is a joint anti-Islam scheme by Egypt, Israel and the West.

This is a true war of civilizations. Pitted on one side are the proponents of (relative) democracy, Arab nationalism and patriotism. On the other side is radical Islam, which sees the entire Middle East as Waqf territory, aspiring to set up one Islamic state; a caliphate that will be based on Sharia, thus doing away with the need for artificial national frameworks that were dictated by colonialist powers. And seizing the opportunity, it also wants to “throw Israel to the sea.” Jews have no business here.

This is how a very high-ranking Israeli defense establishment official described the events in Egypt: “With tires and brakes screeching, Egypt made a sharp U-turn. But it’s a strange U-turn, because Egypt didn’t go back to the starting point. Even if Sisi were to land the presidency, he will not find himself where Mubarak was. The new Egyptian president will have to take into account the Egyptian street and public opinion — factors that went unrecognized by the former regime, which discounted the masses, dominating it with bayonets of the Mukhabarat [Egypt's intelligence agency] and the army.”

And although the country is not back where it started, it still sees a dramatic change, which in a sharp and unpredictable reversal of fortune impacts mainly the Gaza Strip. As long as Morsi was in power in Egypt, Hamas in Gaza was the apple of the Egyptian regime's eye. The Muslim Brotherhood saw itself as Hamas’ big brother. They cooperated closely. Israel had been given indications and messages to the effect that as far as the Egyptian government was concerned, it no longer had freedom of action in the Gaza Strip. From now on, anyone who engages Hamas in Gaza is messing with Egypt, too. Egypt contemplated opening up the Rafah crossing (and actually did so intermittently). Thanks to the sprawling underground tunnel industry, the economy in Gaza boomed. While Israel gritted its teeth, Hamas Prime Minister Ismail Haniyeh was on cloud nine.

Yet, one day and it was all over. From Sisi’s standpoint, Hamas is the enemy — an ally of Ansar Bayt al-Maqdis. Undercutting Egypt’s interests, it kills its soldiers and undermines its regime. According to several Israeli intelligence assessments, Hamas leaders in Gaza are unable to leave the country. In fact, they are caught up in a closure from both sides: from the north by Israel and from the south in Rafah. Within a short period of time, Hamas lost Damascus, Tehran and Cairo, the latter having served as its host many times over the past year.

In principle, this development bodes well for Israel. However, it could also have detrimental repercussions. “What is happening in Gaza right now,” a senior Israeli military official explained, “is that it’s becoming a bubbling pressure cooker that has no safety valves. They have nothing to lose and nowhere to run. This could lead to an uncontrolled explosion.”

According to reports in Israel, Hamas has decided in recent days to either stop or reduce its efforts to prevent the firing of rockets from the Gaza Strip at Israel. Hamas is losing its hold on the ground to more radical organizations, which are cooperating with jihadist terrorist organizations in the Sinai Peninsula. Hamas is fed up with the fact that it is negatively credited for this activity, and that this activity is ''registered'' in his name by both Israel and Cairo. It is now searching high and low for solutions. Down the line, this could be conducive to despair and a subsequent blow up, which is what Tel Aviv is concerned about.

Meanwhile, the campaign against Ansar Bayt al-Maqdis in the Sinai Peninsula continues, but at low intensity. Israel and Egypt updated the security protocol of their long-standing peace accord. The Egyptian army consists of 11 regular battalions, which is a much larger order of battle than permitted in the accord. Among other things, it consists of a beefed-up armored battalion, a helicopter-gunship squadron, as well as quite a few commando forces. All told, it’s slightly larger than a division. Provided they are used to the fullest extent, these forces should be enough to vanquish terrorism. That has yet to happen. Sisi doesn’t want to take any chances before assuming the presidency and stabilizing his regime. Egyptians make do with laying siege on areas suspected of terrorist activity, gathering intel and carrying out pin-point operations.

“This won’t be decided,” a senior Israeli defense official said, “until a strategic decision to this effect is made. You cannot vanquish terrorism via remote control. We have been through this ourselves. We understood that until we incurred into the area and mopped up from house to house and alley to alley, it would simply not happen. At one point, Egypt will have to launch its own 'Defensive Shield' operation in Sinai. Until then, we will be seeing more of the same.”

What we saw this week is a serious attack on a bus of South Korean tourists, just a stone’s throw away from the Taba crossing where tourists cross the border from Egypt to Israel and vice versa. The ones who do take their chances are Arab Israelis, who serve as a less attractive target for jihadist organizations.

Eilat, Israel’s southern resort city that for decades symbolized a quiet getaway of infinite desert serenity, has found itself in the past year in unchartered territory. The “red color” siren is heard over and over again. Grad rockets land around it in a trickle of alternating frequency. To date, the Iron Dome anti-rocket battery, which was deployed in the city, has averted fatalities. However, if this situation continues, Eilat, which serves as a major tourist attraction, could suffer from a sharp decrease in the number of tourists resulting in a real economic crisis.