The rockets fired lately on the southern city of Eilat might force Israel to choose between the security of its citizens and keeping the peace accord with Egypt, writes Alon Ben David. 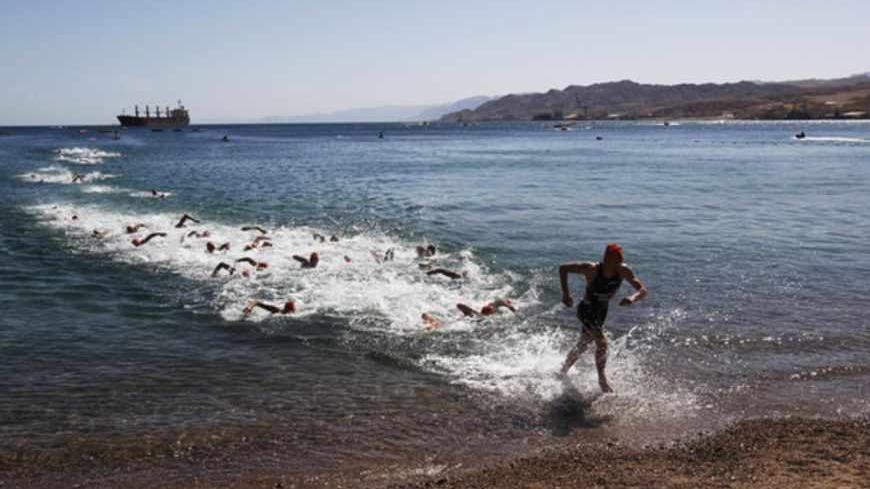 A triathlete runs out of the Red Sea during the Elite Men's Triathlon ETU European Championships in the southern Israeli city of Eilat, April 21, 2012. - REUTERS/Ronen Zvulun

This week’s rocket fire on the city of Eilat (April 17), the seventh such occurrence, illustrated once again the vulnerability of Israel’s most southern tip. The ability to defend Eilat is limited: There are physical limitations for using the Iron Dome anti-missile defense battery. Additionally, the peace accord with Egypt prohibits Israel from scuttling terrorist activity originating from the Sinai Peninsula. As a result, Israel has to rely on Egypt to prevent fire from its territory despite the knowledge that even one single rocket could deal a lethal blow to the city’s tourist industry.

Its proximity to the borders of Jordan, Saudi Arabia and Egypt notwithstanding, the resort city of Eilat — the eternal land of the carefree, where the sun always shines — had been perceived by Israelis until recently as a haven of serenity and security. Operating almost uninterruptedly, the Sinai-based terrorist organizations have identified in recent years this Achilles’ heel. The two rockets that were fired this week from the Moon Valley area in Sinai were a stark reminder of how fragile security is and how the peace and quiet in Eilat can be easily broken.

In 2010, before Mubarak’s fall, the terrorist organizations fired twice at Eilat, signaling that the Egyptian grip in Sinai was becoming increasingly tenuous. By 2012, four incidents of rocket fire had been recorded. Some of them were carried out by Palestinian organizations, whose headquarters are in Gaza, and some by global jihad groups that had taken hold in Sinai and recruited militants from among the local Bedouins. This was on top of the killing of Israelis by terrorists from Ansar Bait al-Maqdis, who had incurred into Israel from Egypt in August 2011, just a few kilometers off Eilat.

In view of the fact that Cairo was having a hard time exercising its sovereignty and enforcing security, it was in 2010 that Israel identified the vulnerability of its border with Egypt and the potential threat from the latter’s hinterland. Israel’s main thrust was to build a new fence along the Egyptian border and establish a surveillance infrastructure in order to collect intelligence information about terrorist activity in Sinai. As for the rocket threat, however, an effective solution has yet to be found.

In August 2012, the members of Ansar Bait al-Maqdis — Bedouins, Egyptians and volunteers from other countries — managed to incense Cairo after murdering 16 Egyptian soldiers and policemen during iftar (the lavish meal concluding the Ramadan) at a police station in northern Sinai. Egyptian President Mohammed Morsi dispatched his military for a broad and much-publicized operation in the Peninsula, the objective of which was to deter the Bedouin population from cooperating with these organizations.

Concurrently, Egypt started monitoring more vigorously the gunrunning operations in Gaza, telling Hamas in no uncertain terms that it would not put up with any Palestinian activity in Sinai which could lead Egypt to a confrontation with Israel. The Egyptian anger at Hamas did not subside even three months later, when Israel launched Operation Pillar of Defense in Gaza. Under Egyptian pressure, Hamas was forced to quit the fighting cycle with Israel. Hamas also aggressively enforced the cease-fire agreement on the other organizations in Gaza.

In contrast to the Islamic Jihad, the Salafist-jihadist organizations in the Gaza Strip — chief among them the Majlis Shura-al-Mujahidin Fi-Aknaf Bayt al-Maqdis (the Shura council of jihadist warriors around Jerusalem), a Palestinian organization operating in both the Gaza Strip and Sinai — have refused to accept the cease-fire. When its militants fired rockets at Israel during the visit of US President Barack Obama on March 21, Hamas acted quickly, arresting the shooters. Now that organization has chosen to defy Egypt by firing rockets from Sinai to Eilat.

It was two weeks ago that concerns about such possible fire were raised, which is why Israel had deployed the advanced Iron Dome battery near Eilat, connecting the city to an early-warning system for the first time. At the moment of truth, when the Grad rockets were fired from Sinai, the Iron Dome system identified them and the sirens went off, yet the conditions were not conducive to an interception.

That Eilat has a particularly busy airport and the Jordanian airport of Aqaba is located relatively close by makes it hard to protect the southern city. What also makes Eilat’s airport vulnerable is the fact that the planes make their approach for landing very close to the Egyptian border, thereby exposing them to anti-aircraft rockets. After the Grad rocket fire, the Israeli Air Force ordered that all air traffic to Eilat be halted, albeit just for a few hours, realizing that Eilat is entirely dependent on the ability of tourists to get there by air. In consequence, the planes landing in Eilat will soon be equipped with protection systems against anti-aircraft missiles.

To date, Eilat has skirted a significant rocket impact, partly due to the incompetence of the shooters and partly due to luck. But the IDF knows full well that all it would take to shatter the city’s peaceful image and deal a lethal blow to its main livelihood is one accurate rocket hit of one its hotels or tourist resorts.

What is unfortunate is that Israel has no better solutions to defend Eilat. The Egyptian border has transformed from a “peaceful border” to a “border with peace.” Terrorism originates from one side of the border, yet Israeli is unable to respond or act to scuttle it on its other side since it respects Egyptian sovereignty.

Meanwhile, Israel continues to rely on Egypt and luck. However, accurate fire at Eilat or “hot warnings” about terrorists poised to open fire at the southern city will force Israel to make a tough choice: keeping its citizens out of harm’s way or keeping the peace accord with Egypt.