A video of an Iraqi MP from the State of Law Coalition distributing deeds to plots of land in exchange for votes for the coalition has triggered controversy, and raises broader questions about a rise of political patronage in the country. 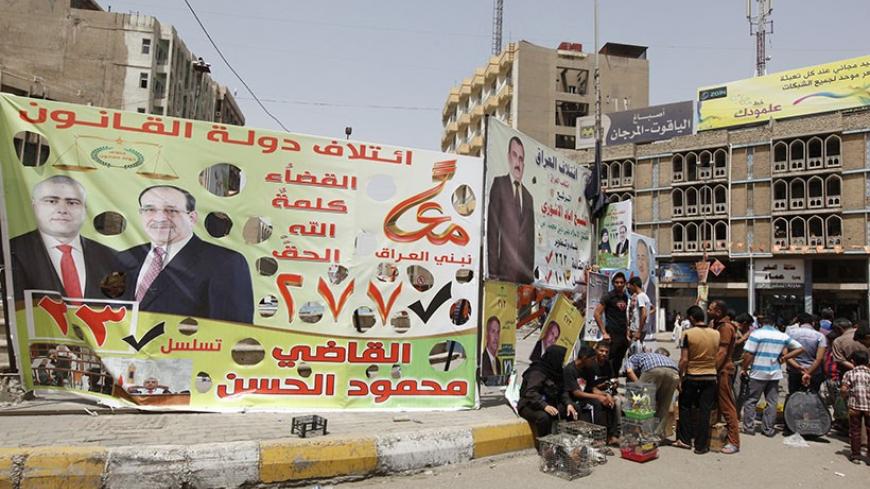 An election poster of Mahmoud al-Hassan from Prime Minister Nouri al-Maliki's State of Law Coalition is displayed along a street at the start of the election campaign in Baghdad, April 18, 2014.

A video of Mahmoud al-Hassan, an Iraqi member of parliament (MP) from the State of Law Coalition, talking to a group of farmers in the province of Diwaniyah has circulated in Iraqi media. In the video, he is holding a stack of real estate title deeds and telling the farmers that Prime Minister Nouri al-Maliki has sent him to give them plots of land in exchange for their votes in favor of his coalition in the elections. The video has triggered much controversy in Iraq, as its content constitutes several violations of the law. Hassan is an MP and does not hold any executive position that allows him to distribute title deeds. Moreover, his actions are seen as political extortion, aimed at obtaining votes by using the state's resources.

The Independent High Electoral Commission (IHEC) fined Hassan 50 million Iraqi dinars ($43,000) for violating the rules for electoral campaigns. Yet, some felt that this punishment was not sufficient and is not commensurate with the seriousness of the offense he committed. They believe that the IHEC is being lenient with the prime minister's allies. What is interesting is that Hassan had been a judge in one of the most critical Iraqi courts — the Supreme Iraqi Criminal Tribunal — which was supposed to make him more vigilant about observing laws.

This incident is further indication of the growing tendency among groups that have strong leverage in the executive branch to use the state's resources and capabilities to achieve political advantage over their opponents. The State of Law Coalition has become increasingly dominant over many of the state's departments, which facilitated the use of political patronage in gaining followers and votes in a similar way to that by the Kurdistan Democratic Party in Iraqi Kurdistan.

An Iraqi politician, who spoke on condition of anonymity, told Al-Monitor that during the 2012 crisis, when some political forces tried to withdraw confidence from Maliki, the impartial forces tried to blackmail Maliki by demanding a great deal of personal favors in return for not joining the coalition to withdraw confidence. These demands included granting MPs the freedom to appoint their cronies in state departments, so as to enhance their political weight. The same thing happened with the ministers who turned their allegiance away from their political parties that were opposing Maliki. Maliki himself talked about being blackmailed by his partners in the government, as they wish to achieve personal interests without being held accountable.

The State of Law Coalition has largely based its electoral campaign on government jobs and distributing land and housing to the needy, and has sought to provide social services outside the traditional institutional frameworks to gain more popular support. Maliki himself has been keen to distribute real estate title deeds to citizens during his campaign tours.

The distribution of land has always been one of the important tools used by the political power in Iraq to gain votes or reward followers. However, the danger of this practice lies in the fact that it has not been carried out according to a legal and administrative context that has been agreed on in an nondiscriminatory manner.

Politicians have long used this means to serve their interests, which was very common during Saddam Hussein's rule when giving a plot of land was a mere "tip" by the president for his supporters.

Besides the distribution of land, during his electoral campaign Maliki launched a series of government projects, which was seen by many as a kind of political propaganda, where the prime minister is using the government institutions to serve his political party.

One of the most striking phenomena during the recent elections is the nomination of Maliki's relatives as candidates within the State of Law Coalition or smaller supporting electoral lists.

The two candidates who attracted most attention were Maliki's sons-in-law, who work in his office: Hussein Ahmed Maliki (Abu Rahab) and Yasser Abdul Sakhil Maliki.

In fact, the names of the two have been increasingly circulating in political and media circles in recent years, which is an indication of a rise in their influence that has been associated with the growing power of Maliki's office. As Maliki felt that other forces have been trying to restrict his freedom and make him fail, he sought to circumvent constitutional institutions by delegating powers to acting officials or maximizing entities that are directly associated to him, such as the office of the prime minister. This tendency has grown during Maliki’s second term to the extent that Ahmed Chalabi, the leader in the Shiite Citizen Coalition, stated in December 2013, “The government is currently administered by Maliki and a small circle of relatives and loyalists."

Maliki is no different from most Iraqi officials who came to office and surrounded themselves with their close associates and cronies. However, with his consolidation of power over the past few years, the influence of the prime minister's relatives has increased, overshadowing their counterparts in the offices of other officials.

Moreover, Maliki did not appoint his relatives only to get his political opponents off his back, but also to weaken his rivals in the Islamic Dawa Party, whose other leaders continue to believe that Maliki owes his position to the historical role of their party.

It seems that in the current period the Dawa Party’s role has declined, as the influence of other figures and forces linked to Maliki has increased.

Maliki, on the other hand, sees the party — with its limited ideological and organizational nature — insufficient to reflect bigger alliances and interests, which have spawned within the government bureaucracy and the military institution in the framework of the State of Law Coalition and its close forces.

Some believe that the nomination of Maliki's sons-in-law in Karbala may have been partly aimed at belittling one of the most prominent leaders in the Dawa Party, Higher Education Minister Ali al-Adeeb, who ran at the head of the list of the State of Law Coalition in the city.

According to leaked election results, Maliki's two relatives collected together a large number of votes at Adeeb's expense. They hail from Karbala and managed to establish extensive relationships with the social forces, especially through the "nongovernmental" organizations they support and fund. They also take advantage of their kinship with the prime minister to provide facilities and benefits to some segments of society.

For his part, Yasser has played a role in contacting tribes in the center and south of the country. He also founded an organization under the name of "Al-Shabab Houna," to take care of and provide services to young people. His name was put forth to be nominated as the new governor of Karbala in case the post becomes available in the future.

The predominance of the executive power is not something new. It has been present in most rentier states, and it seems that the same scenario is now playing out in Iraq. With this predominance, constitutional institutions have been surpassed, becoming weaker, as opposed to the growing political patronage as a way to manage the state's affairs. Should things continue down this path, the old political legacies in Iraq are likely to be back to the forefront. These politics were based on the quasi-unilateral dependence on oil revenues to serve the interests of the dominant forces, which run this process in such a way to preserve their power and dominance.