Female factory workers in Iran face many challenges in the workplace, and recent laws encouraging reproduction have made their situations even more difficult. 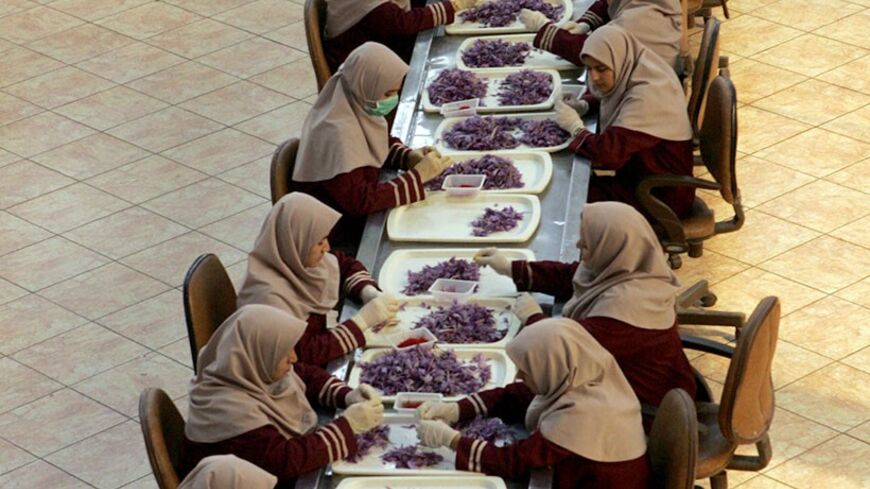 Iranian female workers, many of whom work under dire circumstances, are often slighted and undergo hardship alongside the tough nature of their jobs. In an interview with Iranian Labor News Agency (ILNA), Haleh Safar-Zadeh, an activist for female workers’ rights, talked about many of the issues facing Iranian women who work in factories. She said, “The minimum wage female workers accept for work is so low that it has angered their male co-workers, who tell them these kinds of agreements may backfire on them and result in lower wages for them — the male workers — as well." She added, "In certain instances, single women are employed in factories on the condition that they commit to remaining single and/or refrain from reproduction.”

While many offices and companies, including in the public sector, have free day care centers for their personnel, rarely does a factory or industrial complex offer such facilities. Meanwhile, the government's recent policies of promoting having more children and offering incentives such as longer maternity leave is lowering numbers of women personnel, as they faced more complicated problems upon their return to the workforce. And as for governmental factories, employers and recruiters generally prefer to hire men over women on account of the conditions they have recently become obligated to follow, such as granting longer periods of paid maternity leave, establishing day care centers and allowing nursing breaks for new mothers.

Many women endure difficult circumstances and lower pay to find employment. That is how most women end up working in private industrial and manufacturing units, where there are no official statistics for working women or the circumstances they endure.

Official numbers issued by the Iranian government in 2013 show that only around 5% of the total workforce in factories and manufacturers in the public sector are women, and some experts believe that the small number might be part of the reason the rights for women workers being overlooked.

The National Syndicate of Women Workers was established in 2003 to protect women workers and make serious efforts to create equal conditions for men and women in the workplace. Most female factory workers and women's rights activists, however, believe that what has been done so far has not been nearly enough and that the problems female workers face continue to seriously outnumber the solutions.

I conducted a telephone interview with the head of a regional female workers syndicate in eastern Iran. The head, who did not wish to be named, said, “The number of women workers declined during [Mahmoud] Ahmadinejad’s presidency, and the approval of fewer working hours and telework for women was another major blow to female Iranian workers. It was, in fact, literally a liability, not an asset for women.”

Official figures — the latest of them published in 2011 — show that Iranian women suffered double the current unemployment numbers during Ahmadinejad’s presidency. The most recent official statistics — announced for the first quarter of 2014 — of unemployment in Iran show 10.5%, while many agree that the unofficial rate of unemployment among Iranian women was close to 20.3% within the same time period.

The latest statistics for female Iranian workers were presented in May 2013 by parliament member Alireza Mahjoub, the managing director of Iran’s “Khaneh-ye Kargar” (Workers Home). Mahjoub pointed out that in total, 15-17% of factory workers (public and private) are women, and that during Ahmadinejad’s administration, women tried as hard as they could to refrain from joining the factory workforce.

Nahid, a 33-year-old worker in a textile factory, tells me that although she and a few of her co-workers are the breadwinners of their families, they are overtly discriminated against, as their male colleagues are assumed to be the household heads and breadwinners.

Official and totally outdated figures published by the government conclude that 22% of serious workplace accidents — safety mishaps — gravely hurt women employees. Unofficial statistics, however, claim that this number is much higher among female workers.

Unofficial statistics also count women as more than 90% of workers in the rug-weaving and carpet-manufacturing industry. A study conducted and published by a group of medical students of Yazd University in Iran proved that over half of the workers in rug-weaving shops and workplaces are girls under the age of 16, the majority of whom work 12 to 16 hours a day. The same research shows that at least 10 different kinds of health conditions, including skin, bone and muscle afflictions, chronic headaches and vision problems are quite common among the female workers of this domain due to the environmental conditions they face at work and the types of material they work with.

Despite serious warnings against employing women to work in brick factories and mines due to health threats, female workers continue to be active in these sectors and continue to face serious health issues.

While the official and unofficial numbers may vary, the undeniable facts are that Iranian female workers are slighted, their circumstances and issues remain overlooked and they are in grave need of attention.