The last of Iraq's hand-woven carpets

Once an Iraqi trademark and a sought-after speciality, it seems like the handmade carpet industry in Iraq is drawing its last breath. 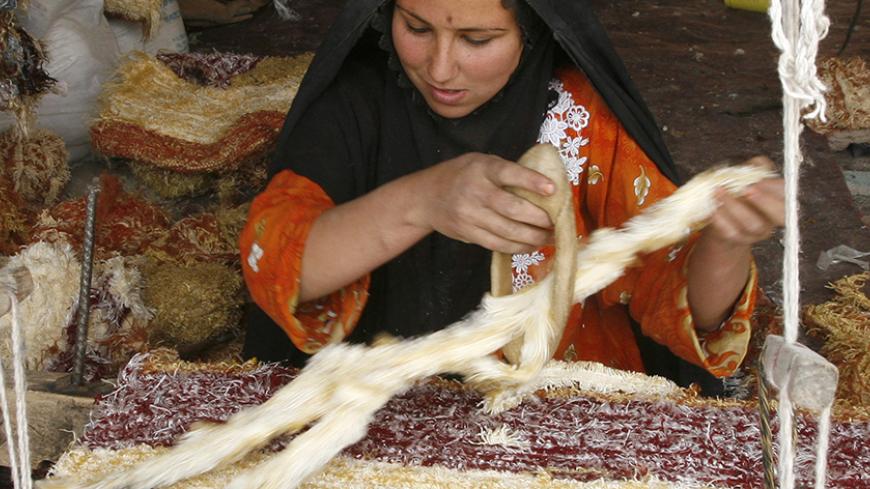 BABIL, Iraq — Umm Hassan, 60, from western al-Hamza, 100 kilometers (62 miles) south of Baghdad, learned handmade carpet weaving from her mother when she was 10 and still practices the craft.

The local name given to women who weave handmade carpets is “Al-Hawwakah,” (Arabic for weaver). Umm Hassan spoke to Al-Monitor about her work.

“I've been weaving for many years. I employed some workers and together we would make three or four carpets per month. Work was profitable and in high demand to the extent that buyers would order carpets in advance,” she said. According to Umm Hassan, completing the work on a carpet took about two weeks and in the '80s and '90s the carpets cost about $40 each, a relatively expensive price at the time.

However, time and circumstances conspired against Umm Hassan, and she got tired. She was no longer able to work, except for limited periods, given the absence of opportunities that could capitalize on her expertise and train a new generation to master the skills of this traditional industry.

Umm Hassan makes rugs using a manual machine called “Al-Saddah” or “Al-Jouma,” which is made out of four wooden sticks that are tightly fixed onto the floor. These sticks are tied by ropes, and the weaving process starts with the use of a comb whose teeth are held together with a gear.

The work is complex and tiring, and it starts by finding the yarn used in weaving carpets. Umm Hassan explained this stage of production, saying, “We buy sheep wool from farmers, and we tint it with special dyes, then we spin it manually in the form of filaments.”

A close examination of the textile material, colors and embroidery vouch for the manual effort that is put into making the carpets, and the latter’s popularity.

Iraq has been famous for its handmade carpets industry, which was a matter of cultural and aesthetic interest among intellectuals and scholars. The government started supervising the industry in 1993 following the founding of the Iraqi Carpet House, which has expanded since 1997 to become the State Company for Woolen Industries, based in the Kadhimiya district of Baghdad.

Nevertheless, the industry today is in danger of extinction.

This was confirmed by carpet vendor Salem Obeid of Babil, who told Al-Monitor that “the number of weavers has receded, and there are only a few professional women [weavers] left in small towns such as western al-Hamza, while male weavers disappeared in the 1990s.”

Obeid added, “Ten years ago, [his] shop was full of handmade carpets that were in high demand from traders and carpet collectors both inside and outside Iraq, but today, about 80% of the carpets in [his] shop are made by modern machines and imported from Turkey, Egypt and Iran.”

“The number of foreign visitors has declined because of the security situation and political turmoil in Iraq,” he added.

Obeid said that one of the reasons for the decline of the handmade carpet industry is “women’s unwillingness to learn and practice, due to lower demand compared with the 1980s and 1990s.”

In another shop in western al-Hamza, trader Abu Walid al-Midhatti exhibits several kinds of handmade carpets. He told Al-Monitor, “The prices range from $100 to $600 depending on the quality, size and weaving precision of the carpet, which is [only] bought by government institutions, foreign companies and embassies.”

Despite the sad fate of the industry, it is rare to find an Iraqi house without a handmade carpet, for Iraqi families consider carpets — which are passed down generation to generation — as a treasured item that they hold on to.

A tour of the carpet shops in the cities of Iraq confirms the attractiveness of the Iraqi hand-woven carpets, which directly catch the eye with their traditional embroideries and bright colors.

In a shop called Sajjad al-Zahra (Al-Zahra Carpets) in western al-Hamza, one can find pieces of carpet bearing religious symbols such as images of Muslim holy places, as well as ones with Babylonian and Sumerian forms and Quranic verses.

Al-Monitor had the opportunity to check out the popular carpets after Rahima al-Asadi, a primary school teacher and a folkloric productions amateur who owns around 10 pieces of rare carpets, allowed us to visit her mother’s house in Babil; she owns carpets that are 100 years old that she inherited from her family.

In an interview with Al-Monitor, Asadi called for the setting up of “projects to revive the [carpet weaving] industry, as it is part of the folk culture of our people and can generate hard currency.”

In this context, Babil Provincial Council member Suhaila Abbas spoke to Al-Monitor about “a manual carpet factory, which was established in western al-Hamza and allowed her to bring together poor female carpet weavers. This factory contributes to preventing the extinction of this profession and creates job opportunities for women.”

Al-Monitor visited the factory, which looked like a high-roofed building covering a wide hall full of hand-weaving machines. As we toured the place, we learned that it includes about 300 workers and that it exports the finest types of carpets to the Arab and international markets.

Factory supervisor Kazem al-Badr al-Saabari clarified the nature of the work at the factory to Al-Monitor, saying, “The factory only includes female weavers, mainly for social reasons, as mixing is difficult in such a profession.”

It seems as if the carpet-weaving history in Iraq has now been reduced to mere memories. Looking closely, one might realize that the handmade carpet industry is not the only one threatened with extinction, as there are many traditional crafts that might suffer the same fate, such as pottery making and metalworking and polishing. There should be projects aimed at revitalizing this industry, providing support to those who master it and establishing training courses to hand down the skills to new generations.

As it stands, except for the textile manufacturing factories in Babil and Erbil, there are no institutions that teach carpet weaving in Iraq.