President Hassan Rouhani's minority affairs adviser has caused a stir by visiting a synagogue and suggesting reverting to Iran's flag from before the revolution, raising the ire of conservatives. 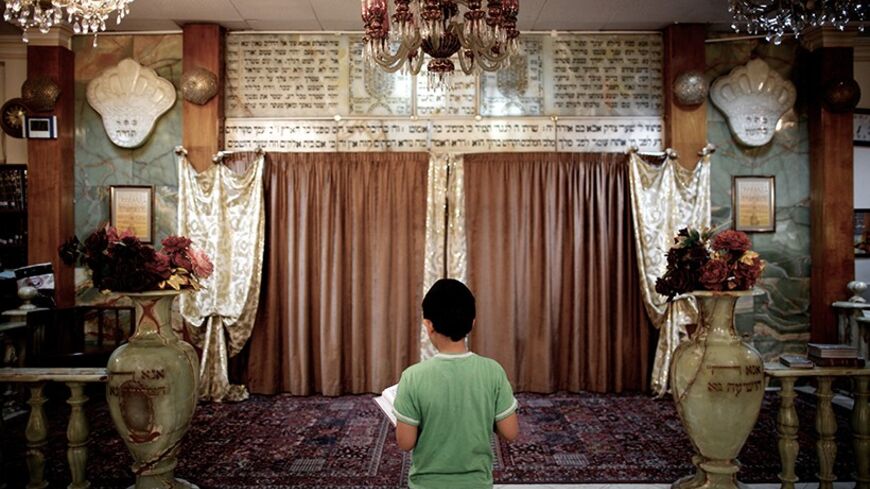 A boy reads the Torah at a synagogue in downtown Tehran, Sept. 24, 2013. - BEHROUZ MEHRI/AFP/Getty Images

Iranian President Hassan Rouhani’s senior adviser for ethnic and religious minority affairs, Ali Younesi, recently visited a synagogue in Shiraz and expressed his support for using Iran’s pre-revolution flag. Both his appearance in the synagogue and his words were harshly criticized by radical Principlists.

Younesi, who also served as the minister of intelligence under former President Mohammad Khatami, traveled to the historic city of Shiraz on May 4 and defended the pre-revolutionary “lion and sun” flag, saying, “Some people believed that the lion and sun in the middle of the Iranian flag was a monarchic symbol, but this is not the case. The lion represents Imam Ali [the first Shiite imam] and the sun represents Prophet Muhammad; only the crown was a symbol of monarchy.”

The lion and sun was Iran’s national symbol until the 1979 revolution. After the revolution, Islamists claimed the symbol represented the monarchy and removed it from the Iranian flag, replacing it with the Islamic crescent.

Younesi riled the conservatives by saying, “If it were up to me, I would replace the crescent with the lion and sun.”

His words were criticized by the Principlists, who oppose the Rouhani administration’s cultural policies. The right-wing media was provided with plenty of fodder to attack Younesi. Fars News Agency published parts of Ayatollah Khomeini’s speech from late 1979 in which he said, “The flag of Iran should not be a monarchist flag. The symbols should not be related to monarchy. The symbols should be Islamic. This cursed lion and sun symbol should be removed from all the ministries and offices. Anything resembling monarchy should be removed. The flag of Islam should be up.” Fars accused Younesi of opposing the leader of the Islamic revolution.

A member of Shahid Beheshti University's history department who wished to remain anonymous told Al-Monitor, “In the emotional post-revolutionary atmosphere of 1979, the lion and sun symbol became a symbol for the regime of Mohammad Reza Pahlavi. The revolutionaries who were set to destroy anything resembling the previous government thought that they needed to destroy this symbol as well.”

The symbol first came into use during the Safavid era in the 16th century, under Shah Ismail II. The Safavid dynasty made Shiite Islam the official religion of Iran, and the Islamic Republic holds them in high regard.

Nonetheless, the reaction to Younesi’s words was harsh. For example, Ali Taheri, a cleric and parliament member from Gorgan, said on the parliament floor, “If Mr. Younesi cannot control his tongue, then the president should think about replacing him.”

A journalist formerly of the recently banned newspaper Ghanoon told Al-Monitor, “The hysteric reactions of the Principlist officials and the media are all fueled by the fact that Younesi went to a synagogue and gave a speech there. They cannot tolerate an official appearing among the Jews, defending their rights and talking to them about Islam. The whole lion-and-sun controversy is an excuse. They are using this issue to weaken Younesi.”

Last October, Rouhani appointed Younesi to the adviser post, a position that Rouhani himself created. Younesi has previously met with myriad ethnic and religious minorities including the Sunnis, Kurds, Baluchis and the Jews, and has spoken publicly about their rights as citizens of Iran.

His strong defense of Iranian minority rights and his synagogue visit are noteworthy considering his past. During the 1980s, he held important judiciary and intelligence posts, such as the head of the Islamic Revolutionary Court. Younesi was appointed minister of intelligence in 1999 by Reformist President Khatami after Ghorbanali Dorri-Najafabadi was forced to resign over the Chain Murders. Younesi remained in this post until 2005.

During his visit to the synagogue, Younesi carefully criticized the discriminatory policies of the government, saying, "Iranians have lived together for years with grace and tolerance. If I, as a Muslim cleric, and you, as a Jewish rabbi, stay aside, people will coexist peacefully."

His comments were criticized by Hossein Shariatmadari, chief editor of Kayhan, a major right-wing publication in Iran. In an editorial titled, “Give Back the Horse and the Sword,” he said Younesi’s comments would cause distrust regarding the Islamic Republic's treatment of minorities. He asked, "What religious character has said anything negative about our Jewish countrymen? Who has stopped them from practicing their religion?"

Younesi, however, did not answer Shariatmadari’s question. Probably because soon after the editorial was published, a powerful and radical Iranian cleric, Mojtaba Zolghadr, criticized Younesi’s comments and verbally attacked Iran's Jewish minority.

Zolghadr, the former representative of Ayatollah Khamenei in the Revolutionary Guard Corps, told Tasnim news agency, “Mr. Younesi has said this stuff to satisfy the Jews. The Jews like it when someone insults the Prophet or Ahl al-Bayt [people of the house]. They are using these corruptions in people’s beliefs for political purposes. We are Shiite, and in our religion the end does not justify the means. Therefore, we should not play with people’s beliefs only to satisfy a corrupt group.”

Hossein Naghashi, a Reformist political activist, told Al-Monitor that Younesi’s comments highlight the two distinct views present in the power structure of Iran. “One point of view regards the minorities and their rights as a security issue and as a threat. The other point of view insists on citizenship rights and believes that the mosaic-like structure of Iranian society, with its various cultural, ethnic and religious elements, is not a problem and can instead be used to promote national unity,” he said.

According to Naghashi, Younesi has always belonged to the second group. “He has expanded this view to other minorities, including the Jewish community. Him visiting the Jewish synagogue promoted different reactions both outside and inside of the country. On the other hand, people like Mr. Shariatmandari belong to the first group. Their criticism of Younesi has its roots in the disagreement between these two viewpoints.”

This confrontation between the Principlists and Younesi shows how deeply troubled the Principlists are with Younesi’s activities regarding minorities’ rights. It is worth mentioning that Younesi’s son, Hossein, took part in the post-election street protests in 2009 and was arrested and sentenced to three years of discretionary imprisonment. Younesi never criticized his son’s actions, and his silence was interpreted as support for the protesters and the leaders of the Green Movement, Mir-Hossein Mousavi and Mehdi Karroubi.

A political activist in Tehran said, “I believe that Younesi has an easier time crossing the ‘red lines’ regarding the minorities because of his background in the judiciary and the intelligence service. No doubt, however, the radicals will strongly oppose him if he continues this line of action. They know that Younesi wants to make real changes and they are going to strongly oppose him.”